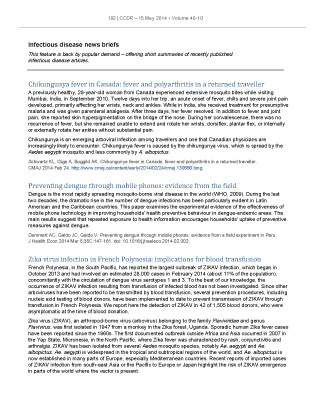 This feature is back by popular demand - offering short summaries of recently published infectious disease articles.

Chikungunya fever in Canada: fever and polyarthritis in a returned traveller

A previously healthy, 28-year-old woman from Canada experienced extensive mosquito bites while visiting Mumbai, India, in September 2010. Twelve days into her trip, an acute onset of fever, chills and severe joint pain developed, primarily affecting her wrists, neck and ankles. While in India, she received treatment for presumptive malaria and was given parenteral analgesia. After three days, her fever resolved. In addition to fever and joint pain, she reported skin hyperpigmentation on the bridge of the nose. During her convalescence, there was no recurrence of fever, but she remained unable to extend and rotate her wrists, dorsiflex, plantar flex, or internally or externally rotate her ankles without substantial pain.

Chikungunya is an emerging arboviral infection among travellers and one that Canadian physicians are increasingly likely to encounter. Chikungunya fever is caused by the chikungunya virus, which is spread by the Aedes aegypti mosquito and less commonly by A. albopictus.

Preventing dengue through mobile phones: evidence from the field

Dengue is the most rapidly spreading mosquito-borne viral disease in the world (WHO, 2009). During the last two decades, the dramatic rise in the number of dengue infections has been particularly evident in Latin American and the Caribbean countries. This paper examines the experimental evidence of the effectiveness of mobile phone technology in improving households' health preventive behaviour in dengue-endemic areas. The main results suggest that repeated exposure to health information encourages households' uptake of preventive measures against dengue.

French Polynesia, in the South Pacific, has reported the largest outbreak of ZIKAV infection, which began in October 2013 and had involved an estimated 28,000 cases in February 2014 (about 11% of the population), concomitantly with the circulation of dengue virus serotypes 1 and 3. To the best of our knowledge, the occurrence of ZIKAV infection resulting from transfusion of infected blood has not been investigated. Since other arboviruses have been reported to be transmitted by blood transfusion, several prevention procedures, including nucleic acid testing of blood donors, have been implemented to date to prevent transmission of ZIKAV through transfusion in French Polynesia. We report here the detection of ZIKAV in 42 of 1,505 blood donors, who were asymptomatic at the time of blood donation.

Zika virus (ZIKAV), an arthropod-borne virus (arbovirus) belonging to the family Flaviviridae and genus Flavivirus, was first isolated in 1947 from a monkey in the Zika forest, Uganda. Sporadic human Zika fever cases have been reported since the 1960s. The first documented outbreak outside Africa and Asia occurred in 2007 in the Yap State, Micronesia, in the North Pacific, where Zika fever was characterized by rash, conjunctivitis and arthralgia. ZIKAV has been isolated from several Aedes mosquito species, notably Ae. aegypti and Ae. albopictus. Ae. aegypti is widespread in the tropical and subtropical regions of the world, and Ae. albopictus is now established in many parts of Europe, especially Mediterranean countries. Recent reports of imported cases of ZIKAV infection from south-east Asia or the Pacific to Europe or Japan highlight the risk of ZIKAV emergence in parts of the world where the vector is present.

WHO statement on the international spread of wild poliovirus

In the context of the global polio eradication initiative, the (International Health Regulations Emergency) Committee advised that the international spread of polio ... constitutes an 'extraordinary event' ... for which a coordinated international response is essential. If unchecked, this situation could result in failure to eradicate globally one of the world’s most serious vaccine preventable diseases...

Pakistan, Cameroon, and the Syrian Arab Republic pose the greatest risk of further wild poliovirus exportations in 2014... Afghanistan, Equatorial Guinea, Ethiopia, Iraq, Israel, Somalia and particularly Nigeria... pose an ongoing risk for new wild poliovirus exportations in 2014. (All of) These States should encourage residents and long-term visitors to receive a dose of OPV or IPV 4 weeks to 12 months prior to international travel.