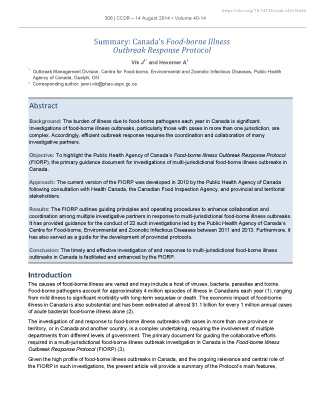 Background: The burden of illness due to food-borne pathogens each year in Canada is significant. Investigations of food-borne illness outbreaks, particularly those with cases in more than one jurisdiction, are complex. Accordingly, efficient outbreak response requires the coordination and collaboration of many investigative partners.

Approach: The current version of the FIORP was developed in 2010 by the Public Health Agency of Canada following consultation with Health Canada, the Canadian Food Inspection Agency, and provincial and territorial stakeholders.

Results: The FIORP outlines guiding principles and operating procedures to enhance collaboration and coordination among multiple investigative partners in response to multi-jurisdictional food-borne illness outbreaks. It has provided guidance for the conduct of 22 such investigations led by the Public Health Agency of Canada's Centre for Food-borne, Environmental and Zoonotic Infectious Diseases between 2011 and 2013. Furthermore, it has also served as a guide for the development of provincial protocols.

Conclusion: The timely and effective investigation of and response to multi-jurisdictional food-borne illness outbreaks in Canada is facilitated and enhanced by the FIORP.

The investigation of and response to food-borne illness outbreaks with cases in more than one province or territory, or in Canada and another country, is a complex undertaking, requiring the involvement of multiple departments from different levels of government. The primary document for guiding the collaborative efforts required in a multi-jurisdictional food-borne illness outbreak investigation in Canada is the Food-borne Illness Outbreak Response Protocol (FIORP) Footnote 3.

Given the high profile of food-borne illness outbreaks in Canada, and the ongoing relevance and central role of the FIORP in such investigations, the present article will provide a summary of the Protocol's main features, including its purpose and guiding principles, stakeholder roles and responsibilities, and investigation operating procedures.

The FIORP was first developed in 1999 and was subsequently revised in 2006 to incorporate the role of the Public Health Agency of Canada after the Agency's creation in 2004. The current FIORP document was updated in 2010 following a consultative process with federal/provincial/territorial stakeholders, including the Council of Chief Medical Officers of Health and the Federal/Provincial/Territorial Deputy Ministers of Health.

Food safety and public health are areas of shared jurisdiction among all levels of government in Canada. As a result, the identification of and response to multi-jurisdictional food-borne illness outbreaks requires active collaboration among a large number of players. The FIORP applies to enteric outbreaks in Canada when cases are reported in more than one province or territory, or in Canada and another country, and multiple agencies are involved. The scope of the FIORP includes determining the potential existence for a multi-jurisdictional food-borne illness outbreak through to the post-outbreak review process.

The objectives of the FIORP are to enhance collaboration and coordination among partners, establish clear lines of communication, and improve the efficiency and effectiveness of the outbreak response. To meet these objectives, the FIORP delineates the roles and responsibilities of investigative partners (Table 1) and provides detailed operating procedures for coordinating the response to a potential multi-jurisdictional food-borne illness outbreak. While the FIORP serves to guide the collaboration of partners in the identification of and response to such outbreaks, including guidance on notification of partners, communication and information-sharing, it does not provide detailed instructions for the conduct of an outbreak investigation. The FIORP can also be used as a model for provinces and territories to develop their own food-borne illness outbreak response protocols when multiple jurisdictions or organizations within a single province or territory are involved.

A guiding principle of the FIORP is that an Outbreak Investigation Coordinating Committee serves as the main forum for sharing and interpreting information in an outbreak investigation. The Committee comprises representatives designated to act on behalf of the partners from the different departments and levels of government involved in a given outbreak investigation. These representatives may be from the Public Health Agency of Canada, Health Canada, the Canadian Food Inspection Agency, provincial/territorial public health and agricultural departments, or local public health units. Expertise from other agencies, such as those involved in emergency response or the Royal Canadian Mounted Police, is sought as needed. Representation on an Outbreak Investigation Coordinating Committee includes those with expertise in epidemiology, microbiology, food safety and communications.

Another guiding principle central to the FIORP is that laboratory, epidemiologic or food safety evidence is used to establish the association between illness and a particular food as the source of an outbreak. The Public Health Agency of Canada, as the Outbreak Investigation Coordinating Committee lead, is responsible for coordinating the epidemiologic investigations of food-borne illness outbreaks, including the overall collation and analyses of epidemiologic data, in collaboration with the affected partners. Food safety investigations are undertaken by the Canadian Food Inspection Agency or the appropriate regulatory officials within the affected jurisdiction. Each partner is responsible for conducting appropriate laboratory testing of clinical and food samples, and sharing the results for discussion with the Committee.

Health Canada is responsible for carrying out a health risk assessment of a food that is suspected of being the source of an outbreak. Epidemiologic, microbiologic and food safety data are considered in the assessment, which in turn determines the level of risk posed by the suspected source/implicated food. Health risk assessment decisions are shared with the Outbreak Investigation Coordinating Committee and are used to inform public health action. Public health and food safety actions to address the source of a food-borne illness outbreak may include issuing a recall, detaining a product, disposing of food, public communication regarding prevention and control measures, case and contact management, and prophylaxis (e.g. vaccination for hepatitis A contacts), as well as the review and enhancement of industry procedures and requirements, and the updating and/or development of new government policies, standards or guidelines.

A new feature of the 2010 FIORP was the addition of the option for any partner involved in an outbreak response to request a post-outbreak review. Such reviews, generally chaired by the Outbreak Investigation Coordinating Committee lead, provide an opportunity for partners to examine what worked well and what could have been improved in a particular investigation. Committee partners may identify measures to prevent recurrence, such as new or revised policies or standards; assess the need for further scientific studies; develop improved practices for future investigations; and recommend improvements or adjustments to the FIORP.

Since being revised in 2010, the FIORP has served as the guiding protocol for 22 Outbreak Investigation Coordinating Committees led by the Centre for Food-borne, Environmental and Zoonotic Infectious Diseases, Public Health Agency of Canada, between 2011 and 2013. These outbreak investigations have involved both domestic and international partners, and implicated pathogens have included E. coli, Salmonella, Listeria, Cyclospora and hepatitis A. The FIORP is currently undergoing review, and a revised version will be developed. The Public Health Agency of Canada, as the custodian of the FIORP, will oversee this process through collaborative engagement of key partners and incorporation of recommendations received through post-outbreak reviews.

The FIORP plays an essential role in the effective investigation of and response to multi-jurisdictional food-borne illness outbreaks in Canada. Scheduled review of its provisions ensures that it can adapt to changing realities and provides a means to incorporate post-outbreak recommendations and lessons learned.