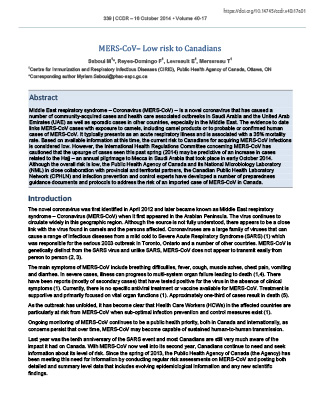 Middle East respiratory syndrome - Coronavirus (MERS-CoV) - is a novel coronavirus that has caused a number of community-acquired cases and health care associated outbreaks in Saudi Arabia and the United Arab Emirates (UAE) as well as sporadic cases in other countries, especially in the Middle East. The evidence to date links MERS-CoV cases with exposure to camels, including camel products or to probable or confirmed human cases of MERS-CoV. It typically presents as an acute respiratory illness and is associated with a 35% mortality rate. Based on available information at this time, the current risk to Canadians for acquiring MERS-CoV infections is considered low. However, the International Health Regulations Committee concerning MERS-CoV has cautioned that the upsurge of cases seen this past spring (2014) may be predictive of an increase in cases related to the Hajj - an annual pilgrimage to Mecca in Saudi Arabia that took place in early October 2014. Although the overall risk is low, the Public Health Agency of Canada and its National Microbiology Laboratory (NML) in close collaboration with provincial and territorial partners, the Canadian Public Health Laboratory Network (CPHLN) and infection prevention and control experts have developed a number of preparedness guidance documents and protocols to address the risk of an imported case of MERS-CoV in Canada.

The novel coronavirus was first identified in April 2012 and later became known as Middle East respiratory syndrome - Coronavirus (MERS-CoV) when it first appeared in the Arabian Peninsula. The virus continues to circulate widely in this geographic region. Although the source is not fully understood, there appears to be a close link with the virus found in camels and the persons affected. Coronaviruses are a large family of viruses that can cause a range of infectious diseases from a mild cold to Severe Acute Respiratory Syndrome (SARS) Footnote 1 which was responsible for the serious 2003 outbreak in Toronto, Ontario and a number of other countries. MERS-CoV is genetically distinct from the SARS virus and unlike SARS, MERS-CoV does not appear to transmit easily from person to person Footnote 2,Footnote3.

The main symptoms of MERS-CoV include breathing difficulties, fever, cough, muscle aches, chest pain, vomiting and diarrhea. In severe cases, illness can progress to multi-system organ failure leading to death Footnote 1,Footnote 4. There have been reports (mostly of secondary cases) that have tested positive for the virus in the absence of clinical symptoms Footnote 1. Currently, there is no specific antiviral treatment or vaccine available for MERS-CoV. Treatment is supportive and primarily focused on vital organ functions Footnote 1. Approximately one-third of cases result in death Footnote 5.

As the outbreak has unfolded, it has become clear that Health Care Workers (HCWs) in the affected countries are particularly at risk from MERS-CoV when sub-optimal infection prevention and control measures exist Footnote 1.

Ongoing monitoring of MERS-CoV continues to be a public health priority, both in Canada and internationally, as concerns persist that over time, MERS-CoV may become capable of sustained human-to-human transmission.

Last year was the tenth anniversary of the SARS event and most Canadians are still very much aware of the impact it had on Canada. With MERS-CoV now well into its second year, Canadians continue to need and seek information about its level of risk. Since the spring of 2013, the Public Health Agency of Canada (the Agency) has been meeting this need for information by conducting regular risk assessments on MERS-CoV and posting both detailed and summary level data that includes evolving epidemiological information and any new scientific findings.

The purpose of this risk assessment summary is to describe the methodology, the assessment of the risk, the risk mitigation and leading to the current risk-level of MERS-CoV to Canadians residing in the country.

Summary of the risk event

Cases of MERS-CoV have been detected primarily in the Middle East, specifically in the Kingdom of Saudi Arabia (KSA) and also in Jordan, Qatar, the UAE, Kuwait, Yemen, Oman, Lebanon and Iran. Travel-related cases have also been reported by eleven countries: Europe (the United Kingdom, France, Italy, Greece, Germany and the Netherlands), North Africa (Tunisia, Egypt and Algeria), Southeast Asia (Malaysia) and North America (the United States of America) (5). Limited secondary transmission has been reported in only two of the previously mentioned countries (10). There have been no cases identified in Canada (Figure 1).

Figure 1: Worldwide geographical distribution of MERS-CoV cases, as of September 23, 2014 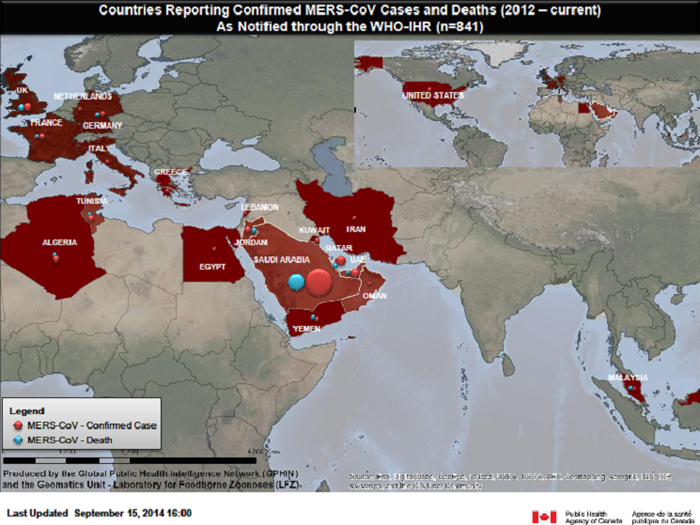 Based on available case-level data from the WHO Footnote 5, the majority of cases have been adult males (median age in the mid- to late-40s) with comorbidities and who exhibit a tendency to experience more severe illness and poorer outcomes than those without. Individuals with diabetes, renal failure and chronic lung disease as well as immunocompromised persons are at higher risk of severe disease from MERS-CoV infection. Secondary cases generally present with milder disease or no symptoms; however severe illness, including death, has been observed in secondary cases including healthcare workers (HCWs). The case fatality proportion is 35%.

Evidence from camel serology studies and genetic sequencing of the virus suggests that camels are likely a primary source for MERS-CoV infections in humans. Other animal studies have not detected MERS-CoV antibodies, including those involving sheep, cows, goats, water buffalo, swine and wild birds Footnote 12. Persons having had contact with camels or camel products (e.g. raw milk or meat, secretions or excretions (including urine)) are at increased risk of infection with MERS-CoV. Transmission patterns of secondary cases in healthcare settings and households have also been shown to be at increased risk of infection Footnote 5. On June 13, 2014 the WHO reported evidence supporting the role of camels as a primary reservoir responsible for the ongoing introduction of the virus to the human population that does not result in sustained transmission Footnote 12. Only a few instances of transmission within households have been reported and no large family clusters have been identified Footnote 5.

According to Breben et al (2013), the virus' reproductive number (R0) was found to be less than one (R0 = 0.60) and was also inferior to the reproductive number of SARS (R0 = 0.80) Footnote 13. However, the authors cautioned that MERS-CoV's R0 may increase with population density and may also be affected by community age and contact structure. Cauchemez et al (2013) obtained similar R0 estimates for MERS-CoV epidemic potential, but found that R0 values increased when infection control measures were not in place Footnote 14. In addition, transmissibility may increase in populations with comorbidities and R0's may be underestimated if cases received an intervention soon after onset. The authors concluded that while MERS-CoV is a slowly growing epidemic, intensive public health measures around cases paired with improved diagnostic techniques would be sufficient to contain the spread of the disease and mitigate morbidity and mortality.

Based on the best available information, the current risk to Canadians for acquiring MERS-CoV infections is considered low. This assessment is based on the following observations and facts:

In the event of an importation of MERS-CoV to Canada, the Agency and the National Microbiology Laboratory (NML) in close collaboration with provincial and territorial partners (PT), the Canadian Public Health Laboratory Network (CPHLN) and infection prevention and control experts have developed a number of preparedness guidance documents and protocols (Table 2). Since 2009, Canada and its PT partners have established robust surveillance and communications systems designed to detect and report emerging pathogens such as MERS-CoV utilizing the Severe Acute Respiratory Infection (SARI) surveillance system. In addition, the PHAC-CIHR Influenza Research (PCIRN) Serious Outcome Surveillance (SOS) Network consisting of 45 participating adult hospitals across Canada is designed to detect SARI hospital ICU admissions.

Recent investigative findings on MERS-CoV support the theory that camels play a significant role in the ongoing transmission of the virus. However, there are several instances where an exposure to camels could not be found. Therefore, the human animal interface in this event requires further study to better understand risk factors and the underlying mechanisms associated with transmission and also to identify effective measures in the prevention of further zoonotic spread Footnote 1. Outbreak investigations will need to focus on contact tracing to identify mild or asymptomatic cases and to increase knowledge of potential risk of further transmission Footnote 5. This information is required to accurately determine the best use of public health resources should an importation occur in Canada.

Concerns continue around the possible transmission of MERS-CoV during mass-gathering events such as the Hajj and the performance of Umrah in Saudi Arabia. However, a seroprevalence study conducted in 2013 in adult pilgrims during that year's Hajj did not detect MERS-CoV in any of the 5,235 samples tested Footnote 19. Further, there have been no reported confirmed cases of MERS-CoV associated with the 2012 and 2013 Hajj pilgrimages. The upsurge of cases seen this past spring suggesting increased community circulation may be predictive of a proportionate increase in cases related to the upcoming Hajj event between October 1st and October 6th, 2014 Footnote 16.

There was an equal contribution from all four authors. The authors would like to acknowledge the WHO IHR Regional Contact point and the Canada-IHR Focal Point for providing the number of confirmed cases and deaths due to MERS-CoV by country.