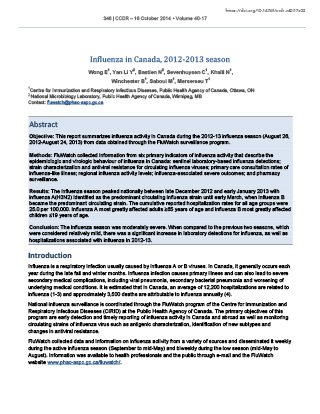 Objective: This report summarizes influenza activity in Canada during the 2012-13 influenza season (August 26, 2012-August 24, 2013) from data obtained through the FluWatch surveillance program.

Results: The influenza season peaked nationally between late December 2012 and early January 2013 with influenza A(H3N2) identified as the predominant circulating influenza strain until early March, when influenza B became the predominant circulating strain. The cumulative reported hospitalization rates for all age groups were 25.0 per 100,000. Influenza A most greatly affected adults ≤65 years of age and influenza B most greatly affected children ≤19 years of age.

Conclusion: The influenza season was moderately severe. When compared to the previous two seasons, which were considered relatively mild, there was a significant increase in laboratory detections for influenza, as well as hospitalizations associated with influenza in 2012-13.

Influenza is a respiratory infection usually caused by influenza A or B viruses. In Canada, it generally occurs each year during the late fall and winter months. Influenza infection causes primary illness and can also lead to severe secondary medical complications, including viral pneumonia, secondary bacterial pneumonia and worsening of underlying medical conditions. It is estimated that in Canada, an average of 12,200 hospitalizations are related to influenza Footnote 1-3 and approximately 3,500 deaths are attributable to influenza annually Footnote 4.

National influenza surveillance is coordinated through the FluWatch program of the Centre for Immunization and Respiratory Infectious Diseases (CIRID) at the Public Health Agency of Canada. The primary objectives of this program are early detection and timely reporting of influenza activity in Canada and abroad as well as monitoring circulating strains of influenza virus such as antigenic characterization, identification of new subtypes and changes in antiviral resistance.

FluWatch collected data and information on influenza activity from a variety of sources and disseminated it weekly during the active influenza season (September to mid-May) and biweekly during the low season (mid-May to August). Information was available to health professionals and the public through e-mail and the FluWatch website.

This report provides an epidemiologic and virologic summary of influenza activity in Canada during the 2012 - 2013 season.

This report is based on the six primary indicators of influenza activity reported by the FluWatch program on a weekly basis across Canada and between August 26, 2012 (week 35) and August 24, 2013 (week 34): (I) sentinel laboratory-based influenza and other respiratory virus detections; (II) strain characterization and antiviral resistance for circulating influenza viruses; (III) primary care consultation rates of influenza-like illness (ILI) by sentinel practitioners; (IV) regional influenza activity levels; (V) influenza-associated hospitalizations and deaths; and (VI) pharmacy surveillance.

These data sets come from ongoing public health surveillance and are exempt from research ethics board approval.

Figure 1: Percentage of laboratory detections of influenza in Canada, by type and subtype, 2012-13

Figure 2: Sentinel laboratory detections of influenza in Canada, by week and type/subtype, 2012-13 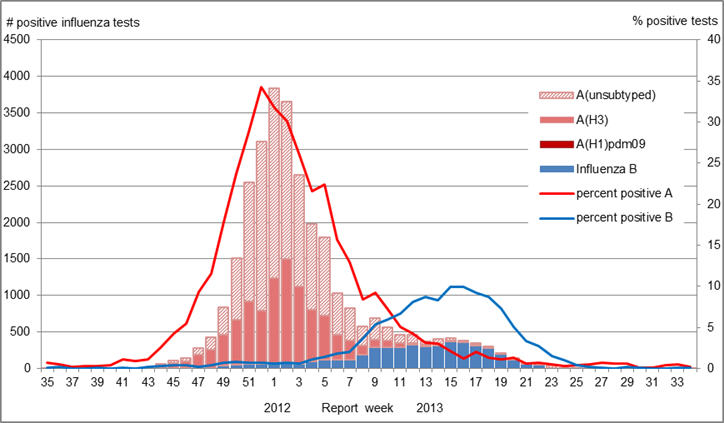 The relative proportion of each type and subtype circulating and the time that influenza activity peaked varied by geographic region. The percentage of positive specimens was highest in week 52 for parts of western and central Canada (British Columbia, Alberta, Ontario, Quebec) and Newfoundland. The proportion of positive tests was highest in Saskatchewan in week 2, Manitoba in week 3 and in the remaining Atlantic provinces in week 5 for New Brunswick and week 6 for PEI and Nova Scotia. Influenza A was the predominant strain in all the provinces for the season, with the proportion of laboratory tests positive for Influenza A ranging from 72.2% in Saskatchewan to 99.2% in PEI. From case-based data, for which laboratory data for the territories can be identified, influenza activity appears to have peaked in Nunavut in week 5 (January 27-February 2, 2013) and in Northwest Territories in week 17 (April 21 - 27, 2013). No data is available for Yukon Territory.

The peak ILI consultation rate was 67.7 per 1,000 patient visits and occurred during the week ending December 29, 2012 (week 52), similar to the peak percentage of laboratory tests positive for influenza ( Figure 3 ). The weekly ILI consultation rates exceeded the expected range, based on mean observations rates for the previous seasons since 1996 - 97 (excluding rates from the pandemic period), in week 48 and between weeks 52 (2012) and week 5 (2013). Weekly ILI consultations rates remained within or below the expected range for the rest of the season. 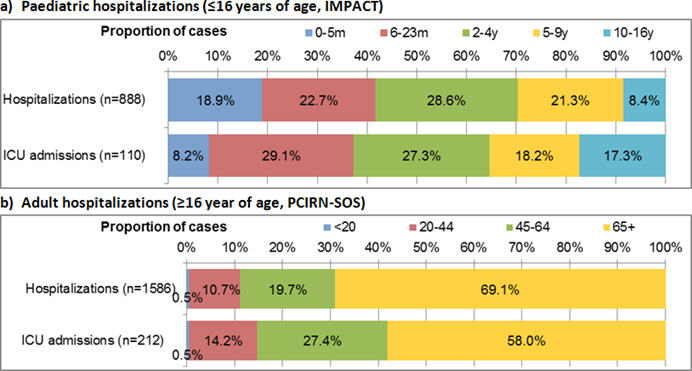 Of the 889 children hospitalized, 70% (n=624) were younger than five years of age and 47% (n=419) were healthy prior to infection. A total of 329 hospitalized children had underlying health conditions for which influenza immunization is recommended by the National Advisory Committee on Immunization Footnote 5. Only one paediatric death was reported. 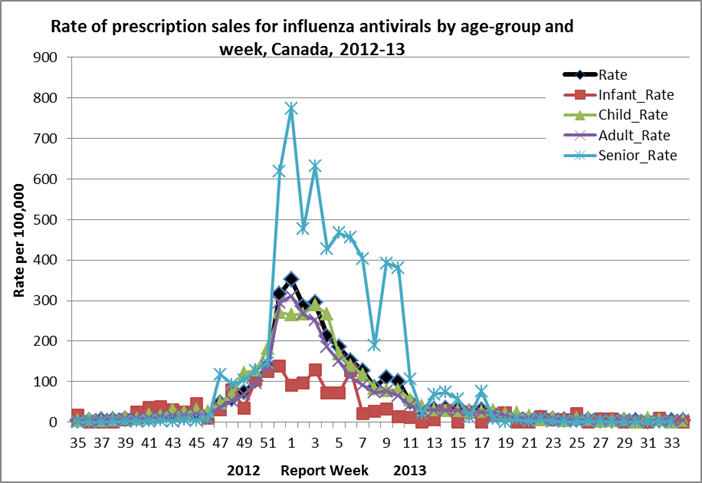 The 2012 - 13 season was moderately severe compared to the previous two seasons Footnote 9,Footnote 10. An increase in the impact of influenza was seen in the number of positive laboratory tests for influenza reported, with almost twice as many positive detections compared to 2010 - 11 and almost three times the detections in 2011 - 12. The same trend was seen in the cumulative rate of hospitalizations and deaths reported by participating provinces and territories. The cumulative hospitalization and death rate per 100,000 was 14.6 and 1.1 respectively in 2010 - 11 and 8.5 and 0.5 for 2011 - 12 (data not published).The number of outbreaks reported this season in hospitals and LTCFs was the highest since 2004 - 05.

Characterization and antiviral resistance testing from the NML suggests that the circulating influenza viruses demonstrated little antigenic drift and remained closely related to the WHO-recommended strains for the 2012 - 13 trivalent influenza vaccine. Despite this antigenic concordance, some studies reported low to moderate vaccine effectiveness during the 2012 -13 season Footnote 6-8. All but a small percentage of viruses tested remained sensitive to neuraminidase inhibitors.

There are a number of limitations that need to be considered when interpreting results from the FluWatch surveillance program. Laboratory testing, surveillance and reporting protocols have varied prior to, during and post-pandemic and vary between provinces and territories. Therefore comparisons of laboratory findings (e.g. percentage of positive tests and number of positive laboratory-confirmed cases) over time as well as differences between jurisdictions need to be interpreted in light of these differences. Several factors affect the number of isolates sent to the NML such as limitations to culture isolates in provincial laboratories and samples of clinical interest. A greater proportion of the early isolates may also be analyzed to get a better understanding of the circulating strains for the coming season. Because only a subset of influenza viruses is characterized by the NML, the distribution of strain information is not representative of influenza detections reported by all laboratories contributing to RVDSS. Age-specific data for ILI consultation rates as well as laboratory testing for influenza may be affected by biases in health care utilization and physician testing behaviour. ILI consultation rates across time and between jurisdictions may vary with sentinel participation, differences in coverage rates as well as the co-circulation of other respiratory viruses. The true number of individuals affected by influenza in the population is not reflected in the data as FluWatch relies on sentinel data sources.

Duplicate reporting of hospitalizations and deaths is possible where a reporting jurisdiction has one or more hospitals participating in IMPACT or PCIRN-SOS. The reason for hospitalization or cause of death reported by provinces and territories does not have to be attributable to influenza for reporting purposes. Not all provinces/territories report aggregate hospitalizations or deaths, which makes these data incomplete at the national level.

There are a number of limitations associated with the data sources used in the FluWatch program, however, these data sources collectively inform influenza epidemiology in Canada over the season and allow for comparison between seasons. The FluWatch program continues to strengthen influenza surveillance in Canada in collaboration with national and international surveillance partners.

The authors gratefully acknowledge and thank all the FluWatch surveillance partners who have participated in the FluWatch program during the 2012-13 influenza season including provincial and territorial health authorities, sentinel laboratories and physicians, IMPACT, PCIRN-SOS, NML and CFEZID.

There are no conflicts of interests to declare.

Funding for FluWatch is provided by the Public Health Agency of Canada with support from in-kind contributions by FluWatch surveillance partners.