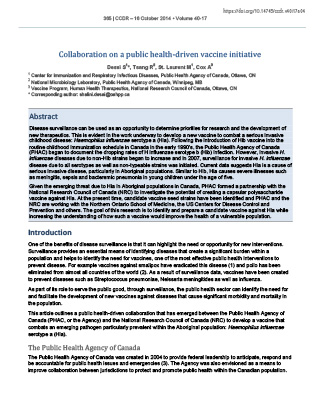 Disease surveillance can be used as an opportunity to determine priorities for research and the development of new therapeutics. This is evident in the work underway to develop a new vaccine to combat a serious invasive childhood disease: Haemophilus influenzae serotype a (Hia). Following the introduction of Hib vaccine into the routine childhood immunization schedule in Canada in the early 1990's, the Public Health Agency of Canada (PHAC) began to document the dropping rates of H influenzae serotype b (Hib) infection. However, invasive H. influenzae diseases due to non-Hib strains began to increase and in 2007, surveillance for invasive H. influenzae disease due to all serotypes as well as non-typeable strains was initiated. Current data suggests Hia is a cause of serious invasive disease, particularly in Aboriginal populations. Similar to Hib, Hia causes severe illnesses such as meningitis, sepsis and bacteremic pneumonia in young children under the age of five.

Given the emerging threat due to Hia in Aboriginal populations in Canada, PHAC formed a partnership with the National Research Council of Canada (NRC) to investigate the potential of creating a capsular polysaccharide vaccine against Hia. At the present time, candidate vaccine seed strains have been identified and PHAC and the NRC are working with the Northern Ontario School of Medicine, the US Centers for Disease Control and Prevention and others. The goal of this research is to identify and prepare a candidate vaccine against Hia while increasing the understanding of how such a vaccine would improve the health of a vulnerable population.

One of the benefits of disease surveillance is that it can highlight the need or opportunity for new interventions. Surveillance provides an essential means of identifying diseases that create a significant burden within a population and helps to identify the need for vaccines, one of the most effective public health interventions to prevent disease. For example vaccines against smallpox have eradicated this disease Footnote 1 and polio has been eliminated from almost all countries of the world Footnote 2. As a result of surveillance data, vaccines have been created to prevent diseases such as Streptococcus pneumoniae, Neisseria meningitides as well as influenza.

As part of its role to serve the public good, through surveillance, the public health sector can identify the need for and facilitate the development of new vaccines against diseases that cause significant morbidity and mortality in the population.

This article outlines a public health-driven collaboration that has emerged between the Public Health Agency of Canada (PHAC, or the Agency) and the National Research Council of Canada (NRC) to develop a vaccine that combats an emerging pathogen particularly prevalent within the Aboriginal population: Haemophilus influenzae serotype a (Hia).

The Public Health Agency of Canada

The Public Health Agency of Canada was created in 2004 to provide federal leadership to anticipate, respond and be accountable for public health issues and emergencies Footnote 3. The Agency was also envisioned as a means to improve collaboration between jurisdictions to protect and promote public health within the Canadian population. Within the Agency, the Centre for Immunization and Infectious Respiratory Diseases (CIRID) Footnote 4 and the National Microbiology Laboratory (NML) Footnote 5 are primarily responsible for providing technical support for vaccine-preventable diseases. CIRID is responsible for epidemiological surveillance of many vaccine-preventable diseases, while NML provides laboratory surveillance, reference diagnostics and research. In cooperation, they provide data on emerging trends for a number of infectious diseases.

The National Research Council of Canada

The NRC began its work to develop vaccine technologies during the 1980's. Its area of expertise has developed over the years to include excellence in carbohydrate chemistry, immunochemistry and in developing partnerships to create new vaccines Footnote 6,Footnote 7,Footnote 8. The NRC has also developed expertise to improve current vaccines and technologies that enable ongoing vaccine innovation. Through the NRC, there are technical and advisory services, research facilities, licensing opportunities as well as program and partnership opportunities. This expertise has been applied to study carbohydrate antigens of encapsulated bacterial pathogens such as Haemophilus influenzae serotype b Footnote 9, Neisseria meningitidis Footnote 6,Footnote 7 and streptococci Footnote 10, which are important pathogens. Each of these pathogens has a polysaccharide capsule that enhances its virulence. In recent years, the NRC has focused on antigen selection, glycoconjugation technologies, adjuvant design and production of vaccine candidates all compatible with current Good Manufacturing Practices (cGMP). The NRC also has the capability to conduct pre-clinical in vivo trials to monitor efficacy and safety of products produced Footnote 11.

Prior to the development of a H. influenzae serotype b (Hib) conjugate vaccine, Hib was a significant cause of meningitis, sepsis and bacteremic pneumonia in children under the age of five years. Based on national surveillance from 1986 - 87, approximately 700 cases of invasive Hib disease occurred per year. Hib vaccines were introduced into the routine childhood immunization schedule in Canada in the early 1990's. Since vaccine introduction, the incidence of Hib disease has dramatically declined. In the last five years where data is available at a national level (2008 - 2012), there has been an average of 26 cases of Hib disease reported across Canada per year Footnote 12. However, based on data from national surveillance programs, invasive H. influenzae diseases due to non-Hib strains have emerged in the last decade Footnote 13. Therefore, in 2007, a revised national case definition of invasive H. influenzae disease to include diseases due to all serotypes as well as non-typeable strains was endorsed Footnote 14.

Among the encapsulated serotypable H. influenzae strains, serotype b has been determined to be the most virulent followed by Hia and then others Footnote 15. Current data suggests H. influenzae serotype a (Hia) is a cause of serious invasive disease, particularly in the Aboriginal population Footnote 16. Similar to Hib, Hia causes severe illness such as meningitis, sepsis and bacteremic pneumonia in young children under the age of five. Since northern Canada has a relatively high indigenous population and Hia, being similar to Hib including its epidemiology, has replaced Hib as a cause of significant burden of invasive diseases in the post-Hib vaccine eraFootnote 17. This trend has also been observed in Alaska, U.S.A.Footnote 18.

Given the knowledge of an emerging threat due to Hia in Aboriginal populations in Canada and with the launch of a Vaccine Program within the NRC's Human Health Therapeutics portfolio, PHAC partnered with the NRC to investigate the potential to create a capsular polysaccharide vaccine against Hia for protection of Canadians. The initial meeting and consultation between PHAC and the NRC was held in 2011 to discuss the feasibility of developing a glycoconjugate vaccine against Hia. In October 2011, a workshop organized by PHAC, the NRC and the Northern Ontario School of Medicine (NOSM) was held at Lakehead University. This workshop included academic researchers from the NOSM and the Thunder Bay Regional Health Authority who discussed two neglected infectious diseases in Aboriginal communities (Hia and Helicobacter pylori) Footnote 19. Based on the groundwork from the initial meetings, a letter of intent on "Expanding Vaccine Development in Canada" was signed between PHAC and the NRC in September 2012 and the joint Hia project was launched in March 2013. In December 2013, investigators from the Arctic Investigators Program of the US Centers for Disease Control and Prevention (CDC) joined the group as they had also observed a similar increase in Hia incidence within the Alaskan Aboriginal population.

At this point in time, candidate vaccine seed strains have been identified and are being characterized at the NML. Large-scale preparation of glycoconjugates based upon the capsular polysaccharide from Hia is now being carried out at the NRC. Serological assays including tests to measure protective immunity are being developed at the NOSM. Immunogenicity studies in animals that have received the glycoconjugates are being conducted at the NRC and sera derived from immunised animals are being evaluated against a range of clinical strains at NOSM.

The goal of this research is to identify and prepare a candidate vaccine against Hia while advancing understanding of how such a vaccine would improve health in a vulnerable population. Work to date has focused on how to provide a better understanding and characterization of the epidemiology of invasive Hia disease through improved surveillance activities. This is being done in collaboration with international partners such as the CDC and the Pan American Health Organization (PAHO). Additionally, on the laboratory side, this work will provide a proof of concept that capsular polysaccharide from Hia can be purified and conjugated to a carrier protein that will induce a protective immune response in experimental animals. Once a candidate vaccine has been shown to be safe and effective in pre-clinical trials, further production would require industry or other third party engagement.

This collaborative project is an excellent example of how government leadership can be effective in addressing a public health need. It also shows how identifying a Canadian research agenda can be expanded and applied internationally. Through surveillance, PHAC has the ability to identify opportunities for new vaccine strategies. The NRC has the technical expertise to develop and produce vaccine candidates. Together with additional partners such as academia and other governmental and non-governmental organizations, this model could lead to further vaccine innovation.

The authors would like to thank John Spika, Jim Richards, Marina Ulanova and Luis Barreto for their work in bringing together this collaborative project.

This work was supported by the Public Health Agency of Canada and the National Research Council of Canada.

Ulanova M, Tsang RSW. Haemophilus influenzae serotype a as a cause of serious invasive infections. The Lancet Infectious Diseases. 2004; 14:70-82.