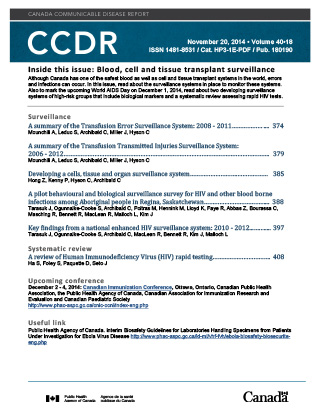 Inside this issue: Blood, cell and tissue transplant surveillance

Although Canada has one of the safest blood as well as cell and tissue transplant systems in the world, errors and infections can occur. In this issue, read about the surveillance systems in place to monitor these systems. Also to mark the upcoming World AIDS Day on December 1, 2014, read about two developing surveillance systems of high-risk groups that include biological markers and a systematic review assessing rapid HIV tests.