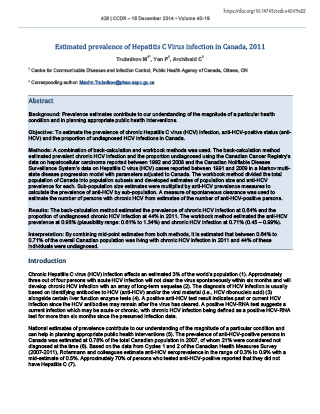 Background: Prevalence estimates contribute to our understanding of the magnitude of a particular health condition and in planning appropriate public health interventions.

Methods: A combination of back-calculation and workbook methods was used. The back-calculation method estimated prevalent chronic HCV infection and the proportion undiagnosed using the Canadian Cancer Registry's data on hepatocellular carcinoma reported between 1992 and 2008 and the Canadian Notifiable Disease Surveillance System's data on Hepatitis C virus (HCV) cases reported between 1991 and 2009 in a Markov multi-state disease progression model with parameters adjusted to Canada. The workbook method divided the total population of Canada into population subsets and developed estimates of population size and anti-HCV prevalence for each. Sub-population size estimates were multiplied by anti-HCV prevalence measures to calculate the prevalence of anti-HCV by sub-population. A measure of spontaneous clearance was used to estimate the number of persons with chronic HCV from estimates of the number of anti-HCV-positive persons.

Interpretation: By combining mid-point estimates from both methods, it is estimated that between 0.64% to 0.71% of the overall Canadian population was living with chronic HCV infection in 2011 and 44% of these individuals were undiagnosed.

Chronic Hepatitis C virus (HCV) infection affects an estimated 3% of the world's population Footnote 1. Approximately three out of four persons with acute HCV infection will not clear the virus spontaneously within six months and will develop chronic HCV infection with an array of long-term sequelae Footnote 2. The diagnosis of HCV infection is usually based on identifying antibodies to HCV (anti-HCV) and/or the viral material (i.e., HCV ribonucleic acid) Footnote 3 alongside certain liver function enzyme tests Footnote 4. A positive anti-HCV test result indicates past or current HCV infection since the HCV antibodies may remain after the virus has cleared. A positive HCV-RNA test suggests a current infection which may be acute or chronic, with chronic HCV infection being defined as a positive HCV-RNA test for more than six months since the presumed infection date.

National estimates of prevalence contribute to our understanding of the magnitude of a particular condition and can help in planning appropriate public health interventions Footnote 5. The prevalence of anti-HCV-positive persons in Canada was estimated at 0.78% of the total Canadian population in 2007, of whom 21% were considered not diagnosed at the time Footnote 6. Based on the data from Cycles 1 and 2 of the Canadian Health Measures Survey (2007-2011), Rotermann and colleagues estimate anti-HCV seroprevalence in the range of 0.3% to 0.9% with a mid-estimate of 0.5%. Approximately 70% of persons who tested anti-HCV-positive reported that they did not have Hepatitis C Footnote 7.

However, the Canadian Health Measures Survey did not cover non-household populations with a higher HCV burden Footnote 8 (e.g., prison inmates, homeless persons and residents of health care facilities) and, with a response rate of just above 52% Footnote 7, the Survey may have under-sampled household populations that were highly affected by HCV (e.g., people who use injection drugs (IDU), chronically ill persons on haemodialysis and immigrants who do not speak English or French). Therefore, the analysis by Rotermann and colleagues Footnote 7 likely underestimated the true anti-HCV seroprevalence in Canada.

Given the length of time since the last HCV prevalence estimates were developed in Canada Footnote 6 and the potential limitations of the analysis by Rotermann and colleagues Footnote 7, this review sought to update estimates of the prevalence of chronic HCV infection, anti-HCV-positive persons and the proportion of undiagnosed cases of chronic HCV infection in Canada.

Back-calculation uses the observed occurrence of subsequent events to make inference about the incidence of the initiating events in the past that lead to them. This method was recently adopted to estimate the incidence of HCV infection in France Footnote 11 and England Footnote 12, where reported data on HCV-associated hepatocellular carcinoma and a Markov multi-state disease progression model were used to back-calculate the historical HCV incidence. We used a back-calculation method with Canadian Cancer Registry's data on hepatocellular carcinoma reported between 1992 and 2008 and a Markov multi-state disease progression model with parameters adjusted to Canada Footnote 13 Footnote 14 to estimate chronic HCV infection prevalence and the proportion of undiagnosed HCV infections in 2011. The prevalence of chronic Hepatitis C per 100 population was estimated with data stratified by 5-year birth cohort according to the date of birth. The overall prevalence was estimated using the same model with all birth cohorts combined. Another back-calculation process with data from the Canadian Notifiable Disease Surveillance System (CNDSS) on HCV cases reported between 1991 and 2009 was run in parallel to ensure the reliability of the estimates of the former. As record-level HCV data from CNDSS was only available for six Canadian provinces and territories that account for 88% of the Canadian population, estimates from the back-calculation were extrapolated to the whole Canadian population.

The total population of Canada was divided into population subsets and size and anti-HCV prevalence estimates were developed for each subset population. Population size estimates were developed using data from published literature and a custom tabulation of the Cycle 1 and 2 data from the Canadian Health Measures Survey (Unpublished data. Public Health Agency of Canada, available from the author upon request). Sources are referenced in Table 1.

The MEDLINE, EMBASE, GLOBAL HEALTH, SCOPUS and PROQUEST PUBLIC HEALTH databases were searched for anti-HCV prevalence measures in the populations of interest in Canada and other developed countries through relevant papers published from 2000-2013 in English or French. Bibliographies of identified studies were also searched for relevant articles in addition to the electronic resources of Statistics Canada, Citizenship and Immigration Canada, Correctional Service Canada, the Public Health Agency of Canada (PHAC) and the Internet. Requests for information were sent to Canadian experts working in the fields of migration health, prison studies, substance abuse, mathematical modelling and Hepatitis C epidemiology.

During the review, anti-HCV seroprevalence measures were ranked as "under-estimates", "over estimates" or as "appropriate estimates" based on a subjective assessment of how representative the study sample was of the population of interest from the description of the study design in the methods section of the reviewed paper. The study outcomes assessed as likely over- or under-estimates were used to bound plausibility ranges of the appropriate estimates Footnote 10.

Other important findings of this analysis include that the birth group of 1950-1970 currently encompasses the bulk of chronic HCV infection in Canada and that the new estimated proportion of persons with undiagnosed chronic HCV infection in 2011 was 44%. This new estimate is approximately twice as high as the one estimated by Remis for 2007 at 21% Footnote 6 and it falls between the estimates for populations which are expected to have high rates of HCV testing such as injection drug users at 20%-43% undiagnosed (Unpublished data. I-Track: Enhanced Surveillance of Risk Behaviours among People who Inject Drugs, Phases 1-3. PHAC. 2013)and populations expected to have lower rates of HCV testing such as hospital patients at 56% undiagnosed Footnote 25 and the weighted estimate for the Canadian household population of 14-79 years old at 69.5% undiagnosed Footnote 7. The estimate of 44% undiagnosed is also within the ranges of the proportion undiagnosed found in Canada in inmates (28-50%) Footnote 26, first time blood donors (42-58% undiagnosed) Footnote 27 and men who have sex with men (44-75% undiagnosed)(Unpublished data M-Track: Enhanced Surveillance of Risk Behaviours among Men who Have Sex with Men, Phases 1-2 PHAC 2013). It is also comparable with the US estimate of the proportion of undiagnosed with anti-HCV-positive status at 50.3% Footnote 28.

The two back-calculation processes used together provided an opportunity to internally calibrate the model outputs to improve the fit with the reported data on HCV cases and cases of hepatocellular carcinoma. The CNDSS data allowed for a more accurate estimate of recent trends, younger birth cohorts and the overall magnitude of the epidemic. The hepatocellular carcinoma data allowed for a more effective model of historical trends, older birth cohorts and disease progression, in a manner similar to that used by other researchers in the field Footnote 14. The use of the two data sets through an iterative process improved the overall model and made it less dependent on the limitations of any one data set. We also cross-validated the annual HCV prevalence predicted by the model with the prevalence from independent data sources, including the Canadian Health Measures Survey 2007-2011 data Footnote 7 and the reported HCV infections among healthcare patients from the CIHI Discharge Abstract Database Footnote 29. While absolute measures of HCV prevalence differed between the above data sources (possibly due to the differences in methodology and in how outcomes and geographic representation were defined) there was general agreement in the distribution of predicted/estimated HCV prevalent cases by year of report and birth cohort as well as for temporal trends.

These estimates may be affected by both data and methodological limitations such as under-reporting of outcomes; combining anti-HCV and HCV-RNA test results into a single outcome measure; and using record-level data from six Canadian jurisdictions to make inferences about HCV prevalence for all of Canada. Other limitations are due to value judgements in grading and choosing outcome measures for specific populations; the largely English-language focus of the review; not adjusting the back-calculation model for the effect of HCV treatment; and the many assumptions used in the estimation process. The methods used to develop HCV prevalence estimates described in this paper make maximum use of available data, are based on independent data sources and, when used jointly and iteratively, may compensate for individual deficiencies. Nonetheless, we anticipate the prevalence estimates will change as new and improved data on HCV prevalence in Canadian populations becomes available.

Remis R. Modelling the incidence and prevalence of Hepatitis C infection and its sequelae in Canada, 2007. Final report. PHAC, 2009. http://www.phac-aspc.gc.ca/sti-its-surv-epi/model/pdf/model07-eng.pdf.

Brookmeyer R, Gail MH. A method for obtaining short-term projections and lower bounds on the size of the AIDS epidemic. J Am Stat Assoc. 1988; 83: 301-8.

Federally incarcerated youth 12-17 represent 4.9% of the total number of federal inmates. From the Canada page on prisonstudies.org. http://prisonstudies.org/country/canada, accessed March 11, 2014.