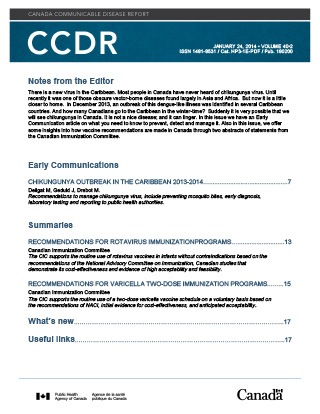 Notes from the Editor

There is a new virus in the Caribbean. Most people in Canada have never heard of chikungunya virus. Until recently it was one of those obscure vector-borne diseases found largely in Asia and Africa. But now it is a little closer to home. In December 2013, an outbreak of this dengue-like illness was identified in several Caribbean countries. And how many Canadians go to the Caribbean in the winter-time? Suddenly it is very possible that we will see chikungunya in Canada. It is not a nice disease; and it can linger. In this issue we have an Early Communication article on what you need to know to prevent, detect and manage it. Also in this issue, we offer some insights into how vaccine recommendations are made in Canada through two abstracts of statements from the Canadian Immunization Committee.

Summaries
Recommendations for rotavirus immunization programs
Canadian Immunization Committee
The CIC supports the routine use of rotavirus vaccines in infants without contraindications based on the recommendations of the National Advisory Committee on Immunization, Canadian studies that demonstrate its cost-effectiveness and evidence of high acceptability and feasibility.

Recommendations for varicella two-dose immunization programs
Canadian Immunization Committee
The CIC supports the routine use of a two-dose varicella vaccine schedule on a voluntary basis based on the recommendations of NACI, initial evidence for cost-effectiveness, and anticipated acceptability.

A 61 year old man developed anthrax likely due to inhalation of spore-contaminated soil after travelling through 4 states in the US. (pre-print)

The Consortium for Standardization of Influenza Seroepidemiology has developed study protocol templates to evaluate the seroprevalence of seasonal, pandemic and zoonotic influenza viruses in specific human populations and standardised the international serology laboratory response to a new emerging influenza virus.