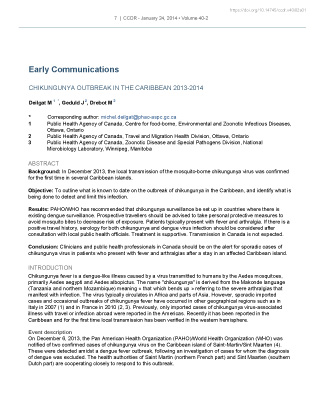 Chikungunya Outbreak in the Caribbean 2013-2014

Background: In December 2013, the local transmission of the mosquito-borne chikungunya virus was confirmed for the first time in several Caribbean islands.

Objective: To outline what is known to date on the outbreak of chikungunya in the Caribbean, and identify what is being done to detect and limit this infection.

Results: PAHO/WHO has recommended that chikungunya surveillance be set up in countries where there is existing dengue surveillance. Prospective travellers should be advised to take personal protective measures to avoid mosquito bites to decrease risk of exposure. Patients typically present with fever and arthralgia. If there is a positive travel history, serology for both chikungunya and dengue virus infection should be considered after consultation with local public health officials. Treatment is supportive. Transmission in Canada is not expected.

Conclusion: Clinicians and public health professionals in Canada should be on the alert for sporadic cases of chikungunya virus in patients who present with fever and arthralgias after a stay in an affected Caribbean island.

Chikungunya fever is a dengue-like illness caused by a virus transmitted to humans by the Aedes mosquitoes, primarily Aedes aegypti and Aedes albopictus. The name "chikungunya" is derived from the Makonde language (Tanzania and northern Mozambique) meaning « that which bends up » referring to the severe arthralgias that manifest with infection. The virus typically circulates in Africa and parts of Asia. However, sporadic imported cases and occasional outbreaks of chikungunya fever have occurred in other geographical regions such as in Italy in 2007 Footnote 1 and in France in 2010 Footnote 2 Footnote 3. Previously, only imported cases of chikungunya virus-associated illness with travel or infection abroad were reported in the Americas. Recently it has been reported in the Caribbean and for the first time local transmission has been verified in the western hemisphere.

On December 6, 2013, the Pan American Health Organization (PAHO)/World Health Organization (WHO) was notified of two confirmed cases of chikungunya virus on the Caribbean island of Saint-Martin/Sint Maarten Footnote 4. These cases were detected amidst a dengue fever outbreak, following an investigation of cases for whom the diagnosis of dengue had been excluded. The health authorities of Saint Martin (northern French part) and Sint Maarten (southern Dutch part) are cooperating closely to respond to this outbreak.

In consultation with PAHO, a "suspect " case of travel-related chikungunya disease has been defined as a patient with acute onset of fever >38.5ºC (101.3ºF) who exhibits severe arthralgias or arthritis not associated with other medical conditions and has visited epidemic or endemic areas within two weeks prior to the onset of symptoms Footnote 5.

As of January 17, 2014, there have been 480 confirmed human cases of chikungunya virus in the Caribbean reported to PAHO/WHO with many additional cases under investigation Footnote 6. Indigenous cases of chikungunya virus have been confirmed on the islands of Saint Martin/Sint Maarten, Martinique, British Virgin Islands, Guadeloupe and Saint Barthélemy. An additional case from French Guiana has been associated with travel to Martinique and one from Dominica with travel to St Martin. Results are pending on two suspected travel-related cases in the United States (1 to Saint Martin and 1 to St Lucia). To date, there have not been any human cases of chikungunya virus reported among Canadian travellers returning from the Caribbean. The recent outbreak in the Caribbean islands marks the first indigenous transmission of chikungunya in the Region of the Americas.

Working closely with PAHO, actions implemented by local authorities to date include:

In 2012, Canadians made over 2.5 million visits to Caribbean countries Footnote 7. Therefore, travel-related cases of chikunguya chikungunya virus returning from the Caribbean can be expected. There is a risk to travellers going the Caribbean islands and they should be advised to practice personal protective measures against mosquito bites.

The current risk in Canada of local transmission of chikunguya chikungunya virus is low as the mosquitoes that typically transmit it among humans are not found in Canada.

Travellers should be advised to contact their health care professional if they develop flu-like symptoms while they are travelling or within 12 days after their return to Canada.

It is important to obtain a travel history for anyone presenting with fever and arthralgia. Typically, after a 3 to 7 day incubation period (range 1-12) there is abrupt onset of fever and arthralgia with constitutional symptoms such as chills, headache, photophobia, conjunctival injection, anorexia, abdominal pain, and nausea. Migratory polyarthritis primarily involves the small joints of the hands, wrist, ankles, and feet with lesser involvement of larger joints. Rash may appear several days after disease onset and typically correlated with defervescence. The rash is most prominent on the trunk and limbs and may desquamate lasting for 1-7 days. Leucopenia and mild thrombocytopenia can be found. Neurological, cardiac, and hepatic complications are rare. (Table 2) Older patients may develop persistent stiffness, arthralgia, and joint effusions for several years, especially in HLA-B27 patients. Chronic inflammatory joint symptoms were observed in up to 50% of adult cases, and after two years in some outbreaks Footnote 4 Footnote 5. It is typically a self-limited illness and is rarely fatal.

Previous studies have shown that a combination of fever and polyarthralgia had the best sensitivity and specificity at 84% and 89%, respectively, and correlated with the correct classification 87% of individuals with serologically confirmed chikunguya virus infection.

The laboratory testing criteria for identifying cases include viral isolation, detection of viral RNA, and presence of viral specific IgM or IgG / neutralizing antibody. Viral isolation and RT-PCR can be used to detect virus or viral RNA in serum or blood samples collected within 7 days of symptom onset. IgM antibodies are detectable in in serum samples collected 5-7 days post onset.

Testing for chikungunya virus should be considered every time a suspect dengue cases is tested to rule out or identify co-existant disease.

There is no specific treatment and supportive care, such as fluids, analgesia and NSAIDs, with rest is indicated during the acute symptoms. Patients with severe joint pain can be treated with narcotics or short-term corticosterioids. Mortality is rare and recovery without sequalae is expected in most cases. Occasionally, arthralgia can persist for months to over a year Footnote 6 Footnote 7.

Chikungunya virus and dengue are not nationally notifiable diseases in Canada but detecting and reporting this disease are very useful in tracking its reach. It is recommended that cases diagnosed with chikungunya virus be reported to local public health authorities, who can report to provincial/territorial health authorities, who can in turn report nationally. The Public Health Agency of Canada can in turn report to PAHO/WHO.

Clinicians and public health professionals in Canada should be on the alert for sporadic cases of chikungunya virus in patients who present with fever and arthralgia after a stay in an affected Caribbean island.

No funding was involved

Pan American Health Organization. Cumulative number of reported cases of chikungunya fever in the Americans, by country of territory 2014 to 17 January 2014. Epidemiological week 03. 2014.