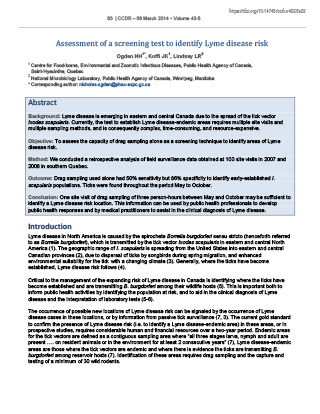 Assessment of a screening test to identify Lyme disease risk

Background: Lyme disease is emerging in eastern and central Canada due to the spread of the tick vector Ixodes scapularis. Currently, the test to establish Lyme disease-endemic areas requires multiple site visits and multiple sampling methods, and is consequently complex, time-consuming, and resource-expensive.

Objective: To assess the capacity of drag sampling alone as a screening technique to identify areas of Lyme disease risk.

Methods: We conducted a retrospective analysis of field surveillance data obtained at 100 site visits in 2007 and 2008 in southern Quebec.

Outcome: Drag sampling used alone had 50% sensitivity but 86% specificity to identify early-established I. scapularis populations. Ticks were found throughout the period May to October.

Conclusions: One site visit of drag sampling of three person-hours between May and October may be sufficient to identify a Lyme disease risk location. This information can be used by public health professionals to develop public health responses and by medical practitioners to assist in the clinical diagnosis of Lyme disease.

Lyme disease in North America is caused by the spirochete Borrelia burgdorferi sensu stricto (henceforth referred to as Borrelia burgdorferi), which is transmitted by the tick vector Ixodes scapularis in eastern and central North America Footnote 1. The geographic range of I. scapularis is spreading from the United States into eastern and central Canadian provinces Footnote 2, due to dispersal of ticks by songbirds during spring migration, and enhanced environmental suitability for the tick with a changing climate Footnote 3. Generally, where the ticks have become established, Lyme disease risk follows Footnote 4.

Critical to the management of the expanding risk of Lyme disease in Canada is identifying where the ticks have become established and are transmitting B. burgdorferi among their wildlife hosts Footnote 5. This is important both to inform public health activities by identifying the population at risk, and to aid in the clinical diagnosis of Lyme disease and the interpretation of laboratory tests Footnote 5 Footnote 6.

The occurrence of possible new locations of Lyme disease risk can be signaled by the occurrence of Lyme disease cases in these locations, or by information from passive tick surveillance Footnote 7 Footnote 3. The current gold standard to confirm the presence of Lyme disease risk (i.e. to identify a Lyme disease-endemic area) in these areas, or in prospective studies, requires considerable human and financial resources over a two-year period. Endemic areas for the tick vectors are defined as a contiguous sampling area where "all three stages larva, nymph and adult are present on resident animals or in the environment for at least 2 consecutive years" Footnote 7, Lyme disease-endemic areas are those where the tick vectors are endemic and where there is evidence the ticks are transmitting B. burgdorferi among reservoir hosts Footnote 7. Identification of these areas requires drag sampling and the capture and testing of a minimum of 30 wild rodents.

Drag sampling involves trailing a 1-m2 flannel through the habitat to collect unfed ticks that are host-seeking on the woodland floor. Rodents are captured in live traps and examined for ticks. Wild rodents are natural hosts of larval and nymphal ticks as well as being reservoir hosts for B. burgdorferi. Ticks and blood and tissue samples from captured rodents are tested for evidence of B. burgdorferi infection by polymerase chain reaction (PCR), serology, and/or culture. Although this method has a high specificity and sensitivity to detect infected ticks and B. burgdorferi, it is time consuming. It requires multiple site visits to place traps and then open them to sample rodents the following day. This process is usually repeated three times a year for two years. This is challenging both logistically and in terms of human and financial resource needs, is limited by the availability of trained field operatives and may limit the amount of field surveillance that can be conducted by provincial and municipal public health organizations.

In the United States, the mainstay of field surveillance is drag sampling alone, based on the observation that the numbers of infected ticks collected by drag sampling correlates with risk to humans Footnote 8. It is also known that different tick stages are active at different times of the year, and tick abundance overall can vary from one year to the next, particularly in emerging risk areas Footnote 10.

The objective of this study was to assess whether drag sampling alone may be sufficient as a screening technique to identify I. scapularis populations and Lyme disease risk in Canada and whether this may be affected by the time of year sampling occurs.

To assess drag sampling alone as a screening technique to identify Lyme disease risk, we retrospectively analyzed data from previous field studies carried out at 71 individual sites in southern Quebec in 2007 and 2008 Footnote 3 Footnote 9. Sites were selected to ensure the habitat was suitable for I. scapularis and to minimize intersite variations in habitat. Variations in presence and numbers of I. scapularis ticks were mostly determined by temperature conditions at the sites Footnote 3. Some of the 71 sites were visited up to four times over the period from 2007 to 2008, so there were data from 100 site visits. At each site visit, the presence of I. scapularis was determined by drag sampling the environment (with an effort of three person-hours per site visit), and by examination of captured rodents for feeding ticks. At each site visit, 15 mice were captured, giving 95% probability of detecting a tick-infested rodent if the true prevalence is 20%. This was lower than the 30 mice recommended by guidelines developed by Health Canada in 1991 (to give 95% probability of detecting an infested mouse if the true prevalence was 10%), as the objective in the 1991 guidelines was to confirm the absence of ticks Footnote 7. The species of all collected ticks was determined using standard tick identification keys Footnote 3. All identification of ticks and laboratory analyses for B. burgdorferi infection in samples collected from these sites were conducted at the Public Health Agency of Canada's National Microbiology Laboratory.

To explore whether the season or year of site visits had an impact on the ability of drag sampling to detect ticks, two logistic regression models were created in which site identification number was a random effect (as some sites were visited multiple times). In the first model, we explored whether there were seasonal variations in the capacity of examination of captured rodents to detect I. scapularis on a site. In this model, the outcome variable was presence of I. scapularis as determined by examination of captured rodents, and the explanatory variables were year of sampling and season of sampling (season 1 being May to June, season 2 being July to August, and season 3 being September to October). In the second model, we explored whether the season and year of sampling were associated with variations in the capacity of drag sampling to predict the presence of I. scapularis on rodents. Interactions amongst drag-sampling results and season were also explored. All analyses were conducted in Stata SE 11.0 (StataCorp, College Station, Tx) and the threshold for significance was P <0.05.

A total of one hundred site visits were conducted at 71 sites over a two-year period. At all the sites visited, the density of ticks and B. burgdorferi infection prevalence were low Footnote 3, which was consistent with early stage of establishment of the tick and B. burgdorferi transmission cycles Footnote 10 Footnote 11. Eleven of the sites at which I. scapularis were identified at visits in 2007 were revisited in 2008 at least once. At the 2008 site visits, two or more stages of I. scapularis were detected at all of the sites, supporting the idea that these sites did not just have adventitious ticks as they contained reproducing populations of I. scapularis Footnote 3.

The strength of this study is that our preliminary evidence suggests this simple field technique can offer a good indication of Lyme disease risk. This is consistent with American studies linking drag sampling results to human disease incidence Footnote 8. This is also consistent with what has occurred in Ontario and Quebec: as tick populations become more firmly established, tick density and tick infection prevalence will rise Footnote 4. Screening for Lyme disease risk by drag sampling alone is also relatively easy and cheap to operationalize and did not seem to be affected by seasonal variation.

A limitation of this study was using the positive rodent test as the comparator, versus the more comprehensive 1991 guidelines test for establishing a Lyme disease-endemic area. The rodent test was a good proxy but was not ideal, as evidenced by the two instances where drag sampling was positive but rodent test was negative. The assumption that these were adventitious ticks was not substantiated as ticks were found in rodents at those sites in subsequent years. Drag sampling also detects adult ticks active in spring and autumn, and these do not feed on rodents so would not be detected by rodent capture alone Footnote 10.

Another potential limitation of the study is that it did not assess the effectiveness of field training. Not all ticks, for example, are easily identifiable. Larvae active in late summer are smaller than spring-active nymphs and individually less likely to be found Footnote 10. Training of field staff to identify the very small immature ticks would be needed, but this training would be much easier to implement than training for capture, handling and/or anesthesia and examination of rodents.

Further study is warranted to explore the relationships between tick abundance and infection prevalence and incidence of human cases to more clearly be able to quantify the relationship between environmental measures of risk and disease risk. Also, replication of the study in different habitats and geographic locations (e.g. woodlands of British Columbia, Manitoba, and the Maritimes) would be prudent to explore and ensure the generalizability of the findings.

Drag sampling may be most useful in identifying the progression of areas at risk in provinces where Lyme disease risk has already been established. Once a Lyme disease-endemic area is confirmed, then the one-visit drag-sampling method could be employed to identify areas of risk over a wider geographic area. However, it may be prudent for public health practitioners in provinces (such as Alberta, Saskatchewan, and Prince Edward Island) and the territories where I. scapularis or I. pacificus do not presently occur, to use the 1991 guidelines methodology recommended to detect Lyme disease-endemic areas Footnote 7 before using this screening test to assess emerging tick populations.

We acknowledge all our co-authors on the previous studies Footnote 3 Footnote 9 that provided the data analyzed here.

The field work of this study was funded by the Public Health Agency of Canada and the Institut de santé publique du Québec.