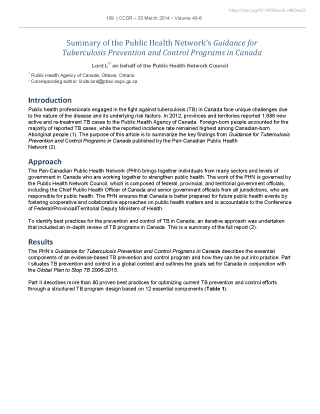 Lord L1* on behalf of the Public Health Network Council

Public health professionals engaged in the fight against tuberculosis (TB) in Canada face unique challenges due to the nature of the disease and its underlying risk factors. In 2012, provinces and territories reported 1,686 new active and re-treatment TB cases to the Public Health Agency of Canada. Foreign-born people accounted for the majority of reported TB cases, while the reported incidence rate remained highest among Canadian-born Aboriginal people Footnote 1. The purpose of this article is to summarize the key findings from Guidance for Tuberculosis Prevention and Control Programs in Canada published by the Pan-Canadian Public Health Network Footnote 2.

The Pan-Canadian Public Health Network (PHN) brings together individuals from many sectors and levels of government in Canada who are working together to strengthen public health. The work of the PHN is governed by the Public Health Network Council, which is composed of federal, provincial, and territorial government officials, including the Chief Public Health Officer of Canada and senior government officials from all jurisdictions, who are responsible for public health. The PHN ensures that Canada is better prepared for future public health events by fostering cooperative and collaborative approaches on public health matters and is accountable to the Conference of Federal/Provincial/Territorial Deputy Ministers of Health.

To identify best practices for the prevention and control of TB in Canada, an iterative approach was undertaken that included an in-depth review of TB programs in Canada. This is a summary of the full report Footnote 2.

These components are interconnected and rely on the support of highly trained personnel (Figure 1). Parts III and IV examine the partnerships and linkages in place to strengthen public health efforts in Canada and abroad.

Figure 1: Illustration of the interconnectedness among the 12 essential components of an effective TB prevention and control program 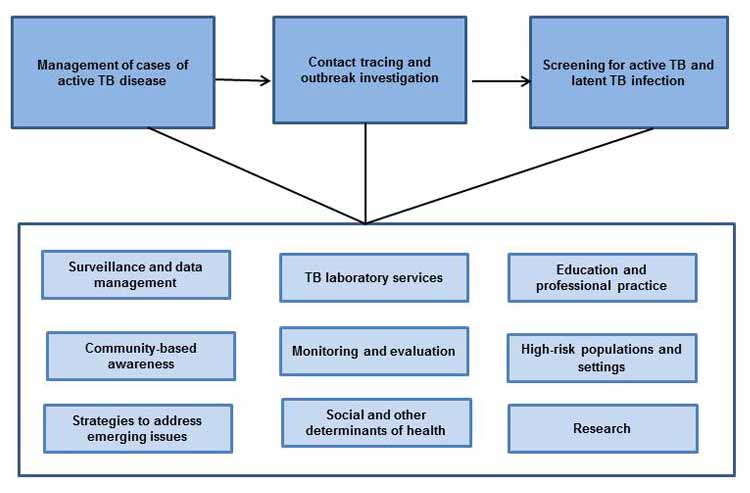 Addressing TB in a uniquely Canadian context requires a modern, evidence-based approach that recognizes both domestic and global disease trends. The intent of Guidance for Tuberculosis Prevention and Control Programs in Canada is to inform ongoing program delivery and development by providing decision-makers, healthcare providers, and program planners with proven best practices they can apply in their work.

The Public Health Network Council would like to thank the members of the Communicable and Infectious Disease Steering Committee, the former Canadian Tuberculosis Committee and the many individuals with the Public Health Agency of Canada and Health Canada who contributed to the development of the guidance document.