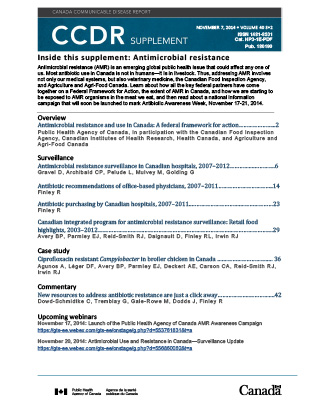 Inside this supplement: Antimicrobial resistance

Antimicrobial resistance (AMR) is an emerging global public health issue that could affect any one of us. Most antibiotic use in Canada is not in humans—it is in livestock. Thus, addressing AMR involves not only our medical systems, but also veterinary medicine, the Canadian Food Inspection Agency, and Agriculture and Agri-Food Canada. Learn about how all the key federal partners have come together on a Federal Framework for Action, the extent of AMR in Canada, and how we are starting to be exposed to AMR organisms in the meat we eat, and then read about a national information campaign that will soon be launched to mark Antibiotic Awareness Week, November 17-21, 2014.

Overview
Antimicrobial resistance and use in Canada: A federal framework for action
Public Health Agency of Canada, in participation with the Canadian Food Inspection Agency, Canadian Institutes of Health Research, Health Canada, and Agriculture and Agri-Food Canada

November 20, 2014: Antimicrobial Use and Resistance in Canada—Surveillance Update