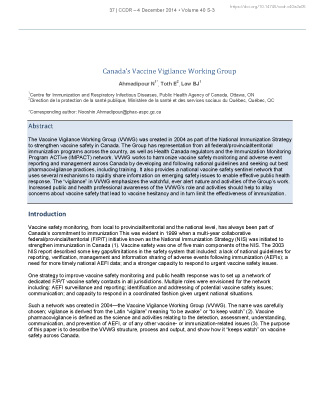 The Vaccine Vigilance Working Group (VVWG) was created in 2004 as part of the National Immunization Strategy to strengthen vaccine safety in Canada. The Group has representation from all federal/provincial/territorial immunization programs across the country, as well as Health Canada regulators and the Immunization Monitoring Program ACTive (IMPACT) network. VVWG works to harmonize vaccine safety monitoring and adverse event reporting and management across Canada by developing and following national guidelines and seeking out best pharmacovigilance practices, including training. It also provides a national vaccine safety sentinel network that uses several mechanisms to rapidly share information on emerging safety issues to enable effective public health response. The “vigilance” in VVWG emphasizes the watchful, ever alert nature and activities of the Group’s work. Increased public and health professional awareness of the VVWG’s role and activities should help to allay concerns about vaccine safety that lead to vaccine hesitancy and in turn limit the effectiveness of immunization.

Vaccine safety monitoring, from local to provincial/territorial and the national level, has always been part of Canada’s commitment to immunization This was evident in 1999 when a multi-year collaborative federal/provincial/territorial (F/P/T) initiative known as the National Immunization Strategy (NIS) was initiated to strengthen immunization in Canada Footnote 1. Vaccine safety was one of five main components of the NIS. The 2003 NIS report described some key gaps/limitations in the safety system that included: a lack of national guidelines for reporting, verification, management and information sharing of adverse events following immunization (AEFIs); a need for more timely national AEFI data; and a stronger capacity to respond to urgent vaccine safety issues.

One strategy to improve vaccine safety monitoring and public health response was to set up a network of dedicated F/P/T vaccine safety contacts in all jurisdictions. Multiple roles were envisioned for the network including: AEFI surveillance and reporting; identification and addressing of potential vaccine safety issues; communication; and capacity to respond in a coordinated fashion given urgent national situations.

Such a network was created in 2004—the Vaccine Vigilance Working Group (VVWG). The name was carefully chosen; vigilance is derived from the Latin “vigilare” meaning “to be awake” or “to keep watch” Footnote 2. Vaccine pharmacovigilance is defined as the science and activities relating to the detection, assessment, understanding, communication, and prevention of AEFI, or of any other vaccine- or immunization-related issues Footnote 3. The purpose of this paper is to describe the VVWG structure, process and output, and show how it “keeps watch” on vaccine safety across Canada.

The Working Group has two Co-Chairs, one federal and one provincial. Core members consist of one representative from each provincial and territorial jurisdiction, except Ontario which has two: one representing the Ministry of Health which oversees immunization, and one from Public Health Ontario which manages AEFI surveillance. Liaison members are non-voting representatives from the following departments/organizations: the Immunization Monitoring Program ACTive (IMPACT) network; two Health Canada vaccine regulators representing the Marketed Health Products Directorate (MHPD) and the Biologics and Genetic Therapies Directorate (BGTD); four from federal jurisdictions with immunization program responsibilities, including: Health Canada’s First Nations and Inuit Health Branch (FNIHB); the Department of National Defence (DND); the Royal Canadian Mounted Police (RCMP); and Correctional Services Canada (CSC). Liaison members bring additional knowledge and expertise to the Working Group, expressing the views of and communicating back to their organizations, as permitted by the VVWG.

VVWG reports to the Canadian Immunization Committee (CIC), which was also formed in response to the recommendations of the National Immunization Strategy and has a mandate to facilitate the achievement of the NIS recommendations. The CIC in turn reports up to higher committees that are part of the Public Health Network Council, which reports to the Conference of F/P/T Deputy Ministers of Health.

In response to the challenges identified in the 2003 NIS report, the VVWG has done a number of things, including the development of national standard procedures and guidelines, the development of a secure web-based AEFI alerting communication tool and enhanced surveillance during the 2009 H1N1 pandemic (Table 1).

For example, the enhanced surveillance during the 2009 H1N1 pandemic was done through weekly VVWG teleconferences that enabled rapid communication regarding any emerging vaccine safety concerns. Each F/P/T jurisdiction participated in the calls followed by weekly aggregate AEFI counts sent to the Public Health Agency of Canada (PHAC) that included serious AEFIs as well as AEFIs of special concern, such as anaphylaxis, febrile seizures and Guillain-Barré syndrome. This enabled PHAC to report to stakeholders, including the public, in close to real time on the safety of the pandemic vaccine during and after the mass campaign.

Lessons learned in 2009 have been applied to subsequent mass immunization campaigns. Since 2010, the VVWG has set up weekly calls at the beginning of each seasonal influenza campaign to share vaccine safety data and review any potential vaccine safety issues in a timely manner.

More information on the VVWG and its members are available in its guide to AEFI reporting Footnote 4.

Currently, VVWG is drafting an AEFI Signal Response Protocol, which describes the processes and required actions for timely management of any newly detected or emerging vaccine safety signal. This protocol will detail procedures from signal detection, validation, analysis and prioritization, to signal assessment, necessary communications and actions at each level of government, as well as final recommendations. At each step, roles and responsibilities of F/P/T health jurisdictions, the Public Health Agency of Canada, and the vaccine regulators at Health Canada will be clearly described, including an ongoing communication plan from start to finish when a recommendation is made or when the signal is considered a false signal. Protocol annexes will include general and AEFI specific templates and checklists to facilitate timely data collection.

Since its origin in 2004, VVWG has provided an essential F/P/T forum of front-line workers in vaccination and vaccine pharmacovigilance and developed the capacity for rapid communication of vaccine safety information. However, challenges remain. A key NIS priority was to have dedicated trained personnel focused on vaccine safety at local, P/T and federal levels. In an era of reduced spending and unexpected public health crises it is sometimes difficult to meet this priority; the impact of gaps was clearly demonstrated during the 2009 pandemic. Following that experience, pandemic pharmacovigilance planning shifted towards efforts to ensure key NIS priorities were operationalized for everyday practice. Elsewhere in this supplement, pilot projects started by VVWG to address remaining gaps are described Footnote 5,Footnote 6.

Since VVWG’s inception there have been many potential but few real vaccine safety concerns. Much of VVWG’s work is invisible to the public, immunization providers and other health care professionals. However, it is important that they be aware that vaccine vigilance is on ongoing daily activity coordinated across Canada. As such, the absence of significant safety concerns is not because someone isn’t watching and ready to act should something emerge.

Thanks are owed to: Wikke Walop, who, while working in Vaccine Safety at PHAC, initiated the forerunner of what grew into VVWG; to all VVWG members, past and present, for their contributions to the working group with special thanks to Tania Diener who served as the first provincial Co-Chair; to the many PHAC staff who have supported the group through the years; and to members of the Canadian Immunization Committee who have provided key input and feedback, and contributed their considerable expertise to VVWG.

The Vaccine Vigilance Working Group is funded by the Public Health Agency of Canada with in-kind support from the Working Group members in terms of their time volunteered and, on occasion, travel costs to attend meetings.