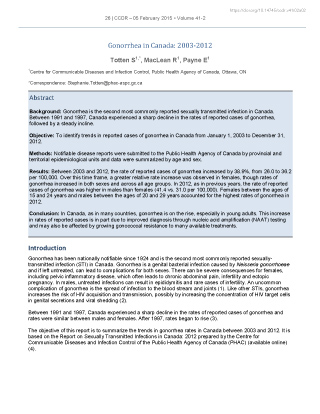 Background: Gonorrhea is the second most commonly reported sexually transmitted infection in Canada. Between 1991 and 1997, Canada experienced a sharp decline in the rates of reported cases of gonorrhea, followed by a steady incline.

Objective: To identify trends in reported cases of gonorrhea in Canada from January 1, 2003 to December 31, 2012.

Methods: Notifiable disease reports were submitted to the Public Health Agency of Canada by provincial and territorial epidemiological units and data were summarized by age and sex.

Conclusion: In Canada, as in many countries, gonorrhea is on the rise, especially in young adults. This increase in rates of reported cases is in part due to improved diagnosis through nucleic acid amplification (NAAT) testing and may also be affected by growing gonococcal resistance to many available treatments.

Gonorrhea has been nationally notifiable since 1924 and is the second most commonly reported sexually-transmitted infection (STI) in Canada. Gonorrhea is a genital bacterial infection caused by Neisseria gonorrhoeae and if left untreated, can lead to complications for both sexes. There can be severe consequences for females, including pelvic inflammatory disease, which often leads to chronic abdominal pain, infertility and ectopic pregnancy. In males, untreated infections can result in epididymitis and rare cases of infertility. An uncommon complication of gonorrhea is the spread of infection to the blood stream and jointsFootnote 1. Like other STIs, gonorrhea increases the risk of HIV acquisition and transmission, possibly by increasing the concentration of HIV target cells in genital secretions and viral sheddingFootnote 2.

Between 1991 and 1997, Canada experienced a sharp decline in the rates of reported cases of gonorrhea and rates were similar between males and females. After 1997, rates began to riseFootnote 3.

The objective of this report is to summarize the trends in gonorrhea rates in Canada between 2003 and 2012. It is based on the Report on Sexually Transmitted Infections in Canada: 2012 prepared by the Centre for Communicable Diseases and Infection Control of the Public Health Agency of Canada (PHAC) (available online)Footnote 4.

Data on laboratory-confirmed gonorrhea cases were reported to the Canadian Notifiable Disease Surveillance System (CNDSS) by provincial and territorial health authorities according to the Agency's Case Definitions for Communicable Diseases under National SurveillanceFootnote 5 (see box below). Data are submitted in a variety of formats (e.g., line-listed electronic, paper-based case reports, or aggregate data) and are verified and loaded into the CNDSS database by Agency personnel.

Laboratory-evidence of infection in genitourinary or extra-genital specimens:

Gonorrhea data extracted from the CNDSS were analyzed by Centre for Communicable Diseases and Infection Control (CCDIC) staff. Rates were calculated by age group and sex using population estimates obtained from the Statistics Canada Demography Division. Rate change calculations were made on unrounded figures for greater precision. Surveillance is considered to be within the mandate of Federal/Provincial/Territorial (F/P/T) programs and does not constitute human research; therefore, no research ethics board approval was sought.

Between 2003 and 2012, most provinces and territories experienced a relative increase in the rate of the reported cases of gonorrhea (data not shown).

Recent trends in the rates of reported cases of gonorrhea in Canada have shown overall increases, despite some year-to-year variation. The increases in rates since the late 1990s may be at least partly explained more sensitive testing methods and improved case findingFootnote 6.

Antimicrobial resistance may also play a significant role in the increase in reported rates of gonorrhea, as the proportion of isolates resistant to a number of antibiotics has increased over time,Footnote 7 which may lead to treatment failure and a longer duration of infectiousness in affected patients. Emerging antimicrobial resistance in gonorrhea has led to changes in treatment recommendations across Canada and elsewhereFootnote 8Footnote 9Footnote 10Footnote 11.

In conclusion, over a 10-year period, gonorrhea rates have increased almost 40% and these increases are particularly pronounced among young adults. While the reasons for these increases are likely multifactorial, it is possible that increasing gonococcal resistance to many available treatments has contributed to observed trends and should continue to be monitored.

Ontario Agency for Health Protection and Promotion (Public Health Ontario). Guidelines for testing and treatment of gonorrhea in Ontario. 2013.