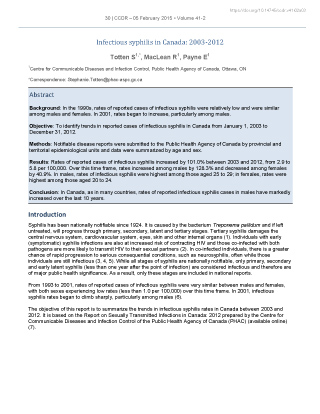 Background: In the 1990s, rates of reported cases of infectious syphilis were relatively low and were similar among males and females. In 2001, rates began to increase, particularly among males.

Objective: To identify trends in reported cases of infectious syphilis in Canada from January 1, 2003 to December 31, 2012.

Methods: Notifiable disease reports were submitted to the Public Health Agency of Canada by provincial and territorial epidemiological units and data were summarized by age and sex.

Conclusion: In Canada, as in many countries, rates of reported infectious syphilis cases in males have markedly increased over the last 10 years.

Syphilis has been nationally notifiable since 1924. It is caused by the bacterium Treponema pallidum and if left untreated, will progress through primary, secondary, latent and tertiary stages. Tertiary syphilis damages the central nervous system, cardiovascular system, eyes, skin and other internal organsFootnote 1. Individuals with early (symptomatic) syphilis infections are also at increased risk of contracting HIV and those co-infected with both pathogens are more likely to transmit HIV to their sexual partnersFootnote 2. In co-infected individuals, there is a greater chance of rapid progression to serious consequential conditions, such as neurosyphilis, often while those individuals are still infectiousFootnote 3Footnote 4Footnote 5. While all stages of syphilis are nationally notifiable, only primary, secondary and early latent syphilis (less than one year after the point of infection) are considered infectious and therefore are of major public health significance. As a result, only these stages are included in national reports.

From 1993 to 2001, rates of reported cases of infectious syphilis were very similar between males and females, with both sexes experiencing low rates (less than 1.0 per 100,000) over this time frame. In 2001, infectious syphilis rates began to climb sharply, particularly among malesFootnote 6.

The objective of this report is to summarize the trends in infectious syphilis rates in Canada between 2003 and 2012. It is based on the Report on Sexually Transmitted Infections in Canada: 2012 prepared by the Centre for Communicable Diseases and Infection Control of the Public Health Agency of Canada (PHAC) (available online)Footnote 7.

Data on laboratory-confirmed gonorrhea cases were reported to the Canadian Notifiable Disease Surveillance System (CNDSS) by provincial and territorial health authorities according to the Agency's Case Definitions for Communicable Diseases under National SurveillanceFootnote 8 (see box below). Data are submitted in a variety of formats (e.g., line-listed electronic, paper-based case reports, or aggregate data) and are verified and loaded into the CNDSS database by Agency personnel.

Identification of T. pallidum by dark-field microscopy, fluorescent antibody, nucleic acid testing or equivalent examination of material from a chancre or a regional lymph node,

Presence of one or more typical lesions (chancres) and reactive treponemal serology, regardless of non-treponemal test reactivity, in individuals with no previous history of syphilis,

Presence of one or more typical lesions (chancres) and a fourfold or greater increase in the titre over the last known non-treponemal test in individuals with a past history of syphilis treatment.

An asymptomatic patient with reactive serology (treponemal and/or non-treponemal) who, within the previous 12 months, had one of the following: non-reactive serolog, symptoms suggestive of primary or secondary syphilis, exposure to a sexual partner with primary, secondary or early latent syphilis.

For the purpose of this summary, congenital syphilis and (non-infectious) late latent syphilis were not included.

Infectious syphilis data extracted from the CNDSS were analyzed by Centre for Communicable Diseases and Infection Control (CCDIC) staff. Rates were calculated by age group and sex using population estimates obtained from the Statistics Canada Demography Division. Rate change calculations were made on unrounded figures for greater precision.

Surveillance is considered to be within the mandate of federal/provincial/territorial (F/P/T) programs and does not constitute human research; therefore, no research ethics board approval was sought.

Between 2003 and 2012, outbreaks of infectious syphilis were reported across most jurisdictions in Canada.

After a near-zero incidence of infectious syphilis, the number of reported cases began to rise in 2001 and continues to do so, especially among males. There is a significant difference in rates between males and females. Rates have more than doubled in males in the last 10 years, whereas they have decreased by a little over 40% in females. This resurgence appears to be primarily due to transmission among men who have sex with men (MSM). Increasing sexually transmitted infection (STI) rates among MSM have also been observed in the United States and Europe. The causes for these increases are complex and include demographic shifts as well as changing sexual attitudes and social contexts related to risky sexual practicesFootnote 9.

There are several factors that must be taken into account when considering these data. For example, the number of cases of infectious syphilis in Canada is low relative to other STIs. As a result, population rates are variable and unstable and therefore changes over time should be interpreted with caution. That being said, the number of reported cases likely underestimates the true burden of infection; many people who are infected with syphilis do not have symptoms and therefore may not be tested by a health care practitioner.

Internationally, overall rates of infectious syphilis were lowest in the United States (5.0 per 100,000)Footnote 10 although this estimate does not include early latent cases. Among countries that included early latent syphilis cases, Australia had the highest rate (6.7 per 100,000)Footnote 11 and in England, the rate was 5.6 per 100,000Footnote 12 compared to Canada's rate of 5.8 per 100,000. Variations in annual rates of infectious syphilis across countries should be interpreted with caution as a result of differing reporting practices.