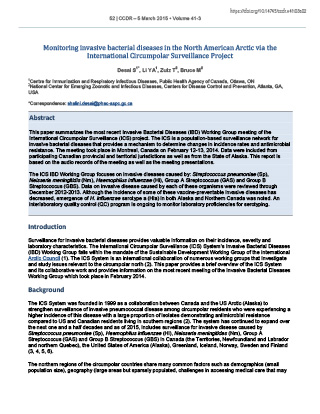 This paper summarizes the most recent Invasive Bacterial Diseases (IBD) Working Group meeting of the International Circumpolar Surveillance (ICS) project. The ICS is a population-based surveillance network for invasive bacterial diseases that provides a mechanism to determine changes in incidence rates and antimicrobial resistance. The meeting took place in Montreal, Canada on February 12-13, 2014. Data were included from participating Canadian provincial and territorial jurisdictions as well as from the State of Alaska. This report is based on the audio records of the meeting as well as the meeting presentations.

The ICS IBD Working Group focuses on invasive diseases caused by: Streptococcus pneumoniae (Sp), Neisseria meningitidis (Nm), Haemophilus influenzae (Hi), Group A Streptococcus (GAS) and Group B Streptococcus (GBS). Data on invasive disease caused by each of these organisms were reviewed through December 2012-2013. Although the incidence of some of these vaccine-preventable invasive diseases has decreased, emergence of H. influenzae serotype a (Hia) in both Alaska and Northern Canada was noted. An interlaboratory quality control (QC) program is ongoing to monitor laboratory proficiencies for serotyping.

Surveillance for invasive bacterial diseases provides valuable information on their incidence, severity and laboratory characteristics. The International Circumpolar Surveillance (ICS) System's Invasive Bacterial Diseases (IBD) Working Group falls within the mandate of the Sustainable Development Working Group of the international Arctic CouncilFootnote 1. The ICS System is an international collaboration of numerous working groups that investigate and study issues relevant to the circumpolar northFootnote 2. This paper provides a brief overview of the ICS System and its collaborative work and provides information on the most recent meeting of the Invasive Bacterial Diseases Working Group which took place in February 2014.

The ICS System was founded in 1999 as a collaboration between Canada and the US Arctic (Alaska) to strengthen surveillance of invasive pneumococcal disease among circumpolar residents who were experiencing a higher incidence of this disease with a large proportion of isolates demonstrating antimicrobial resistance compared to US and Canadian residents living in southern regionsFootnote 2. The system has continued to expand over the next one and a half decades and as of 2015, includes surveillance for invasive disease caused by Streptococcus pneumoniae (Sp), Haemophilus influenzae (Hi), Neisseria meningitides (Nm), Group A Streptococcus (GAS) and Group B Streptococcus (GBS) in Canada (the Territories, Newfoundland and Labrador and northern Quebec), the United States of America (Alaska), Greenland, Iceland, Norway, Sweden and FinlandFootnote 3Footnote 4Footnote 5Footnote 6.

The northern regions of the circumpolar countries share many common factors such as demographics (small population size), geography (large areas but sparsely populated, challenges in accessing medical care that may necessitate transfer of patients to more urban locations), climate (extreme weather) and social issues (isolation, cultural differences). All of these factors make them more similar to one another than to inhabitants in the southern regions of their own countries.  Of the eight countries in the circumpolar north, Russia does not participate in IBD surveillance but does take part in other ICS initiatives such as surveillance for tuberculosisFootnote 7.

The ICS network is a unique collaboration within the circumpolar north which combines population-based surveillance with epidemiological and laboratory linkages. Cases based on standard case definitions are identified by public health in each jurisdiction once laboratory confirmation is available and epidemiological data such as age, gender, clinical illness and risk factors have been collected in collaboration with local providers. The system is population-based in each participating country and provides epidemiological information on individual cases as well as laboratory data. These data are nominally linked within a jurisdiction and then de-identified to become a part of the overall surveillance system. Data are owned by each jurisdiction and compiled at the CDC Arctic Investigation Program in Alaska. These two factors (population based surveillance with epidemiological and laboratory linkages), make it a unique collaboration within the circumpolar north. The group meets annually either by WebEx or face-to-face in order to discuss current epidemiologic trends and to provide a forum to discuss invasive bacterial disease issues faced in the circumpolar north.

The 2014 meeting of the ICS IBD Working Group

The February 2014 ICS IBD Working Group meeting took place in Montreal, Canada. Participants represented Canada and US. Members from other countries were unable to attend.

The goal of the annual meeting is to review ICS IBD data to better understand the epidemiology of the five invasive bacterial diseases under surveillance. The February 2014 meeting focused on data from 1999 to 2012/2013. Data from the five regions in Canada (Nunavut, Northwest Territories, Yukon, Northern Quebec, Northern Labrador) participating in the collaboration were presented as well as data from the State of Alaska.

Canadian ICS data from 1999 to 2012 were reviewed by organism, serotype, year, age, region, ethnicity and clinical manifestation. Compared with Canadian national rates, the average incidence rates of invasive diseases caused by Sp, Hi, Nm, GAS were much higher in the Canadian ICS regions. Incidence rates of GBS were not compared due to differences in case definition; ICS reports GBS in all ages where national data includes only the neonatal age group. In the ICS regions, Aboriginal residents had higher incidence rates of invasive pneumococcal disease, Hi and invasive GAS (iGAS) than non-Aboriginals. For invasive pneumococcal disease and invasive meningococcal disease (IMD), incidence rates were highest among children under two years of age. Regional differences were noted in the overall incidence of invasive pneumococcal disease and Hi. Invasive GAS was the only disease that showed an increasing trend over the surveillance period; with the most affected groups being children less than two years of age and those over 65 years of age. The case fatality ratio was highest for IMD and lowest for GBS.

Alaskan data from 2000 to 2013 were reviewed with a focus on the data from 2011 to 2013. Data were stratified by organism, year, age, ethnicity and serotype. While IMD decreased over the surveillance period, invasive GAS and GBS showed an increasing trend Alaska Natives had much higher incidence rates of all targeted diseases compared with non-Alaska Natives. In reviewing cases of H. influenzae, Hia accounted for the majority of cases among children less than five years old whereas Hi non-typeable accounted for most cases among individuals five years and older. GBS is notifiable in all ages in Alaska.

The ICS is a unique and successful international collaboration providing population-based surveillance that includes both laboratory and epidemiological data on disease targets. The network is able to provide valuable information on existing and emerging invasive bacterial diseases as disease patterns change. Based on the most recent Invasive Bacterial Disease Working Group meeting, invasive Hia is seen as an emerging pathogen in the North American Arctic. Further work is planned to characterize the virulence and clinical severity of disease of this organism.

The findings and conclusions in this article are those of the authors and do not necessarily represent the official positions of the Centers for Disease Control and Prevention and the Public Health Agency of Canada.

Parkinson A, Bruce MG, et al. International circumpolar surveillance: A network for the surveillance of infectious diseases in the Arctic. EID. 2008 Jan;14(1):18-24.