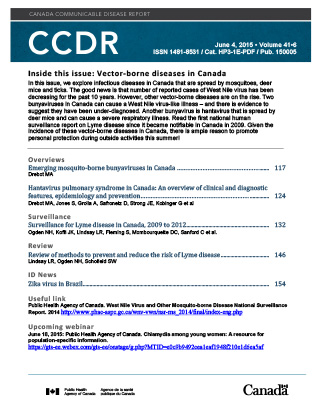 Inside this issue: Vector‑borne diseases in Canada

In this issue, we explore infectious diseases in Canada that are spread by mosquitoes, deer mice and ticks. The good news is that number of reported cases of West Nile virus has been decreasing now for the past 10 years. However, other vector‑borne diseases are on the rise. Two bunyaviruses in Canada can cause a West Nile virus-like illness — and there is evidence to suggest they have been under-diagnosed. Another bunyavirus is hantavirus that is spread by deer mice and can cause a severe respiratory illness. Read the first national human surveillance report on Lyme disease since it became notifiable in 2009. Given the rising incidence of these vector‑borne diseases in Canada, there is ample reason to promote personal protection during outside activities this summer!