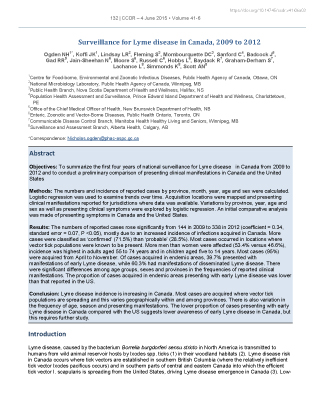 Objectives: To summarize the first four years of national surveillance for Lyme disease in Canada from 2009 to 2012 and to conduct a preliminary comparison of presenting clinical manifestations in Canada and the United States.

Methods: The numbers and incidence of reported cases by province, month, year, age and sex were calculated. Logistic regression was used to examine trends over time. Acquisition locations were mapped and presenting clinical manifestations reported for jurisdictions where data was available. Variations by province, year, age and sex as well as presenting clinical symptoms were explored by logistic regression. An initial comparative analysis was made of presenting symptoms in Canada and the United States.

Results: The numbers of reported cases rose significantly from 144 in 2009 to 338 in 2012 (coefficient = 0.34, standard error = 0.07, P <0.05), mostly due to an increased incidence of infections acquired in Canada. More cases were classified as 'confirmed' (71.5%) than 'probable' (28.5%). Most cases occurred in locations where vector tick populations were known to be present. More men than women were affected (53.4% versus 46.6%), incidence was highest in adults aged 55 to 74 years and in children aged five to 14 years. Most cases (95%) were acquired from April to November. Of cases acquired in endemic areas, 39.7% presented with manifestations of early Lyme disease, while 60.3% had manifestations of disseminated Lyme disease. There were significant differences among age groups, sexes and provinces in the frequencies of reported clinical manifestations. The proportion of cases acquired in endemic areas presenting with early Lyme disease was lower than that reported in the US.

Lyme disease, caused by the bacterium Borrelia burgdorferi sensu stricto in North America is transmitted to humans from wild animal reservoir hosts by Ixodes spp. ticksFootnote 1 in their woodland habitatsFootnote 2. Lyme disease risk in Canada occurs where tick vectors are established in southern British Columbia (where the relatively inefficient tick vector Ixodes pacificus occurs) and in southern parts of central and eastern Canada into which the efficient tick vector I. scapularis is spreading from the United States, driving Lyme disease emergence in CanadaFootnote 3. Low-level Lyme disease risk occurs over a wider geographic area due to ticks dispersed from tick populations by migratory birdsFootnote 4Footnote 5.

In light of the documented northern migration of ticks into Canada, Lyme disease became nationally notifiable in Canada in 2009 and basic information on human cases is submitted by all provinces and territories to the National Notifiable Disease Surveillance System (NNDSS) coordinated by the Public Health Agency of Canada (PHAC). A Lyme Disease Enhanced Surveillance (LDES) system was initiated by PHAC in 2010 with provincial public health organizations to obtain more detailed data on Lyme disease cases. Together, these surveillance systems aim to identify changing trends in Lyme disease incidence, the Canadian population at risk and the types of clinical disease in Canada to inform clinician-based Lyme disease diagnosis and reporting.

NNDS data on annual numbers of cases reported to all provincial and territorial public health organizations by clinicians or via provincial laboratories were available for 2009 to 2012. Basic information reported included sex, age and episode date. The cases were classified as 'confirmed' or 'probable' by the provincial public health organizations submitting the data, except for British Columbia, Québec and New Brunswick who reported all cases without classifying them and did not report cases with erythema migrans rashes without laboratory support for the diagnosis.

Clinical evidence of illness with laboratory confirmation by:

P1 = Clinical evidence of illness with a positive serologic test result using the two-tier (ELISA and Western Blot) test, without a history of residence in, or visit to, a Lyme disease endemic area*

P2 = Clinician-observed erythema migrans without laboratory evidence but with history of residence in, or visit to, a Lyme disease endemic areaFootnote 1.

In 2010, the LDES was implemented in partnership with the provinces of Manitoba, Ontario, New Brunswick and Nova Scotia. In 2012, Alberta, Saskatchewan and Prince Edward Island joined. Data transferred in a standard form in the LDES included details of possible location of acquisition of infection within or outside Canada, details of clinical manifestations and methods of laboratory diagnosis. There were variations among provinces participating in the LDES in the data provided (Appendix 1).

The data from both the LDES and NNDSS were summarized and, where possible, compared against similar data on Lyme disease case surveillance from the USFootnote 10) where similar data have been collected for over 20 years. Annual incidence in Canada, as well as province-, sex- and age group-specific incidence rates was calculated per 100,000 population. The denominators were census population estimates for July 1st for each year from 2009 to 2012Footnote 11. The proportion of cases reported by month and by case classification for each year was also calculated. Trends in the numbers of cases reported nationally for the period 2009 to 2012 ('confirmed' and 'probable' cases combined) were explored by logistic regression using weighted least squares estimation in Stata SE 11.0 for Windows (College Station, Tx), with year as the explanatory variable accounting for recent Canadian population estimatesFootnote 12. Analysis was conducted with case numbers and data reported at the time but these may change slightly due to retrospective identification of cases.

Analysis of numbers of endemic versus travel-related cases, location of acquisition and clinical features were performed on cases reported via the LDES by Manitoba, Ontario, New Brunswick and Nova Scotia. The likely locations of exposure of cases in Canada were mapped using ArcGIS Version 10.2 (ESRI) with point locations being the centroid of Forward Sortation Areas (Table 1) or endemic areas depending on reported location of acquisition. Known endemic areas and risk areasFootnote 3 were also mapped for visual comparison.

Variations among provinces, years, age groups and sex in the proportions reporting different clinical manifestations of disseminated Lyme disease were explored in logistic regression models in Stata SE 11.0. The outcome variables were presence/absence of erythema migrans, neurological manifestations, cardiac manifestations and arthritis/joint swelling in separate models. Explanatory variables of age, year, province and sex were first explored in bivariable analyses and those showing associations with the outcome at a level of significance of P <0.1 were included in multivariable models. Polynomial relationships of age with frequency of manifestations (using age and age squared as explanatory variables) were explored as suggested by visual inspection of Lowess smoothed graphs of these relationships. The most parsimonious multivariable models were sought by backward elimination of variables. The level of significance for the multivariable model was P <0.05.

Cases were reported from all provinces with most infections acquired in Canada occurring in British Columbia, Manitoba, Ontario, Québec, New Brunswick and Nova Scotia. All cases reported from Alberta and Newfoundland and Labrador were reported as acquired during travel outside Canada.

The majority of cases were reported as 'confirmed' (Table 1). Of the cases without a reported history of travel outside Canada, 387 included data on clinical symptoms and likely location of infection. For these cases, (reported by Manitoba, Ontario, New Brunswick and Nova Scotia), the numbers of P1 and P2 'probable' cases could be estimated. For these provinces, most probable cases were of the P1 category (Table 1).

Incidence variation with age and sex

Of 387 cases for which the type of episode date was recorded, the episode date was date of onset of illness for 328 (84.7%), date of specimen collection for diagnosis for 42 (10.8%), date of clinical or laboratory diagnosis for 13 (3.3%) and date of reporting for 3 (0.8%). Lyme disease cases had episode dates in all months of the year, but most (544/891, 61.1%) occurred from June to August (Figure 2). Cases in British Columbia tended to occur earlier and later in the year than in other provinces, while a greater proportion of cases occurred in October in Manitoba compared to other provinces (Figure 2).

The frequency of reported erythema migrans was highest for children and adults >50 years compared to other age groups, although after adjusting for year, the frequency of reporting of erythema migrans increased linearly with age (Table 3, Figure 6). The frequency of neurological manifestations and cardiac symptom reports varied significantly among age groups. Neurological manifestations were most frequently reported for 20 to 59 year-olds and relatively rarely reported for younger children and adults over 60, while cardiac symptoms were only seen in cases aged 20 to 69, particularly in cases aged 30 to 49 (Figure 6). The proportion of cases reporting neurological symptoms was also significantly higher in Ontario than in Nova Scotia and New Brunswick combined and was lower in women than men (Table 3). There were no significant differences among ages, sexes, provinces and years in the proportion of cases that reported arthritis (data not shown).

The incidence of reported cases among adults was highest in those over 54 years of age, in men and in children under 15 years old. This pattern is consistent with US surveillanceFootnote 10. These age groups and men may be particularly at risk of acquiring Lyme disease. However, children and older adults reported early Lyme disease manifestations more frequently and manifestations of disseminated Lyme disease less frequently, so high incidence in these groups may reflect greater awareness and earlier presentation for diagnosis compared to younger adults.

The seasonality of cases in Canada was similar to that observed in the USFootnote 10 and was consistent with tick-borne transmission. I. scapularis and I. pacificus are active from April to November and human outdoor recreational activities in woodlands are also most likely to occur at this time. Nymphal ticks transmit most cases of Lyme diseaseFootnote 17 but cases were acquired in early spring and autumn when adult ticks are most active. Consistent with longer season activity of I. pacificus compared to I. scapularisFootnote 18 more cases occurred earlier and later in the year in British Columbia where I. pacificus is the vector. Delays between infection and onset or diagnosis of disseminated Lyme disease could explain reporting of some cases in winterFootnote 9 although some early Lyme disease cases had a reported date of onset in winter. Why more Lyme disease cases were reported in autumn in Manitoba compared to other provinces in unclear, as ticks would also be active in other provinces at this time.

Neurological and cardiac manifestations were more likely to be reported for younger adults whereas there was no evidence of age-associated variations in the frequency of reporting arthritis. Neurological manifestations were less likely to be reported for males than females. The reasons for these observations are not clear and require further exploration. Reporting of neurological symptoms was more common in Ontario than the Maritimes possibly due to different methods of reporting symptoms among provinces or due to geographic variation in B. burgdorferi strainsFootnote 20.

The observations and results of this study represent a first view of Lyme disease surveillance data in Canada and it is too early to make firm conclusions regarding these preliminary trends. It is possible that data on location of acquisition and manifestation of infection in Canada is affected by issues of recall and other inaccuracies. The findings here require further study to be corroborated and to assess causality.

These data suggest that Lyme disease is emerging in Canada, with most cases occurring in seasons when and locations where Lyme disease risk in the environment is known to occur. Incidence was higher in men, in adults over 54 years old and children under 15 years old. The proportion of cases reported in early Lyme disease was lower than expected suggesting suboptimal awareness of Lyme disease during the surveillance period. Variations among provinces and age groups in the proportions of cases reporting erythema migrans and neurological and cardiac manifestations of disseminated Lyme disease were found, although are at present unexplained.

The authors thank Yann Pelcat of PHAC for preparing Figure 3.

Appendix 1: Data collected in national surveillance for Lyme disease in Canada during the period 2009 to 2012