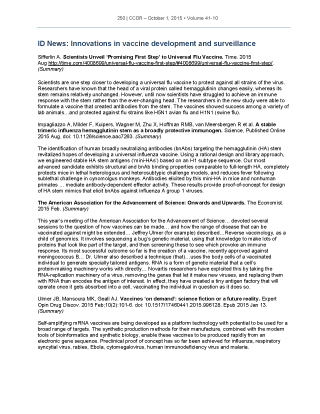 Innovations in vaccine development and surveillance

Scientists are one step closer to developing a universal flu vaccine to protect against all strains of the virus. Researchers have known that the head of a viral protein called hemagglutinin changes easily, whereas its stem remains relatively unchanged. However, until now scientists have struggled to achieve an immune response with the stem rather than the ever-changing head. The researchers in the new study were able to formulate a vaccine that created antibodies from the stem. The vaccines showed success among a variety of lab animals...and protected against flu strains like H5N1 avian flu and H1N1 (swine flu).

The American Association for the Advancement of Science: Onwards and Upwards. The Economist. 2015 Feb. (Summary)

This year's meeting of the American Association for the Advancement of Science... devoted several sessions to the question of how vaccines can be made... and how the range of disease that can be vaccinated against might be extended... Jeffrey Ulmer (for example) described...Reverse vaccinology, as a child of genomics. It involves sequencing a bug's genetic material, using that knowledge to make lots of proteins that look like part of the target, and then screening these to see which provoke an immune response. Its most successful outcome so far is the creation of a vaccine, recently approved against meningococcus B... Dr. Ulmer also described a technique (that)...uses the body cells of a vaccinated individual to generate specially tailored antigens. RNA is a form of genetic material that a cell's protein-making machinery works with directly... Novartis researchers have exploited this by taking the RNA-replication machinery of a virus, removing the genes that let it make new viruses, and replacing them with RNA than encodes the antigen of interest. In effect, they have created a tiny antigen factory that will operate once it gets absorbed into a cell, vaccinating the individual in question as it does so.

Self-amplifying mRNA vaccines are being developed as a platform technology with potential to be used for a broad range of targets. The synthetic production methods for their manufacture, combined with the modern tools of bioinformatics and synthetic biology, enable these vaccines to be produced rapidly from an electronic gene sequence. Preclinical proof of concept has so far been achieved for influenza, respiratory syncytial virus, rabies, Ebola, cytomegalovirus, human immunodeficiency virus and malaria.

In 2011 and 2012, a nationwide Canadian vaccine safety surveillance network rapidly collected safety data from healthcare workers (HCW) during the first weeks of the annual influenza vaccination campaign... In 2012, these data were used to investigate a possible safety concern regarding a particular vaccine. An online questionnaire was provided to participating HCW two weeks before the annual influenza vaccination campaign for controls, and eight days after influenza vaccination for vaccinees. Control and vaccinees were requested to report health events occurring in the seven days prior to receiving the questionnaire. Control data were used to calculate background rates...More than 22,000 vaccinated HCW were enrolled and surveyed over two seasons and > 90% reported no severe event following vaccination. Validated severe event rates were similar in vaccinated HCW and unvaccinated HCW (2.2% vs 2.3%; p < 0.70)...Prior to the safety concern, the implicated vaccine was in use at one centre. Reassuring safety data were provided to public health authorities 48 hours after the vaccine was temporarily suspended. Data from this and similar networks can be used for rapid evaluation of vaccine safety.