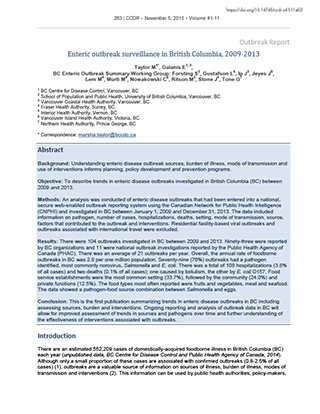 Objective: To describe trends in enteric disease outbreaks investigated in British Columbia (BC) between 2009 and 2013.

Methods: An analysis was conducted of enteric disease outbreaks that had been entered into a national, secure web-enabled outbreak reporting system using the Canadian Network for Public Health Intelligence (CNPHI) and investigated in BC between January 1, 2009 and December 31, 2013. The data included information on pathogen, number of cases, hospitalizations, deaths, setting, mode of transmission, source, factors that contributed to the outbreak and interventions. Residential facility-based viral outbreaks and outbreaks associated with international travel were excluded.

Results: There were 104 outbreaks investigated in BC between 2009 and 2013. Ninety-three were reported by BC organizations and 11 were national outbreak investigations reported by the Public Health Agency of Canada (PHAC). There was an average of 21 outbreaks per year. Overall, the annual rate of foodborne outbreaks in BC was 2.8 per one million population. Seventy-nine (76%) outbreaks had a pathogen identified, most commonly norovirus, Salmonella and E. coli. There was a total of 108 hospitalizations (3.8% of all cases) and two deaths (0.1% of all cases); one caused by botulism, the other by E. coli O157. Food service establishments were the most common setting (33.7%), followed by the community (24.0%) and private functions (12.5%). The food types most often reported were fruits and vegetables, meat and seafood. The data showed a pathogen-food source combination between Salmonella and eggs.

Conclusion: This is the first publication summarizing trends in enteric disease outbreaks in BC including assessing sources, burden and interventions. Ongoing reporting and analysis of outbreak data in BC will allow for improved assessment of trends in sources and pathogens over time and further understanding of the effectiveness of interventions associated with outbreaks.

There are an estimated 552,209 cases of domestically-acquired foodborne illness in British Columbia (BC) each year (unpublished data, BC Centre for Disease Control and Public Health Agency of Canada, 2014). Although only a small proportion of these cases are associated with confirmed outbreaks (0.8-2.5% of all cases)Footnote 1 outbreaks are a valuable source of information on sources of illness, burden of illness, modes of transmission and interventionsFootnote 2. This information can be used by public health authorities, policy-makers, food safety professionals and the food industry to set priorities and to plan and implement prevention programs. The province of BC implemented enteric disease outbreak surveillance in 2008 to describe trends, improve understanding, conduct source attribution and evaluate interventions and resource use.

The objective of this study is to describe trends in enteric disease outbreaks investigated in BC between 2009 and 2013 as well as to conduct source attribution and describe interventions.

Gastroenteritis epidemics are reportable in BCFootnote 3. In August 2008, a national, secure web-enabled outbreak reporting system, using the Canadian Network for Public Health Intelligence (CNPHI), was launched in BC and enteric disease outbreaks are entered by all local health authorities and by the BC Centre for Disease Control (BCCDC) into this system. This CNPHI system is also used by other jurisdictions across Canada.

All data is entered electronically (retrospectively) and includes information on pathogen, number of cases, hospitalizations, deaths, setting, mode of transmission, source, factors that contributed to the outbreak and interventions. Each local health authority is responsible for entering outbreaks investigated within their jurisdiction into the system. The BCCDC enters multi-regional outbreaks and the Public Health Agency of Canada (PHAC) enters multi-provincial/territorial outbreaks.

This report includes data on reported enteric disease outbreak investigations initiated between 2009 and 2013 in BC. National outbreaks (reported by PHAC) that involved cases residing in BC were also included. Residential facility-based viral outbreaks and outbreaks associated with international travel were excluded.

Data were extracted on March 6, 2014 and for national outbreaks on June 5, 2014. Comparison between outbreaks reported as foodborne and person-to-person transmission was conducted for setting, contributing factors and interventions. Source attribution was conducted using only outbreaks reported as foodborne. Outbreaks were associated with food handlers if a pathogen was identified in a food handler or an infected food handler was identified. Year and month of the outbreak investigation were based on the date the investigation started. Outbreak duration was calculated using the earliest and last symptom onset dates reported.

Norovirus was the most common outbreak cause followed by Salmonella. Both of these are in the top five pathogens causing domestically-acquired foodborne illness in BC (unpublished data. BC Centre for Disease Control and Public Health Agency of Canada, 2014). These are also the most common pathogens that cause outbreaks in the USFootnote 2. Viral outbreaks caused the largest number of cases and bacterial outbreaks were responsible for more hospitalizations and deaths. Bacterial, parasitic and toxin/chemical outbreaks were more frequently lab-confirmed compared to viral outbreaks. This is likely because viral outbreaks may be investigated and managed without laboratory diagnosis, are self-limited and not associated with severe presentation.

The proportion of hospitalized (3.8%) is comparable with the US (3.4%) and lower than European data (13.8%)Footnote 2Footnote 10. The case-fatality rate (0.1%) is lower than the US (0.7%) but slightly higher than European data (0.03%)Footnote 2Footnote 10. In the US and BC, Salmonella, E. coli and norovirus caused the largest number and proportion of hospitalizations. These similarities may be due to the fact that in both countries more severe cases are more likely to be tested and lab-confirmed. The difference between the proportion of hospitalization in Europe may be impacted by the more severe diseases included such as toxoplasmosis and tularaemia. The difference in proportion of deaths between BC, the US and Europe may be due to small numbers.

The source of exposure was identified for 72.6% of foodborne outbreaks. This is higher than what was previously reported for BC and other jurisdictionsFootnote 11Footnote 12. This may be because outbreaks with an identified source are more likely to be reported. Produce, meat and seafood were the most common foods (16%, 15% and 13% respectively). Produce caused more outbreaks than meat, eggs and dairy products. US analysis identified meat products as the top source of foodborne outbreaks, with a change in more recent years to a larger proportion of outbreaks caused by leafy vegetablesFootnote 2. Produce-associated outbreaks have increased in North AmericaFootnote 13Footnote 14Footnote 15. Monitoring these trends through outbreak data will enable re-prioritization of prevention efforts.

These data show an association between Salmonella and eggs. During this time period, BC investigated a large, protracted outbreak of Salmonella Enteritidis (SE) associated with eggsFootnote 8. SE outbreaks were still most commonly caused by eggs in the US, but a decrease in Salmonella outbreaks caused by eggs over time was notedFootnote 2. European data demonstrated that eggs and egg products were the most important food vehicles for SalmonellaFootnote 10. Food-specific attribution has been done previously in Canada twice using expert elicitation and once using outbreak dataFootnote 16Footnote 17Footnote 18. All three identified poultry meat as the most likely source of Salmonella infections. Eggs were identified as the second most common source among the expert elicitations. The expert elicitations also demonstrate a large proportion of enteric bacterial infections are attributed to produce which is comparable with the findings of this studyFootnote 16Footnote 17.

Outbreaks are a validated source attribution data. Strengths of outbreak data include: a clear link between the pathogen and food, availability of data over time and the inclusion of a wide-variety of food items that may not be represented using other methodsFootnote 9. However, not all outbreaks are investigated and reported and data from all systems may not be directly comparableFootnote 19Footnote 20.

Food handlers were identified as the contributing factor of nine norovirus outbreaks. This emphasizes the need for improved education and resources for food handlers and their employers and interventions to identify and exclude ill workers in a timely way.

Education and sanitizing the facility were the most commonly used interventions. Other interventions, such as recalls or policy changes are applied less often as they require identification of a specific food source or issue. Interventions are impacted by the setting they occur in, particularly those related to institutional settings where person-to-person transmission may be more common. However, it is not possible to comment on whether the interventions used were effective at preventing further cases as dates of the interventions were not available. Literature is limited regarding the effectiveness of outbreak interventions, particularly those that are widespread or community-based. Further investigation would assist decision-making, resource allocation and outbreak investigations.

While this analysis has demonstrated that the surveillance system is meeting its objectives there are limitations. The focus is on a small number of outbreaks which were reported over a short period of time. Therefore, more specific analysis by pathogen or by assessing trends over time is not possible. This limitation will be overcome eventually as more outbreaks are reported. In addition, the system relies on public health authorities to enter outbreaks in their jurisdiction. While processes have been established to verify entry of known outbreaks, it is possible that not all outbreaks are identified, investigated and reported. Finally, decentralized data entry may also impact data quality. When data quality issues are identified, standards or system improvements are developed.

Surveillance of enteric disease outbreaks in BC provides information on trends, sources, settings and modes of transmission. These data have been used to inform technical and risk assessment, reports and publications. Further data and analysis could be used to inform local food safety priorities, develop messaging targeting pathogen-food combinations or direct resources at specific interventions.

Ongoing reporting and analysis of outbreak data in BC will allow for improved assessment of trends in sources and pathogens over time and further work to understand the effectiveness outbreak of interventions.

The authors would like to acknowledge the contribution of their Health Authority colleagues in entering outbreaks and BC laboratories and the BC Public Health Microbiology and Reference Laboratory for their diagnostic support.