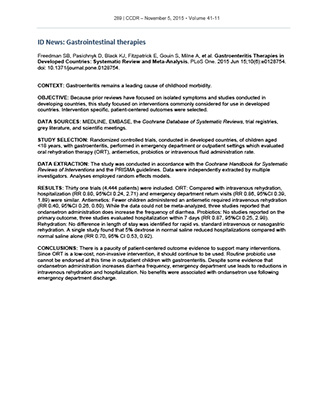 CONTEXT: Gastroenteritis remains a leading cause of childhood morbidity.

OBJECTIVE: Because prior reviews have focused on isolated symptoms and studies conducted in developing countries, this study focused on interventions commonly considered for use in developed countries. Intervention specific, patient-centered outcomes were selected.

DATA EXTRACTION: The study was conducted in accordance with the Cochrane Handbook for Systematic Reviews of Interventions and the PRISMA guidelines. Data were independently extracted by multiple investigators. Analyses employed random effects models.

CONCLUSIONS: There is a paucity of patient-centered outcome evidence to support many interventions. Since ORT is a low-cost, non-invasive intervention, it should continue to be used. Routine probiotic use cannot be endorsed at this time in outpatient children with gastroenteritis. Despite some evidence that ondansetron administration increases diarrhea frequency, emergency department use leads to reductions in intravenous rehydration and hospitalization. No benefits were associated with ondansetron use following emergency department discharge.