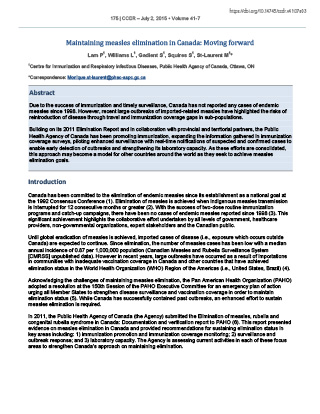 Due to the success of immunization and timely surveillance, Canada has not reported any cases of endemic measles since 1998. However, recent large outbreaks of imported-related measles have highlighted the risks of reintroduction of disease through travel and immunization coverage gaps in sub-populations.

Building on its 2011 Elimination Report and in collaboration with provincial and territorial partners, the Public Health Agency of Canada has been promoting immunization, expanding the information gathered in immunization coverage surveys, piloting enhanced surveillance with real-time notifications of suspected and confirmed cases to enable early detection of outbreaks and strengthening its laboratory capacity. As these efforts are consolidated, this approach may become a model for other countries around the world as they seek to achieve measles elimination goals.

Canada has been committed to the elimination of endemic measles since its establishment as a national goal at the 1992 Consensus ConferenceFootnote 1. Elimination of measles is achieved when indigenous measles transmission is interrupted for 12 consecutive months or greaterFootnote 2. With the success of two-dose routine immunization programs and catch-up campaigns, there have been no cases of endemic measles reported since 1998Footnote 3. This significant achievement highlights the collaborative effort undertaken by all levels of government, healthcare providers, non-governmental organizations, expert stakeholders and the Canadian public.

Until global eradication of measles is achieved, imported cases of disease (i.e., exposure which occurs outside Canada) are expected to continue. Since elimination, the number of measles cases has been low with a median annual incidence of 0.87 per 1,000,000 population (Canadian Measles and Rubella Surveillance System [CMRSS] unpublished data). However in recent years, large outbreaks have occurred as a result of importations in communities with inadequate vaccination coverage in Canada and other countries that have achieved elimination status in the World Health Organization (WHO) Region of the Americas (i.e., United States, Brazil)Footnote 4.

Acknowledging the challenges of maintaining measles elimination, the Pan American Health Organization (PAHO) adopted a resolution at the 150th Session of the PAHO Executive Committee for an emergency plan of action urging all Member States to strengthen disease surveillance and vaccination coverage in order to maintain elimination statusFootnote 5. While Canada has successfully contained past outbreaks, an enhanced effort to sustain measles elimination is required.

In 2011, the Public Health Agency of Canada (the Agency) submitted the Elimination of measles, rubella and congenital rubella syndrome in Canada: Documentation and verification report to PAHOFootnote 6. This report presented evidence on measles elimination in Canada and provided recommendations for sustaining elimination status in key areas including: 1) immunization promotion and immunization coverage monitoring; 2) surveillance and outbreak response; and 3) laboratory capacity. The Agency is assessing current activities in each of these focus areas to strengthen Canada's approach on maintaining elimination.

Sustaining measles elimination requires at least 95% vaccine coverage for all population cohortsFootnote 7. In Canada, current national estimates of childhood measles vaccination indicate adequate coverage with 95% of all children receiving two doses of a measles-containing vaccine by age sevenFootnote 8. However, immunization coverage at the provincial/territorial/local levels is heterogeneous with sub-populations where vaccination uptake is suboptimal or vaccination is refused. The 2014 BC outbreakFootnote 9 and the recent Quebec outbreak in early 2015Footnote 4 are examples of measles imported into a community where vaccinations were refused for religious/philosophical reasons. Those who refuse all vaccines represent only a small part of the continuum of vaccine hesitancyFootnote 10. Some parents may delay or be selective in providing all routine vaccinations for their children, resulting in individuals susceptible to infectionFootnote 10.

The Strategic Advisory Group of Experts (SAGE) on Immunization Working Group on Vaccine Hesitancy recommends countries have a plan to measure and address vaccine hesitancy as part of their immunization program activitiesFootnote 11. Through the Canadian National Immunization Strategy, an expert Vaccine Acceptance and Uptake Working Group has been formed to address issues of vaccine access and uptake in order to contribute to improving vaccine coverage levels in Canada. The Agency continues to promote immunization through dissemination of educational material for the public and supporting innovative initiatives such as ImmunizeCA, a free mobile vaccine application to help Canadians easily track their immunization recordsFootnote 12.

In the absence of a national network of immunization registries, periodic population-based surveys are necessary to verify adequate national immunization coverage. The Agency monitors national measles immunization coverage through the Childhood National Immunization Coverage Survey (cNICS)Footnote 8. The sample for the 2013 survey cycle has been expanded to provide estimates at the provincial and territorial levels. The healthcare provider validation phase was completed in 2014 and the survey results are expected to be published later this year. Parental knowledge, attitudes and behaviours regarding vaccination are also captured in cNICS to better understand the factors influencing immunization decisions.

A key component of managing imported cases and ensuring a quick and effective outbreak response is early detection via comprehensive surveillance activities. From 1998 to 2014, there have been 159 identified measles importations from 37 different countries and only 28% of the imported cases resulted in secondary transmission (CMRSS unpublished data). Measles cases are captured primarily by CMRSS through weekly reports from provinces and territoriesFootnote 14.

An Agency pilot project, Measles and Rubella Surveillance (MARS) is a web-based system which provides real-time notifications of suspected and confirmed cases. Since 2011, MARS has been implemented in three jurisdictions (British Columbia, Alberta and Newfoundland). It provides a platform for epidemiological and laboratory data linkage from provincial laboratory, provincial public health unit and national medical laboratory partners. As part of the Agency's priorities to expand real-time access to public health information, MARS will be offered to other jurisdictions in late 2015.

While measles outbreaks are rare in the post-elimination era, larger outbreaks can be a tremendous burden on public health resources. There is a paucity of data on the costs associated with the control of measles outbreaks in Canada and estimates have been limited. In 2014, an outbreak of four measles cases in Ottawa required the involvement of 60 public health employees who logged 1,400 work hoursFootnote 15. This created a $28,000 (CDN) deficit in the local public health unit's first quarter budgetFootnote 16.

The Agency provides guidance to provinces/territories in supporting investigation and control of outbreaks. In an effort to provide the best available evidence, the Agency collaborated with the Canadian Agency for Drugs and Technologies in Health (CADTH) to conduct a systematic review on interventions to reduce secondary spread of measlesFootnote 17and a cost analysis to estimate resource use associated with measles outbreaksFootnote 18.

Molecular surveillance and genotyping (the process of determining differences in the genetic make-up of an organism) is essential for understanding measles epidemiology in Canada. It is an invaluable tool for public health investigation for confirming exposure history, determining links between concurrent outbreaks and identifying potential sources of importationsFootnote 19. Additionally, it allows us to verify Canada's elimination status by distinguishing between different strain variants and widespread circulation of one strain.

As we move toward global eradication of measles, the genomic diversity of the virus will decrease. As such, it will become increasingly difficult to distinguish multiple importations from endemic transmission when sporadic cases have the same genetic sequence. Extended genotyping will be required more frequently for adequate surveillance.

With ongoing measles activity in other regions of the world, Canada's elimination status will continue to be challenged and will likely result in limited outbreaks, as seen recently in BCFootnote 9 and QuebecFootnote 4. The threat of importations, combined with suboptimal vaccination coverage in sub-populations, poses a risk of reintroduction of disease. In order for Canada to sustain measles elimination, enhancing current programs and continuing collaboration at all levels of government is required. Building on the recommendations in its 2011 Elimination ReportFootnote 6 the Agency has been promoting immunization, expanding the information gathered in immunization coverage surveys, piloting enhanced surveillance with real-time notifications of suspected and confirmed cases to enable early detection of outbreaks and strengthening its laboratory capacity. As these efforts are consolidated, this approach may become a model for other countries around the world as they seek to achieve measles elimination.

Po-Po Lam is supported through a science-policy fellowship from the Canadian Institutes of Health Research (CIHR).