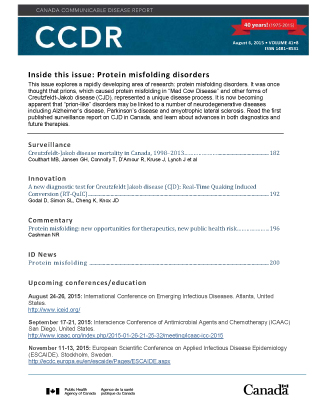 Inside this issue: Protein misfolding disorders

This issue explores a rapidly developing area of research: protein misfolding disorders. It was once thought that prions, which cause protein misfolding in “Mad Cow Disease” and other forms of Creutzfeldt-Jakob disease (CJD), represented a unique disease process. It is now becoming apparent that “prion-like” disorders may be linked to a number of neurodegenerative diseases including Alzheimer’s disease, Parkinson’s disease and amyotrophic lateral sclerosis. Read the first published surveillance report on CJD in Canada, and learn about advances in both diagnostics and future therapies.