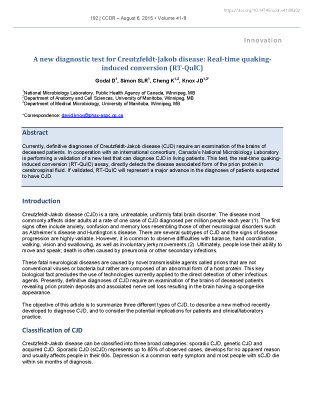 Currently, definitive diagnoses of Creutzfeldt-Jakob disease (CJD) require an examination of the brains of deceased patients. In cooperation with an international consortium, Canada’s National Microbiology Laboratory is performing a validation of a new test that can diagnose CJD in living patients. This test, the real-time quaking-induced conversion (RT-QuIC) assay, directly detects the disease associated form of the prion protein in cerebrospinal fluid. If validated, RT-QuIC will represent a major advance in the diagnoses of patients suspected to have CJD.

Creutzfeldt-Jakob disease (CJD) is a rare, untreatable, uniformly fatal brain disorder. The disease most commonly affects older adults at a rate of one case of CJD diagnosed per million people each yearFootnote 1. The first signs often include anxiety, confusion and memory loss resembling those of other neurological disorders such as Alzheimer’s disease and Huntington’s disease. There are several subtypes of CJD and the signs of disease progression are highly variable. However, it is common to observe difficulties with balance, hand coordination, walking, vision and swallowing, as well as involuntary jerky movementsFootnote 2. Ultimately, people lose their ability to move and speak; death is often caused by pneumonia or other secondary infections.

These fatal neurological diseases are caused by novel transmissible agents called prions that are not conventional viruses or bacteria but rather are composed of an abnormal form of a host protein. This key biological fact precludes the use of technologies currently applied to the direct detection of other infectious agents. Presently, definitive diagnoses of CJD require an examination of the brains of deceased patients revealing prion protein deposits and associated nerve cell loss resulting in the brain having a sponge-like appearance.

The objective of this article is to summarize three different types of CJD, to describe a new method recently developed to diagnose CJD, and to consider the potential implications for patients and clinical/laboratory practice.

Creutzfeldt-Jakob disease can be classified into three broad categories: sporadic CJD, genetic CJD and acquired CJD. Sporadic CJD (sCJD) represents up to 85% of observed cases, develops for no apparent reason and usually affects people in their 60s. Depression is a common early symptom and most people with sCJD die within six months of diagnosis.

Genetic CJD (gCJD) can present like sporadic CJD or may present as a slowly progressing dementia that develops over years. Some of the more common CJD mutations have been tracked through large multigenerational families and display autosomal dominant inheritance. Nonetheless, in 50% of genetic CJD diagnoses there is no familial history of CJD or other neurological disorders suggesting low penetranceFootnote 3.

Acquired CJD, accounting for less than 1% of cases, results from exposure to the infectious agent. Iatrogenic CJD describes cases of acquired CJD related to medical procedures. New variant CJD (vCJD) is acquired through dietary exposure to beef infected with bovine spongiform encephalopathy (BSE), the scientific term for mad cow disease. Due to the effective implementation of public health measuresFootnote 4 the risk of acquiring variant CJD in Canada is nearly nonexistent. Indeed, there has never been a case of domestically acquired variant CJD reported in CanadaFootnote 1.

Currently, the Prion Laboratory Section at the National Microbiology Laboratory measures the level of three proteins (14-3-3, tau and S100) in CSF, to support clinicians dealing with suspected cases of CJD. Increased levels of these three surrogate markers are consistent with a diagnosis of CJD, but they have variable sensitivity and specificity and consequently cannot be used to definitively diagnose CJDFootnote 5.

The molecular basis of the new test

At the molecular level CJD disease progression is characterized by the conversion of the normally expressed cellular prion protein, PrPc, into the misfolded disease associated isoform, PrPd (Figure 1). The infectious form of the prion protein, PrPd, acts as a “seed” and interacts with normal cellular form of the prion protein, PrPc, and promotes its conversion to the infectious form. As the disease progresses the amount of PrPd available to convert PrPc increases, accelerating the conversion of PrPc to PrPd. Eventually this leads to the generation of the large amounts of PrPd observed in the brains of CJD patients post-mortem.

In contrast to what is observed in the brain, only low amounts of PrPd are present in other tissues making detection in an easily accessible sample problematic. A solution to this challenge has been the development of a technique, known as real-time quaking-induced conversion (RT-QuIC). RT-QuIC exploits the ability of PrPd to promote the conformational conversion of PrPcFootnote 6Footnote 7Footnote 8. In RT-QuIC a recombinant PrP (rPrP) made in the laboratory is used as the substrate and patient CSF samples, potentially containing PrPd, are tested to see if they will “seed” the conversion process (Figure 1). Cycles of shaking and incubation will cause infected CSF, containing PrPd, to generate greatly increased amounts of rPrPd facilitating subsequent detection by traditional methods.

RT-QuIC has been demonstrated to be a highly sensitive and specific method to detect the presence of the disease-associated isoform of the prion protein, PrPd, in the CSF of patients with sporadic CJDFootnote 9Footnote 10Footnote 11Footnote 12Footnote 13. Direct detection of the disease-causing agent is a major advance in the development of a diagnostic test for sporadic CJD as it can be used for definitive diagnoses while the patient is still alive. However, ongoing validation studies have demonstrated that the outcomes of RT-QuIC reactions depend on the exact conditions employed (biochemical, chemical and physical), as well as the nature of the sample and recombinant substrate. The protocol under evaluation by the National Microbiology Laboratory has been tested extensively for the detection of sporadic CJDFootnote 10Footnote 11Footnote 15Footnote 16. Using this protocol the Prion Laboratory Section achieved 100% sensitivity and 100% specificity in the evaluation of an external sporadic CJD infected CSF proficiency panel. This is comparable to the 91% sensitivity and 98% specificity reported by other laboratoriesFootnote 8Footnote 9. Being part of an international consortium using the same standardized protocol should permit analyses of sufficient numbers of the rarer vCJD and gCJD samples to determine the efficacy of our version of RT-QuIC in these cases.

The establishment of a specific and sensitive test will aid health care workers as well as patients and their families in dealing with suspected cases of CJD. A more specific and sensitive diagnostic test for CJD will also help address wider public health considerations concerning the transmission of CJD from patient to patient through the use of contaminated surgical instruments and tissues, including blood. Once validation is completed RT-QuIC will be a service offered by the Prion Laboratory Section of the National Microbiology Laboratory, making a more sensitive and specific ante-mortem test for CJD available to Canadian health care professionals.