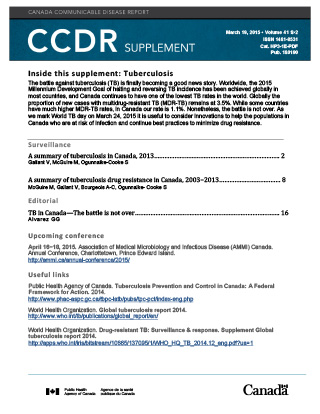 Inside this supplement: Tuberculosis

The battle against tuberculosis (TB) is finally becoming a good news story. Worldwide, the 2015 Millennium Development Goal of halting and reversing TB incidence has been achieved globally in most countries, and Canada continues to have one of the lowest TB rates in the world. Globally the proportion of new cases with multidrug-resistant TB (MDR-TB) remains at 3.5%. While some countries have much higher MDR-TB rates, in Canada our rate is 1.1%. Nonetheless, the battle is not over. As we mark World TB day on March 24, 2015 it is useful to consider innovations to help the populations in Canada who are at risk of infection and continue best practices to minimize drug resistance.

Editorial
TB in Canada—The battle is not over
Alvarez GG

Public Health Agency of Canada. Tuberculosis Prevention and Control in Canada: A Federal Framework for Action. 2014.