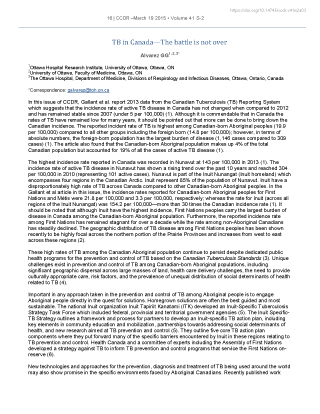 TB in Canada—The battle is not over

In this issue of CCDR, Gallant et al. report 2013 data from the Canadian Tuberculosis (TB) Reporting System which suggests that the incidence rate of active TB disease in Canada has not changed when compared to 2012 and has remained stable since 2007 (under 5 per 100,000)Footnote 1. Although it is commendable that in Canada the rates of TB have remained low for many years, it should be pointed out that more can be done to bring down the Canadian incidence. The reported incident rate of TB is highest among Canadian-born Aboriginal peoples (19.9 per 100,000) compared to all other groups including the foreign born (14.8 per 100,000); however, in terms of absolute numbers, the foreign-born population has the largest burden of disease (1,146 cases compared to 309 cases)Footnote 1. The article also found that the Canadian-born Aboriginal population makes up 4% of the total Canadian population but accounted for 19% of all the cases of active TB diseaseFootnote 1.

The highest incidence rate reported in Canada was recorded in Nunavut at 143 per 100,000 in 2013Footnote 1. The incidence rate of active TB disease in Nunavut has shown a rising trend over the past 10 years and reached 304 per 100,000 in 2010 (representing 101 active cases). Nunavut is part of the Inuit Nunangat (Inuit homeland) which encompasses four regions in the Canadian Arctic. Inuit represent 85% of the population of Nunavut. Inuit have a disproportionately high rate of TB across Canada compared to other Canadian-born Aboriginal peoples. In the Gallant et al article in this issue, the incidence rates reported for Canadian-born Aboriginal peoples for First Nations and Métis were 21.8 per 100,000 and 3.3 per 100,000, respectively; whereas the rate for Inuit (across all regions of the Inuit Nunangat) was 154.2 per 100,000–more than 30 times the Canadian incidence rateFootnote 1. It should be noted that although Inuit have the highest incidence, First Nations peoples carry the largest burden of disease in Canada among the Canadian-born Aboriginal population. Furthermore, the reported incidence rate among First Nations has remained stagnant for over a decade while the rate among non-Aboriginal Canadians has steadily declined. The geographic distribution of TB disease among First Nations peoples has been shown recently to be highly focal across the northern portion of the Prairie Provinces and increases from west to east across these regionsFootnote 2.

These high rates of TB among the Canadian Aboriginal population continue to persist despite dedicated public health programs for the prevention and control of TB based on the Canadian Tuberculosis StandardsFootnote 3. Unique challenges exist in prevention and control of TB among Canadian-born Aboriginal populations, including significant geographic dispersal across large masses of land, health care delivery challenges, the need to provide culturally appropriate care, risk factors, and the prevalence of unequal distribution of social determinants of health related to TBFootnote 4.

Important in any approach taken in the prevention and control of TB among Aboriginal people is to engage Aboriginal people directly in the quest for solutions. Homegrown solutions are often the best guided and most sustainable. The national Inuit organization Inuit Tapiriit Kanatami (ITK) developed an Inuit-Specific Tuberculosis Strategy Task Force which included federal, provincial and territorial government agenciesFootnote 5. The Inuit Specific-TB Strategy outlines a framework and process for partners to develop an Inuit-specific TB action plan, including key elements in community education and mobilization, partnerships towards addressing social determinants of health, and new research aimed at TB prevention and controlFootnote 5. They outline five core TB action plan components where they put forward many of the specific barriers encountered by Inuit in these regions relating to TB prevention and control. Health Canada and a committee of experts including the Assembly of First Nations developed a strategy against TB to inform TB prevention and control programs that service the First Nations on-reserveFootnote 6.

New technologies and approaches for the prevention, diagnosis and treatment of TB being used around the world may also show promise in the specific environments faced by Aboriginal Canadians. Recently published work done in Nunavut through a collaboration between Nunavut Tunngavik Incorporated (NTI), the Government of Nunavut, and the Ottawa Hospital Research Institute to raise community awareness about TB followed by a door-to-door screening campaign in Iqaluit may contribute to successful control of TB in Aboriginal communities and highlights the strength in Aboriginal participatory researchFootnote 7. The Xpert® MTB/RIF diagnostic assay, which is an automated, cartridge-based, real-time polymerase chain reaction assay (Cepheid, Sunnyvale, California) for rapid detection of Mycobacterium tuberculosis (MTB) disease and rifampin resistanceFootnote 8 shows significant promise in diagnosing TB earlier in remote regions where no TB laboratory facilities are available and where often the highest burdens of TB disease are seen in Canada. The next generation of whole genome sequencing, a tool that allows the complete DNA of the TB genome to be sequenced, offers significantly better resolution than current methods and has shown significant promise to better understand transmission dynamics in the Aboriginal Canadian populationFootnote 9Footnote 10. Further research in this area will help further characterize transmission dynamics of the disease in this population. Other technologies such as the interferon gamma release assay (IGRA) for the diagnosis of latent TB infection is a blood test that is not usually affected by the Bacille Calmette-Guérin (BCG) vaccine and was shown to be feasible in the Arctic settingFootnote 3Footnote 11. Recent evidence involving a large randomized control trial supporting a significantly shortened treatment for latent TB infection, rifapentine and isoniazid (INH), given once a week for 12 weeks was shown to be as effective as nine months of INH (the current standard), also shows significant promiseFootnote 12. The results have been recently replicated in children as wellFootnote 13.

Short of discovering a new effective vaccine to prevent TB, we need to find new ways of preventing TB disease in those that have latent infection and interrupting transmission in those that have active TB disease. In addition, innovative ways to reduce the unequal distribution of social determinants of health that drive TB in many Aboriginal Canadian populations are and will continue to be of paramount importance in tackling the disease. Despite the fact that the rates of TB have remained stable for the past several years in Canada, the fight against TB is not over–the battle is not yet won. Renewed investments in research, program development and evaluation that includes performance indicators are needed before we can start talking about eliminating this disease once and for all among Canadian-born Aboriginal peoples.