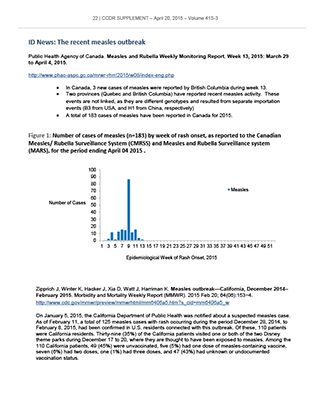 On January 5, 2015, the California Department of Public Health was notified about a suspected measles case. As of February 11, a total of 125 measles cases with rash occurring during the period December 28, 2014, to February 8, 2015, had been confirmed in U.S. residents connected with this outbreak. Of these, 110 patients were California residents. Thirty-nine (35%) of the California patients visited one or both of the two Disney theme parks during December 17 to 20, where they are thought to have been exposed to measles. Among the 110 California patients, 49 (45%) were unvaccinated, five (5%) had one dose of measles-containing vaccine, seven (6%) had two doses, one (1%) had three doses, and 47 (43%) had unknown or undocumented vaccination status.

Annual attendance at Disney theme parks in California is estimated at 24 million, including many international visitors from countries where measles is endemic. This outbreak illustrates the continued importance of ensuring high measles vaccination coverage in the United States.

Your participation is requested in an important survey being conducted by the Public Health Agency of Canada (PHAC) to assess the views and suggestions of key immunization stakeholders on resources developed by the National Advisory Committee on Immunization (NACI).

It is very important that NACI’s advice and information products are meeting the needs of those who provide vaccinations, make vaccine policy recommendations or are working in other ways in the area of vaccines or immunization. CCDR readers have been identified as a stakeholder for NACI, and your input to improve NACI products on immunization recommendations is being requested by means of a survey which will take about 10 minutes to complete. Your feedback is critical to ensure that your needs as a stakeholder are met. Please take this opportunity to have your voice heard by clicking on the link below to respond to the survey before May 12, 2015. Your responses will be treated in complete confidence; no individuals will be identified in any way. If you have any questions about this survey, please contact naci-ccni@phac-aspc.gc.ca.

The survey can be found at this link: Evaluation of NACI Products and Processes

Thank you for your support!