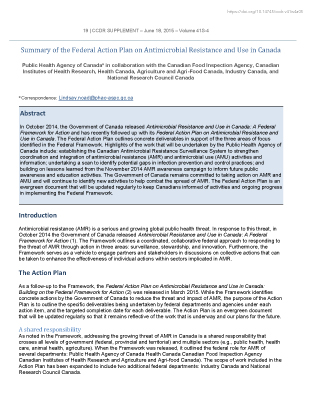 In October 2014, the Government of Canada released Antimicrobial Resistance and Use in Canada: A Federal Framework for Action and has recently followed up with its Federal Action Plan on Antimicrobial Resistance and Use in Canada. The Federal Action Plan outlines concrete deliverables in support of the three areas of focus identified in the Federal Framework. Highlights of the work that will be undertaken by the Public Health Agency of Canada include: establishing the Canadian Antimicrobial Resistance Surveillance System to strengthen coordination and integration of antimicrobial resistance (AMR) and antimicrobial use (AMU) activities and information; undertaking a scan to identify potential gaps in infection prevention and control practices; and building on lessons learned from the November 2014 AMR awareness campaign to inform future public awareness and education activities. The Government of Canada remains committed to taking action on AMR and AMU and will continue to identify new activities to help combat the spread of AMR. The Federal Action Plan is an evergreen document that will be updated regularly to keep Canadians informed of activities and ongoing progress in implementing the Federal Framework.

Antimicrobial resistance (AMR) is a serious and growing global public health threat. In response to this threat, in October 2014 the Government of Canada released Antimicrobial Resistance and Use in Canada: A Federal Framework for ActionFootnote 1. The Framework outlines a coordinated, collaborative federal approach to responding to the threat of AMR through action in three areas: surveillance, stewardship, and innovation. Furthermore, the Framework serves as a vehicle to engage partners and stakeholders in discussions on collective actions that can be taken to enhance the effectiveness of individual actions within sectors implicated in AMR.

As a follow-up to the Framework, the Federal Action Plan on Antimicrobial Resistance and Use in Canada: Building on the Federal Framework for ActionFootnote 2 was released in March 2015. While the Framework identifies concrete actions by the Government of Canada to reduce the threat and impact of AMR, the purpose of the Action Plan is to outline the specific deliverables being undertaken by federal departments and agencies under each action item, and the targeted completion date for each deliverable. The Action Plan is an evergreen document that will be updated regularly so that it remains reflective of the work that is underway and our plans for the future.

As noted in the Framework, addressing the growing threat of AMR in Canada is a shared responsibility that crosses all levels of government (federal, provincial and territorial) and multiple sectors (e.g., public health, health care, animal health, agriculture). When the Framework was released, it outlined the federal role for AMR of several departments: Public Health Agency of Canada Health Canada Canadian Food Inspection Agency Canadian Institutes of Health Research and Agriculture and Agri-food Canada). The scope of work included in the Action Plan has been expanded to include two additional federal departments: Industry Canada and National Research Council Canada.

As indicated in the Framework, provinces, territories, and other stakeholders also play a key role by virtue of their responsibility for the delivery of health care, approval of antimicrobials for medical coverage, and the regulation of antimicrobial use (AMU) in veterinary medicine and agriculture. The Action Plan reaffirms that the Government of Canada is committed to working with all jurisdictions and stakeholders to deliver on the Action Plan.

In addition to its work in the areas of surveillance, stewardship and innovation, the Government of Canada is committed to taking a leadership role both nationally and internationally. In support of this commitment, the Action Plan highlights key leadership activities being undertaken. These include: Canada’s engagement with international partners on the development and implementation of the World Health Organization’s Global Action Plan on AMR; efforts to develop a pan-Canadian approach to address AMR with federal, provincial and territorial (F/P/T) partners, and human health, animal health, agri-food and industry stakeholders; international coordination of research efforts; and, as part of the work under the Global Health Security Agenda, supporting the development of an integrated and global package of activities to combat AMR that spans human, animal, agricultural, food, and environmental sectors.

Action 1: Establish and strengthen surveillance systems to identify new threats or changing patterns in antimicrobial resistance and use, in human and animal settings.

Comprehensive information is needed on the scope of the problem of AMR, particularly outside of hospital settings (e.g., how are antimicrobials being used; how many bacteria are resistant; to which drugs; how are they being spread). This information is necessary to determine the full magnitude of the problem and is essential to monitor the effectiveness of stewardship interventions—this information can only be gathered from effective surveillance.

In Canada, there are already robust surveillance systems in place, and we will continue these existing surveillance activities, as well as the supporting laboratory services, in support of efforts to combat AMR. These systems will also be built upon to enhance our surveillance of AMR. Examples of some of the deliverables under this action area include:

The Canadian Institutes of Health Research, along with the Public Health Agency of Canada, will support research and dissemination of results regarding studies on interventions and surveillance of AMR. (Target completion date: December 2019)

AMR occurs whenever antimicrobials are used and will therefore be a constant factor in both human and veterinary medicine. Strong stewardship practices by everyone are therefore essential to continue to combat AMR. Given the importance of stewardship, a number of activities are outlined under the two actions in this area.

Action 2: Strengthen the promotion of the appropriate use of antimicrobials in human and veterinary medicine.

An important consideration in preserving the effectiveness of existing antimicrobial drugs is promoting disease prevention efforts with the aim of minimizing or eliminating the need for antimicrobials. In addition to infection prevention and control, the Government of Canada will continue efforts to facilitate and enhance education and awareness on when and how to use antimicrobials, as well as the choice of the correct antimicrobials to use for treatment of certain conditions. In addition, significant progress in the agri-food sector has been made to promote the prudent use of antimicrobials in food animal production. Key activities moving forward involving both sectors include:

Action 3: Work with the animal agriculture sector partners to strengthen the regulatory framework on veterinary medicines and medicated feeds, including facilitating access to alternatives, and encourage the adoption of practices in order to reduce the use of antimicrobials.

In addition to efforts to improve infection prevention and control measures, as well as promote education and awareness, the Government of Canada has an important role in the regulation of animal health products in Canada, including the importation, licensing, and sale of veterinary drugs, medicated feeds, and vaccines. In support of this role, the following activities will be undertaken:

As outlined in the Federal Framework, the Government of Canada supports ongoing domestic health research and innovation while collaborating with international partners to contribute to global research efforts on AMR, AMU, novel therapies and alternatives. Some of the key activities in this area will include:

The Government of Canada remains committed to taking action on AMR and AMU. As such, we will continue to work with federal, provincial, territorial, and international health and agriculture partners, as well as other stakeholders, to identify how we can strengthen existing and planned activities. We will also continue to work to identify new activities to help combat the spread of AMR. The Federal Action Plan is the first in a series to keep Canadians informed of our activities and our ongoing progress in implementing the Federal Framework.

Many thanks to all collaborators at the Public Health Agency of Canada, Health Canada, the Canadian Food Inspection Agency, the Canadian Institutes of Health Research, Agriculture and Agri-Food Canada, Industry Canada, and National Research Council Canada.

Public Health Agency of Canada. Antimicrobial Resistance and Use in Canada: A Federal Framework for Action. 2014 Oct 24.
http://healthycanadians.gc.ca/drugs-products-medicaments-produits/antibiotic-resistance-antibiotique/antimicrobial-framework-cadre-antimicrobiens-eng.php.

Public Health Agency of Canada. Federal Action Plan on Antimicrobial Resistance and Use in Canada: Building on the Federal Framework for Action. 2015 Mar 31. http://healthycanadians.gc.ca/publications/drugs-products-medicaments-produits/antibiotic-resistance-antibiotique/action-plan-daction-eng.php.