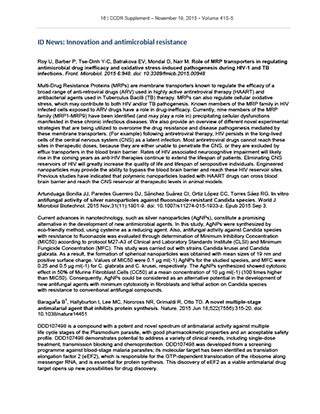 Multi-Drug Resistance Proteins (MRPs) are membrane transporters known to regulate the efficacy of a broad range of anti-retroviral drugs (ARV) used in highly active antiretroviral therapy (HAART) and antibacterial agents used in Tuberculus Bacilli (TB) therapy. MRPs can also regulate cellular oxidative stress, which may contribute to both HIV and/or TB pathogenesis. Known members of the MRP family in HIV infected cells exposed to ARV drugs have a role in drug-inefficacy. Currently, nine members of the MRP family (MRP1-MRP9) have been identified (and may play a role in) precipitating cellular dysfunctions manifested in these chronic infectious diseases. We also provide an overview of different novel experimental strategies that are being utilized to overcome the drug resistance and disease pathogenesis mediated by these membrane transporters. (For example) following antiretroviral therapy, HIV persists in the long-lived cells of the central nervous system (CNS) as a latent infection. Most antiretroviral drugs cannot reach these sites in therapeutic doses, because they are either unable to penetrate the CNS, or they are excluded by efflux transporters in the blood brain barrier. Rates of HIV associated neurocognitive impairment will likely rise in the coming years as anti-HIV therapies continue to extend the lifespan of patients. Eliminating CNS reservoirs of HIV will greatly increase the quality of life and lifespan of seropositive individuals. Engineered nanoparticles may provide the ability to bypass the blood brain barrier and reach these HIV reservoir sites. Previous studies have indicated that polymeric nanoparticles loaded with HAART drugs can cross blood brain barrier and reach the CNS reservoir at therapeutic levels in animal models.

Current advances in nanotechnology, such as silver nanoparticles (AgNPs), constitute a promising alternative in the development of new antimicrobial agents. In this study, AgNPs were synthesized by eco-friendly method, using cysteine as a reducing agent. Also, antifungal activity against Candida species with resistance to fluconazole was evaluated through determination of Minimum Inhibitory Concentration (MIC50) according to protocol M27-A3 of Clinical and Laboratory Standards Institute (CLSI) and Minimum Fungicide Concentration (MFC). This study was carried out with strains Candida krusei and Candida glabrata. As a result, the formation of spherical nanoparticles was obtained with mean sizes of 19 nm and positive surface charge. Values of MIC50 were 0.1 µg ml(-1) AgNPs for the studied species, and MFC were 0.25 and 0.5 µg ml(-1) for C. glabrata and C. krusei, respectively. The AgNPs synthesized showed cytotoxic effect in 50% of Murine Fibroblast Cells (CC50) at a mean concentration of 10 µg ml(-1) (100 times higher than MIC50). Consequently, AgNPs could be considered as an alternative potential in the development of new antifungal agents with minimum cytotoxicity in fibroblasts and lethal action on Candida species with resistance to conventional antifungal compounds.

DDD107498 is a compound with a potent and novel spectrum of antimalarial activity against multiple life cycle stages of the Plasmodium parasite, with good pharmacokinetic properties and an acceptable safety profile. DDD107498 demonstrates potential to address a variety of clinical needs, including single-dose treatment, transmission blocking and chemoprotection. DDD107498 was developed from a screening programme against blood-stage malaria parasites; its molecular target has been identified as translation elongation factor 2 (eEF2), which is responsible for the GTP-dependent translocation of the ribosome along messenger RNA, and is essential for protein synthesis. This discovery of eEF2 as a viable antimalarial drug target opens up new possibilities for drug discovery.