The purpose of this web-report is to update our "Salmonella Heidelberg – Ceftiofur-Related Resistance in Human and Retail Chicken Isolates" posted in 2007 (http://www.phac-aspc.gc.ca/cipars-picra/heidelberg/heidelberg-eng.php). The following is a simple description of the data, based on the CIPARS 2006 Annual Report, together with additional data up to and including 2008. Please refer to Section III – Integrated Surveillance of this 2006 Annual Report for an in-depth description of these surveillance findings, limitations to the data, as well as CIPARS activities in this area.

Since 2005, CIPARS identified only one ceftiofur-resistant isolate out of 37 S. Heidelberg collected from retail chicken from Saskatchewan. In British Columbia, 56% of the nine S. Heidelberg detected in chicken through pilot retail surveillance conducted in 2005, 2007, and 20081 were resistant to ceftiofur (Table 1).

The decreasing prevalence of S. Heidelberg in both retail chicken and humans highlighted in the previous S. Heidelberg report was confirmed after 2006 in the provinces of Ontario and Québec. This decrease appears to be independent of the susceptibility profile. 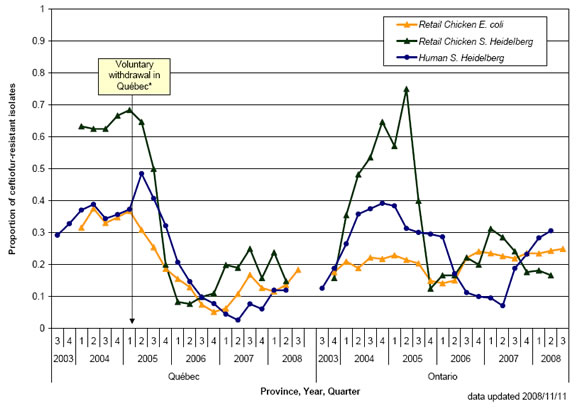 * The yearly averages of the quarterly values presented in Figure 1 do not necessarily match annual proportions presented in Table 1, because in Figure 1 each of these data points represents the average of the previous three quarters.