Protecting National Security in Partnership with all Canadians

WHAT IS THE THREAT? 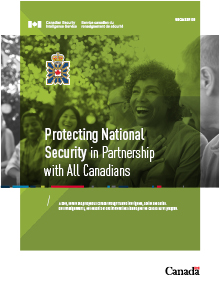 Protecting National Security in Partnership with All Canadians [PDF - 4.4 MB]

Proponents of ideologically motivated violent extremism (IMVE) are driven by a range of influences rather than a singular belief system. IMVE radicalization is more often caused by a combination of ideas and grievances resulting in a personalized worldview that is inspired by a variety of sources. IMVE includes gender-driven, xenophobic, anti-authority, and other grievance-driven violence.

Politically motivated violent extremism (PMVE) encourages the use of violence to establish new political systems, or new structures and norms within existing systems.

Religiously motivated violent extremism (RMVE) encourages the use of violence as part of a spiritual struggle against a perceived immoral system. Followers believe that salvation can only be achieved through violence.

*None of these categories are necessarily mutually exclusive, as extremist narratives often derive from the personal grievances of the individual. These classifications are derived from the definitions of violent extremism in S. 83.01 of the Canadian Criminal Code as well as S.2(c) of the CSIS Act.

HOW IS IT IMPACTING COMMUNITIES?

INDICATORS OF RADICALIZATION OR MOBILIZATION

WHAT IS THE GOVERNMENT OF CANADA DOING TO RESPOND?

WHAT IS THE CSIS ROLE?

ITAC is a federal organization responsible for assessing terrorism-related threats to Canada and Canadian interests. It is co-located with the headquarters of CSIS and operates under the provisions and authorities of the CSIS Act.

ITAC develops threat assessments at various classification levels that are based on classified and open-source information. These products are shared with both international and domestic partners, including law enforcement agencies. The assessments in turn support operational and strategic decision-making.

WHAT CAN WE DO TOGETHER?

CSIS AS A TRUSTED PARTNER

CSIS continues to take measures to improve diversity, equity and inclusion within the organization and to address systemic racism, bias and discrimination. Public disclosure of these measures and progress supports transparency, openness and accountability. CSIS is accountable to the public whose security we protect, and we are working to ensure our workforce reflects the diversity of Canada.

CSIS is committed to establishing itself as a trusted partner for Canadian communities and to building those partnerships through dialogue, mutual respect, and reciprocal action.

CSIS is not a law enforcement agency. To report an immediate threat to national security, please call 911 or your local police department.

To discuss engagement, outreach and dialogue between your community or organization and CSIS, please contact the Academic Outreach & Stakeholder Engagement program at AO-LR@smtp.gc.ca or your local regional CSIS liaison team.