Strongly moored in Quebec and Canadian naval history, the Naval Museum of Québec provides safe harbour for the stories we have inherited.

The creation of the Naval Museum of Québec is intrinsically linked to the establishment of the Pointe à Carcy Naval Complex, home to Canada’s Naval Reserve, located at the Old Port in Quebec City. When the Canadian Forces Fleet School Québec was built in the heart of the naval complex, National Defence authorities decided to use that opportunity and dedicate space in the building to Quebec’s first naval museum. In the spring of 1995, the museum opened its doors with the Right Honourable Jean Chrétien, Prime Minister of Canada, in attendance. Mr. Chrétien unveiled an official plaque dedicating the museum to Lieutenant-Commander Joseph Alexis Stanislas Déry, a veteran of World War II and the principal donor of the museum’s initial collection.

Since then, the museum’s collection has continued to expand and diversify, further shaping the institution’s mission. In 2008, the museum’s exhibition room was named the Paul Henri Bouchard Room to highlight the dedication of this veteran who fought long and hard to convince the authorities to include a naval museum in their new facility. Mr. Bouchard was also a museum volunteer for a number of years.

The Naval Museum of Québec’s mission, as endorsed in 2007 by the Chair of the Board of Directors and the Deputy Commander of Canada’s Naval Reserve, is to acquire and collect the tangible and intangible evidence of the Canadian Naval Reserve and the naval history of the St. Lawrence; to preserve and communicate this evidence to the public for research, education and enjoyment; and, through its historical research, to serve society by making it aware of the impacts of war and the value of peace. 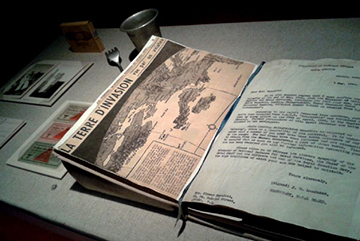