Drugs can impair your ability to drive safely and increase the risk of getting into a collision. In fact, cannabis increases your chance of a car accident Footnote 1. The percentage of Canadian drivers killed in vehicle crashes who test positive for drugs now actually exceeds the numbers who test positive for alcohol Footnote 2.

Getting behind the wheel while impaired by drugs is not only dangerous, it’s against the law. Trained police officers or Drug Recognition Experts can determine if you are under the influence of a drug and can charge you with impaired driving. You can have your license suspended, face fines, criminal charges, and even jail time.

How Cannabis affects your ability to drive

When you drive a vehicle, you need to be alert and focused. Consuming even small amounts of cannabis affects your ability to react and increases your chance of being in a crash. Drugs impair your ability to drive by:

Cannabis is not the only drug that affects your ability to drive. Other drugs, including cocaine or even prescribed drugs, such as opioids also pose a significant risk to your safety and the safety of your passengers, other drivers, cyclists, and pedestrians. Over-the-counter medications may also impair your ability to drive.

How to plan ahead

How police protect our roads from drug-impaired drivers

In addition to these tests, the new legislation permits law enforcement to use approved drug screening devices to detect the recent presence of several drugs, including any or all of THC from cannabis, cocaine and methamphetamine. Following a legal roadside stop, police can demand an oral fluid sample and/or conduct an SFST if they suspect you are driving under the influence of a drug.

How drug-impaired driving laws are enforced

Drug-impaired driving has been illegal in Canada since 1925. In addition to risking your life and the lives of others, you could face serious consequences such as having your license suspended, fines, criminal charges or even jail time if you are convicted of driving under the influence of cannabis or other drugs. There are over 14,400 trained SFST officers across Canada (April 2018) and 1,082 certified DREs (February 1, 2021). This number will continue to increase as the federal, provincial and territorial governments invest in additional training.

Young people continue to be the largest group of drivers who die in crashes and later test positive for alcohol or drugs, and yet, only 11 percent of parents surveyed said they had discussed the risks of driving under the influence with their teenagers Footnote 4. This dropped to 4 percent when teens themselves were asked whether they had discussed impaired driving with their parents.

Driving under the influence of drugs is a major contributor to fatal road crashes in Canada and young people continue to be the largest group of drivers who die in crashes and test positive for drugs.

The Government of Canada’s drug-impaired driving public awareness campaign communicates to Canadians the risks associated with driving under the influence of cannabis and other drugs. This campaign is informed by recent public opinion and qualitative research.

Public Safety Canada conducted research Footnote 5 with Canadians on drug-impaired driving in 2017. A summary of the findings shows that:

Public Safety Canada is working federal, provincial and territorial partners and with road safety advocates to help raise awareness of the dangers of driving while impaired by cannabis or other drugs including:

Canadian Association of Chiefs of Police 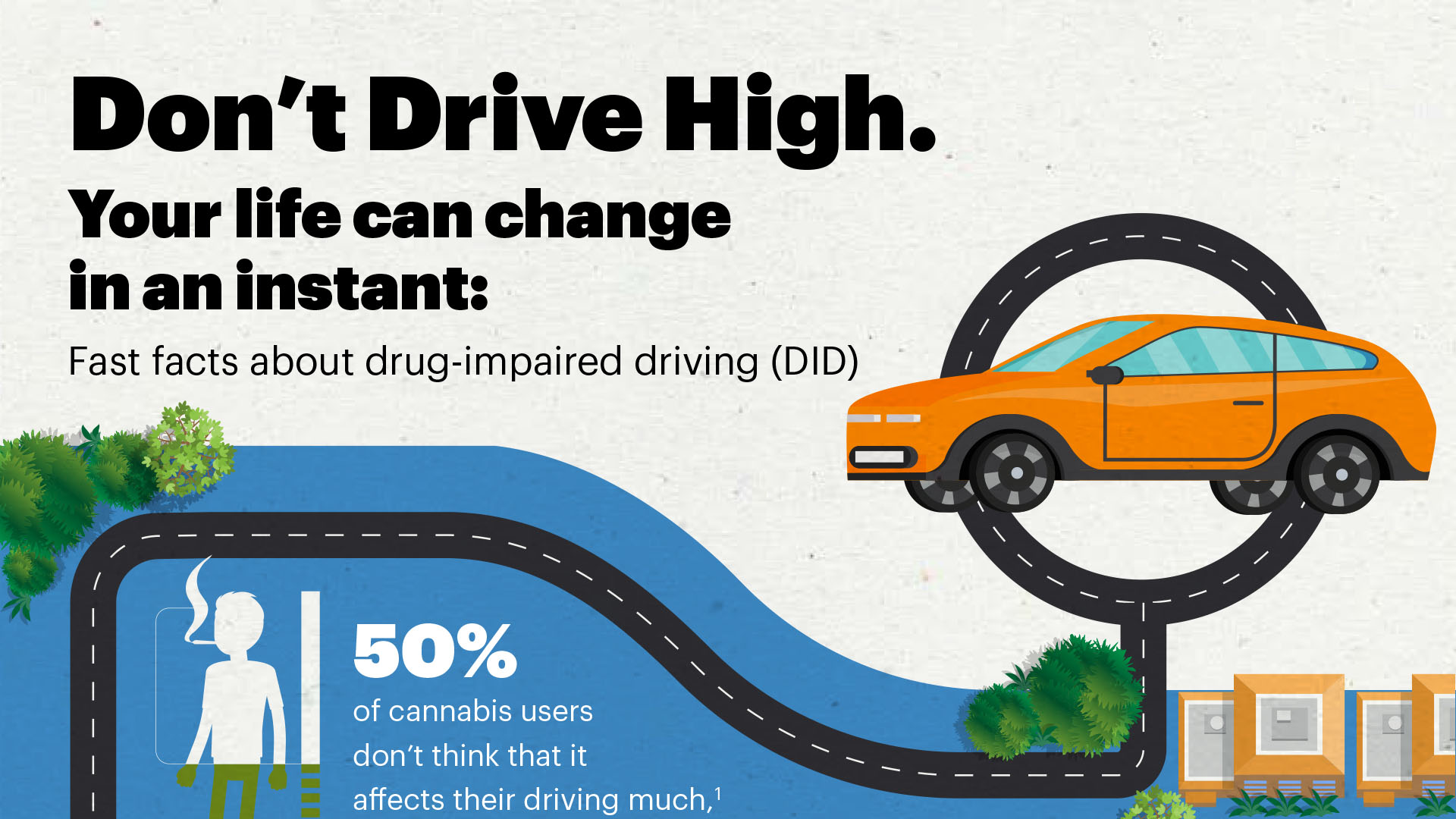 Impaired Driving in Canada, Canadian Centre on Substance Use and Addiction. https://www.ccsa.ca/sites/default/files/2019-04/CCSA-Impaired-Driving-Canada-Summary-2019-en.pdf

Clearing the Smoke on Cannabis, Cannabis Use and Driving, An Update; Canadian Centre on Substance use and Addiction: https://www.ccsa.ca/sites/default/files/2019-10/CCSA-Cannabis-Use-Driving-Report-2019-en_1.pdf