This Quarterly Financial Report should be read in conjunction with the 2016-17 Main Estimates, the 2016‑17 Supplementary Estimates (A) and the 2016‑17 Supplementary Estimates (B). This report has been prepared by management as required by Section 65.1 of the Financial Administration Act and in the form and manner prescribed by the Treasury Board Accounting Standard 1.3. It has not been subject to an external audit or review.

The Government of Canada created Shared Services Canada (SSC) in 2011 to modernize how the government manages its information technology (IT) infrastructure. SSC has brought together people, IT resources and assets to improve the efficiency, reliability and security of the government’s IT infrastructure, increase productivity across departments and agencies, and support the vision of a 21st century public service, as articulated in Blueprint 2020.

SSC reports to Parliament through the Minister of Public Services and Procurement Canada and Minister responsible for SSC. The Department is mandated to deliver email, data centre, network and workplace technology device services to departments and agencies in a consolidated and standardized manner to support the delivery of Government of Canada programs and services. SSC also provides certain optional technology services to other organizations on a cost-recovery basis.

The main legislative authorities for the Department may be found in the Shared Services Canada Act.

SSC's Program Alignment Architecture (PAA), as approved by the Treasury Board of Canada, supports the achievement of the following strategic outcome: Modern, reliable, secure and cost-effective IT infrastructure services to support government priorities and program delivery. Minor changes were made to the 2016-17 PAA, consisting of updates to sub-sub-programs and revision of titles and descriptions. In addition to supporting the achievement of SSC’s commitments to Parliament and Canadians, the 2016-17 PAA is an evergreen document that will evolve as the Department’s programs mature.

Further details on SSC’s authority, mandate, responsibilities and programs may be found in the 2016-17 Main Estimates and 2016-17 Report on Plans and Priorities.

As part of the Parliamentary business of supply, the Main Estimates must be tabled in Parliament on or before March 1 preceding the new fiscal year.

The Department uses the full accrual method of accounting to prepare and present its annual departmental financial statements, which are part of the departmental performance reporting process. However, the spending authorities voted by Parliament remain on an expenditure basis.

At the end of the third quarter of 2016-17, 93 percent of the Department’s budget was devoted to support its IT consolidation and standardization goals while ensuring that current and future IT infrastructure services offered to the Government of Canada are maintained in an environment of operational excellence. The remaining 7 percent was devoted to Internal Services which support IT infrastructure services.

Total Vote Netted Revenue authority for 2016-17 is $407.1 million, which consists of respendable revenue for IT infrastructure services provided by SSC to partner organizations and other organizations on a cost-recovery basis.

The numbers presented in the report are in accordance with the government-wide Chart of Accounts for Canada for 2016-17 and Treasury Board Accounting Standard 1.3. 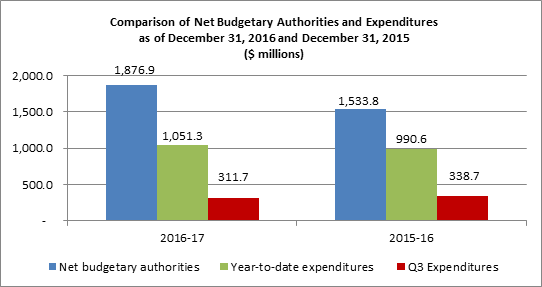 As shown on the graph, at the end of the third quarter, expenditures were incurred at a slower pace than in the previous year. SSC’s year-to-date expenditures represented 65 percent of the net authorities in 2015-16, compared to 56 percent in 2016-17. Given that SSC anticipated an increase of $343.1 million in the volume of activities in 2016-17, mitigation strategies have been implemented to maximize the use of available funds to deliver on SSC key initiatives such as: Mission Critical Information Technology Infrastructure, Cyber Security and Partner priorities.

The 2016-17 Supplementary Estimates (A) included Budget 2016 approved initiatives in the amount of $256.1 million, of which, $232.5 million for Mission Critical Information Technology Infrastructure and $23.6 million to enhance the security of network and cyber systems.

Compared to the previous year, the total year-to-date expenditures, for the period ended December 31, 2016, have increased by $60.7 million, from $990.6 million to $1,051.3 million as per the table below. This represents an increase of 6.1 percent against expenditures recorded for the same period in 2015-16.

The net increase in operating expenditures, compared to the third quarter of 2015-16, is mainly attributed to:

The net increase in capital expenditures, compared to the third quarter of 2015-16, is mainly attributed to:

The increase in the collected Vote Netted Revenues, compared to the third quarter of 2015-16, is mainly attributed to new services provided to partner departments in 2016-17 and includes:

As SSC moves forward with the operationalization of its transformation agenda, the management of internal and external risks is vital in supporting strategic and business planning, as well as the successful delivery of SSC services to partner organizations and other organizations. SSC continues to improve its enabling functions such as financial management, project management and people management, which are essential to the successful implementation of spending plans and achievement of strategic objectives.

SSC is promoting effective financial management practices and financial sustainability to ensure that it has the financial resources, systems and funding mechanisms in place to maintain mission-critical systems and fund the transformation plan. The Department is also taking steps, such as the development and implementation of a mobility framework to facilitate the realignment of resources to support transformation, to ensure a workforce with the right skills and capacity to sustain current, transitional and future business needs.

Following a comprehensive risk-based determination of activities and projects, the forecasted level of expenditures at the conclusion of the third quarter is within SSC’s reference levels. While expenditures at the end of the third quarter were incurred at a slower pace than in the previous year, SSC anticipates a significant increase in the volume of activities during the remainder of 2016-17. Mitigation strategies have been implemented to deliver those activities and maximize the use of available funds in accordance with departmental plans.

Additional risks that may impact the Department’s spending plans, as well as strategies to mitigate those risks, are described in the 2016-17 Report on Plans and Priorities.

On October 5, 2016, SSC’s Business Analytics Program was launched to focus on sourcing, storing and providing reliable data to support informed evidence-based decisions. This program will support the Government’s new results and delivery agenda by ensuring the availability of accurate enterprise data and to continually monitor departmental performance.

On October 31, 2016, Julie Hébert has joined SSC as the Director General, Communications and Organizational Effectiveness.

On October 31, 2016, Louis-Paul Normand has joined SSC as the Senior Assistant Deputy Minister of the new established Project Management and Delivery Branch.

*Includes authorities available for use and granted by Parliament at quarter-end.

* Includes authorities available for use and granted by Parliament at quarter-end, which are distributed based on historical financial data.