This quarterly financial report should be read in conjunction with the 2017-18 Main Estimates. Shared Services Canada (SSC) had no items in the 2017-18 Supplementary Estimates (A) process. This report has been prepared by management as required by Section 65.1 of the Financial Administration Act and in the form and manner prescribed by the Treasury Board. It has not been subject to an external audit or review.

SSC’s Program Alignment Architecture (PAA), as approved by the Treasury Board of Canada, supports the achievement of the following strategic outcome: Modern, reliable, secure, timely and cost-effective IT infrastructure services to support government priorities and program delivery. Significant changes were made to the 2017-18 PAA to move the sub-programs to the program level and add two new programs. Changes were also made to the titles and descriptions of the PAA items in order to make them more plain language and understandable. In 2018-19, SSC’s PAA will evolve into the Departmental Results Framework (DRF) as per the Treasury Board Policy on Results. The DRF will be a plain language document which will describe, at a high level, the domains in which SSC acts, the changes it seeks to contribute to, and how it will measure and report on its progress.

This quarterly financial report has been prepared by management using an expenditure basis of accounting. The accompanying Statement of Authorities includes the Department's spending authorities granted by Parliament, and those used by the Department consistent with the 2017-18 Main Estimates. This quarterly report has been prepared using a special purpose financial reporting framework designed to meet financial information needs with respect to the use of spending authorities.

The Department uses the full accrual method of accounting to prepare and present its annual departmental financial statements that are part of the departmental results reporting process. However, the spending authorities voted by Parliament remain on an expenditure basis.

At the end of the second quarter of 2017-18, 93 percent of the Department’s budget was devoted to support its IT consolidation and standardization goals while ensuring that current and future IT infrastructure services offered to the Government of Canada are maintained in an environment of operational excellence. The remaining 7 percent was devoted to Internal Services which support services provided by SSC.

Total Vote Netted Revenue authority for 2017-18 is $407.1 million, which consists of respendable revenue for IT infrastructure services provided by SSC to partner organizations and other organizations on a cost-recovery basis. 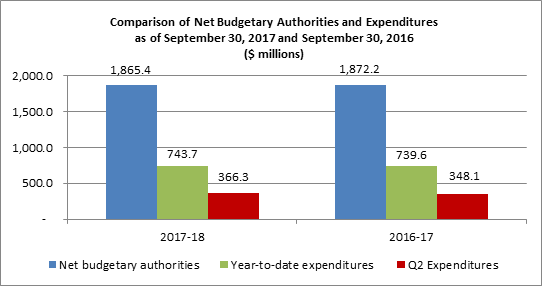 For the period ended September 30, 2017, the authorities provided to the Department include the Main Estimates and the Budget Carry Forward from 2016-17. Authorities available for spending in 2017-18 were $1,865.4 million at the end of the second quarter, compared to $1,872.2 million at the end of the second quarter of 2016-17, representing a decrease of $6.8 million, or 0.4 percent. This total decrease is a combination of an increase of $5.4 million in Vote 1 - Operating Expenditures, a decrease of $3.9 million in Vote 5 - Capital Expenditures and a decrease in Budgetary Statutory Authorities of $8.3 million.

SSC received additional authorities approved in Budget 2016 for the following initiatives: Refresh of the Mission Critical Infrastructure Technology and Secure Canada’s Government IT Infrastructure and Information. The bulk of these authorities was received in 2016-17 and the remainder in 2017-18.

Compared to the previous year, the total year-to-date expenditures, for the period ended September 30, 2017, have increased by $4.1 million, from $739.6 million to $743.7 million as per the table below. This represents an increase of 0.6 percent against expenditures recorded for the same period in 2016-17.

The net increase in operating expenditures, compared to the second quarter of 2016-17, is mainly attributed to:

The net decrease in capital expenditures, compared to the second quarter of 2016-17, is mainly attributed to:

The increase in the collected Vote Netted Revenues, compared to the second quarter of 2016-17, is due to earlier billing in 2017-18 for services provided by SSC to partner departments that are funded through annual transfers instead of a one-time transfer when SSC was created.

On August 24, 2017, the Honourable Judy M. Foote announced her resignation as Minister of Public Services and Procurement Canada and Minister responsible for SSC.

On August 28, 2017, the Prime Minister Justin Trudeau appointed the Honourable Carla Qualtrough as Minister of Public Services and Procurement Canada and Minister responsible for SSC.

Includes only authorities available for use and granted by Parliament at quarter-end.

Includes only authorities available for use and granted by Parliament at quarter-end, which are distributed based on historical financial data.