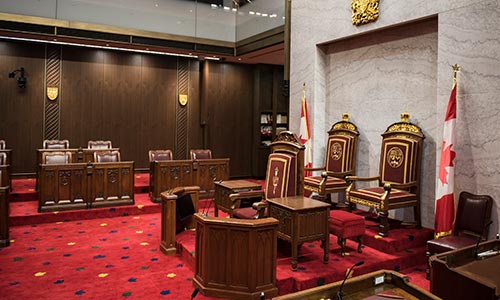 Mary Simon has attained national and international recognition for her work on Arctic and Indigenous issues and as an advocate for Inuit rights and culture.

Born in Kangiqsualujjuaq, Nunavik (Quebec), Ms. Simon began her career as a radio broadcaster with the CBC Northern Service (now CBC North) in the 1970s. Following this, she held a series of executive positions with the Northern Quebec Inuit Association and Inuit Tapiriit Kanatami, centred on negotiating the first land claims agreement in Canada. As President of Makivik Corporation, she was directly involved with the implementation of the James Bay and Northern Quebec Agreement, and with the protection and promotion of Inuit rights under that agreement.

Along with fellow Indigenous leaders, she was actively involved in the negotiations leading to the 1982 patriation of the Canadian Constitution, which formally entrenched Aboriginal and treaty rights in the supreme law of Canada.

From 1994 to 2003, Ms. Simon served as Ambassador for Circumpolar Affairs, becoming the first Inuk to hold an ambassadorial position. During this time, she negotiated the creation of the Arctic Council. Concurrently, she served as Ambassador of Canada to the Kingdom of Denmark from 1999 to 2001.

Beginning in 2006, Ms. Simon served two terms as the President of Inuit Tapiriit Kanatami. In 2008, in the House of Commons, she delivered a response on behalf of Inuit to the formal apology on residential schools. She is the founder of the Arctic Children and Youth Foundation and, until 2014, she was the Chairperson of the National Committee on Inuit Education.

In 2017, as the Minister’s Special Representative, Ms. Simon delivered a report to the Minister of Indigenous and Northern Affairs on A new Shared Arctic Leadership Model, setting the stage for important policy and program development in support of the Arctic and its residents.

Among other distinctions, Ms. Simon is an Officer of the Order of Canada, and an Officer of the Ordre national du Québec. She is also a recipient of the Governor General's Northern Medal, the Gold Order of Greenland, the National Aboriginal Achievement Award, the Gold Medal of the Canadian Geographical Society, and the Symons Medal.