Her Majesty and Canada

The Queen and the people of Canada 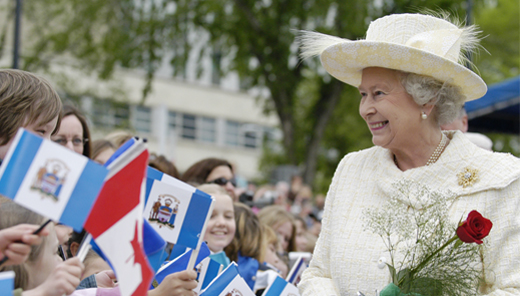 Princess Elizabeth and Prince Philip visited Canada for the first time in 1951, as part of a 5-week cross-country tour. Viewed as the couple that would bring a more youthful approach to the monarchy, they immediately piqued the interest of Canadians.

Their coast-to-coast visit was the start of a long, affectionate relationship between Canadians and Her Majesty, who remarked:

I am sure that nowhere under the sun could one find a land more full of hope, of happiness and of fine, loyal, generous-hearted people. […] They have placed in our hearts a love for their country and its people which will never grow cold and which will always draw us to their shores.

This first visit would be followed by 22 official visits by Queen Elizabeth II, making Canada the country most frequently visited by Her Majesty. As part of a conscious effort to see all provinces and territories, the Queen developed an extensive knowledge of Canada and an appreciation for its diverse peoples. She frequently described Canada as her home. In a visit to Halifax in June 2010, she reflected:

Canadians have, by their own endeavours, built a country and society which is widely admired across the world. I am fortunate to have been a witness to many of the developments and accomplishments of modern Canada. As Queen of Canada for nearly six decades, my pride in this country remains undimmed. Thank you again for your welcome. It is very good to be home.

The Queen and Indigenous Peoples in Canada 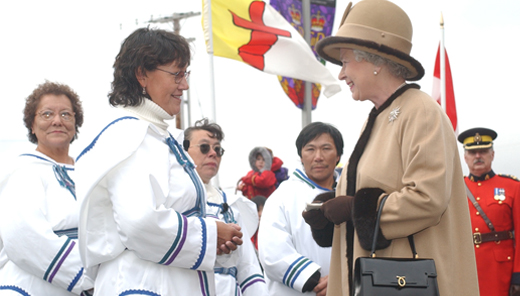 For example, Chief Joe Mathias from the Squamish Nation attended Her Majesty's coronation in London as a Canadian dignitary. During her first visit to Canada as Queen in 1959, she visited many Indigenous communities across the country, including a visit to the Salish People, who granted her the title “Mother of All People” as a testimony of their strong relationship.

During each Royal Tour, Her Majesty made it a point to meet with Indigenous leaders and attend Indigenous cultural events, thereby acknowledging the foundational place of Indigenous Peoples in the life, culture and government of Canada.

In 2002, the Queen made her first visit to the new territory of Nunavut. She gave a speech at the legislative assembly and dedicated the building. She ended her speech with a few words in Inuktitut, a noted effort that was then perceived as a sign of respect. Her visit also included the naming of a street in her honour, the Queen Elizabeth II Way.

This stone was taken from the grounds of Balmoral Castle in the Highlands of Scotland — a place dear to my great great grandmother, Queen Victoria. It symbolises the foundation of the rights of First Nations Peoples reflected in treaties signed with the Crown during her reign. Bearing the Royal Cypher of Queen Victoria as well as my own, this stone is presented to the First Nations University of Canada in the hope that it will serve as a reminder of the special relationship between the Sovereign and all First Nations Peoples. 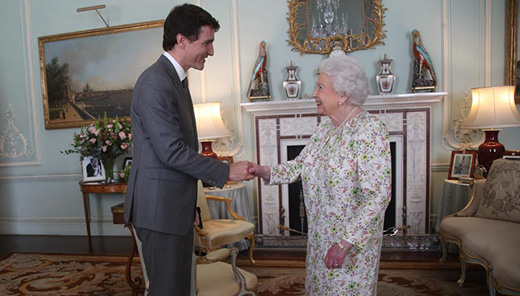 From the time of her accession to the Throne in 1952, Her Majesty Queen Elizabeth II has known many Canadian prime ministers and governors general and all have expressed their appreciation for the Sovereign.

Throughout her reign, Her Majesty has maintained cordial relationships with all prime ministers. Some with longer tenures had the time and opportunity to develop a friendly relationship with the Queen. Some were also awarded prestigious honours including the Order of Merit, which she presented to the Right Honourable Lester B. Pearson (1971) and the Right Honourable Jean Chrétien (2009).

Governors general and lieutenant governors, Her Majesty's viceregal representatives in Canada, have witnessed the Sovereign's deep knowledge of history, acumen and sense of duty.

Elizabeth II has been steadfast in her commitment to this country and has executed her duties as Queen with a dignity, wisdom and dedication that is a model of service to all Canadians. 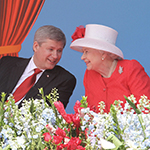 She’s got a massive breadth of history, a huge insight into the world. 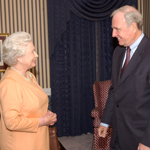 […] Canadians have been inspired by your abiding grace and dignity, by the dedication to ideals and duty that have so personified your life, and by your never faltering commitment to others. 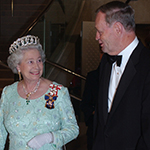 Her Majesty proved to be among the wisest persons I was destined to encounter in public life. Considering that she began her reign with Sir Winston Churchill as her prime minister, this should surprise no one. I was able to draw upon this experience when I sought her advice in the years that lay ahead, and I remain grateful to this day for the thoughtful counsel she provided. 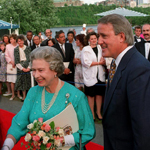 You never leave a discussion with her without feeling a little bit wiser yourself about the world […] because she’s seen a lot of history, more history, from a kind of first hand encounter than anybody living at the present time.

The connection between Her Majesty and Canadians is enduring and deeply rooted. Her genuine affection for our country and our people extends beyond her role as Sovereign. Canadians recognize this heartfelt kinship and have reciprocated with great fondness and admiration. 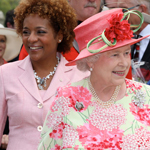 She exudes intelligence, intensity, and shrewd appraisal, which are dissimulated behind a flashing and often disarming smile. Spending any length of time with her makes one realize that she is the consummate professional who knows exactly what she is doing. 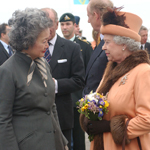 Throughout the entire world, no one else has stayed at the head of a democracy as long [as she has]. And, like the Queen, the United Kingdom remains a global symbol of courtesy and rule of law.

The Queen and the Canadian Armed Forces 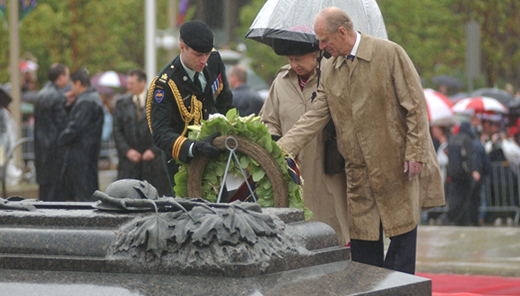 In 1945, Princess Elizabeth joined the Auxiliary Territorial Service, the women’s branch of the British Army, and became the first female member of the Royal Family to actively serve in the military.

Her Majesty consistently worked to highlight the critical role of the CAF by visiting many ships and military bases across the country, presiding over military ceremonies, including inspection of the troops, presentation of colours, laying wreaths at commemorative sites, attending military commemorative ceremonies and meeting with veterans.

She was remarkably dedicated in her role as the Commander-in-Chief of Canada’s military and as Captain General, Colonel-in-Chief and Air Commodore-in-Chief of many Canadian units and branches:

In addition to Her Majesty’s honourary appointments, the CAF highlights the Crown’s prominent position by using the designation Her Majesty’s Canadian Ship (HMCS) as a prefix to the names of all Canadian military ships. Furthermore, numerous Canadian units have been bestowed the “Royal” designation in their names. Some rank insignia of the CAF feature the Royal Crown, a strong symbolic link to the Canadian Crown.

The Queen and the Royal Canadian Mounted Police 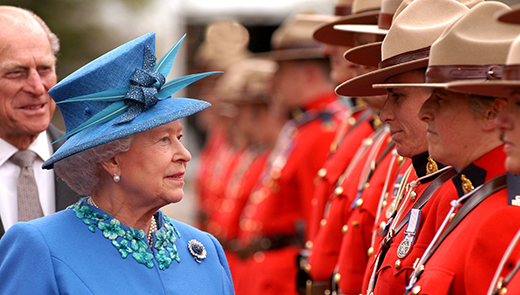 The Royal Canadian Mounted Police (RCMP) is recognized around the world for its mounted officers and Musical Ride. As the Queen was well known for being a horse enthusiast and a skilled breeder and rider, it is no surprise that over time she developed a unique relationship with the RCMP.

The Queen first encountered the RCMP as an 11-year-old princess, during the coronation of her father, King George VI.

In 1953, for the coronation parade of the new Queen, the RCMP sent a contingent of 46 riders and horses to London. That same year, Her Majesty was appointed Honorary Commissioner of the RCMP. These events gave rise to a relationship that continued to grow throughout her life.

In 1969, Police Service Horse Burmese was offered to the Queen. Forever one of her most beloved horses, Burmese accompanied Her Majesty on 18 Trooping the Colour parades, from 1969 to 1986. In 1981, Her Majesty was riding Burmese on her Birthday Parade when gun shots were fired in the crowd. The horse remained calm and was praised by the Royal Family for its behaviour. Over time, other horses were offered to the Queen.

In 2012, to celebrate the Queen’s Diamond Jubilee, the Queen was appointed Commissioner in Chief of the RCMP, an appointment that prompted a special request directly from the Queen for Mounties to replace her Queen’s Life Guard at Buckingham Palace for 24 hours. This was a great honour and prestigious task, one that had been carried out by the British military since the 17th century. This was the first time that the Queen was guarded by a non-British, non-military force. 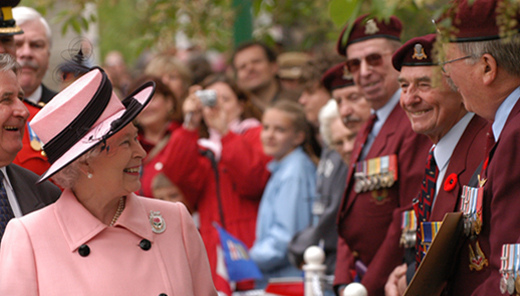 Her Majesty Queen Elizabeth II will be remembered as a sovereign committed to duty and service. Her continued dedication and support highlighted charities throughout the Commonwealth. As sponsor for over 600 organizations, including 36 in Canada, she was one of the world's top benefactors.

The Queen supported organizations that reflected her own varied interests, such as education, health, professional institutions, children, science, the environment, arts, community work, military services and animal welfare. Receiving Her Majesty’s patronage provided an organization with increased visibility and recognition.

In addition to the 17 Canadian military units and the Royal Canadian Mounted Police, the following Canadian organizations benefited from the royal patronage of Queen Elizabeth II:

Key moments in our history

Over the course of a reign that spanned more than 7 decades, Queen Elizabeth II witnessed and participated in Canada’s growth and development. Her presence at key moments in our history clearly demonstrated her dedication and personal commitment as Queen of Canada.

In 1957, Her Majesty became the first Canadian monarch to open Parliament and deliver a Speech from the Throne. She attended the opening of the St. Lawrence Seaway in 1959 as well as the 100th anniversary of the meeting of the Fathers of Confederation in Charlottetown in 1964 and the Canadian Centennial celebrations in Ottawa in 1967. Her Majesty also participated in the patriation ceremony of the Constitution and proclaimed Canada’s new Constitution Act, which included the Canadian Charter of Rights and Freedom, in 1982.

Many other visits only deepened the affection of Her Majesty for the people of Canada. These visits included the following:

The Queen was active in Canadian affairs, from conferring honours to sending congratulatory letters and messages to thousands of Canadians over the course of her reign. Some of the other more notable moments include: