Using Environment and Climate Change Canada's (ECCC) radar data can be quite beneficial when making weather sensitive decisions. To assist users, a comprehensive table of contents, detailing radar information is listed below.

The term RADAR, which has been in use since the 1940’s, is an acronym formed from the term Radio Detection and Ranging.

ECCC's network is concentrated in the most populated parts of Canada, providing radar coverage to more than 95 per cent of Canadians. The network’s primary purpose is the early detection of developing thunderstorms and high impact weather, as well the tracking of precipitation.

ECCC's weather radars have a detection maximum range of 250 km around each C-Band site for reflectivity (identified by 3-letters site ID on our individual images; for example “XFT”, for the Franktown radar, near the national capital Ottawa) and 240 km for each new S-Band radar (identified by 5-letters site ID on our individual images; “CASBV” example for the Blainville radar near Montreal). As for the Doppler velocity, range is 120 km for C-Band radars and 240 km for S-Band radars. Most of the radars have now been replaced and it should be noted that by 2023, all C-band radars will be replaced by new S-band radars (more details here: RADAR replacement schedule). The Doppler data is used to detect severe weather such as tornadoes. Historical radar images are available at the National Climate Data and Information Archive.

The “How to Use” tab provides more information on how to view the images.

Weather surveillance radar systems generally use a parabolic antenna (the dish type of antenna you might have at home) to focus a pulsed radio-frequency beam out into the atmosphere, a lot like a searchlight. It is important to note that radars “listen” far more than they “speak”. Radars send an incredibly brief pulse, and then listen for echoes to return. These echoes are then recorded by the very sensitive “listening” receivers. During this listening period, the radar cannot emit other pulses because it would damage the receivers, so our radars spend most of their time “listening” and generating no radio frequency energy. This narrow beam sweeps the sky for 360 degrees around the radar site, pointing at different elevation angles each time it sweeps around. ECCC's operational scan strategy for the C-band radars consists of 24 slices (also called elevation angles) which are acquired sequentially in descending order (top to bottom) while for the new S-band radars, 17 slices are acquired sequentially and always from top to bottom.

When the energy emitted by the radar antenna strikes particles of precipitation, such as drops of water, snowflakes, ice pellets, or hail, a portion of that energy is reflected back to the radar. The intensity of this energy is related to the number, size and type of the precipitation particles.

There are three views of radar images that can be seen on the Canadian Historical Weather Radar website:

This view provides at a glance, a complex, low-resolution picture of where precipitation is occurring within the complete ECCC's radar network.

The picture is interactive, and can be used to choose the geographical area you are interested in. Clicking on a province will lead you to a Regional View for that area.

From this national picture, you can refine it to view local radar data for a specific geographic region. This can be done by selecting an area near one of the black dots which represent local radar sites. 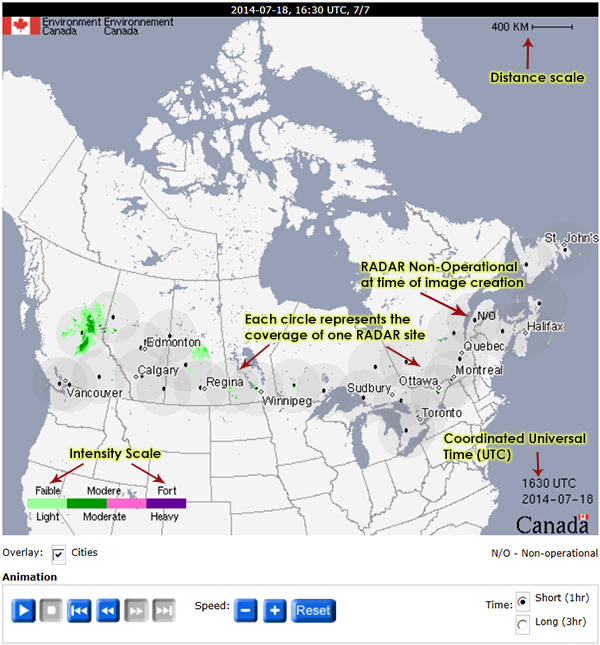 This view gives you a higher resolution look at precipitation patterns. The picture is interactive, and can be used to select a more specific area. You can view the actual radar data for a specific geographic region, by selecting an area near one of the black dots representing local radar sites. 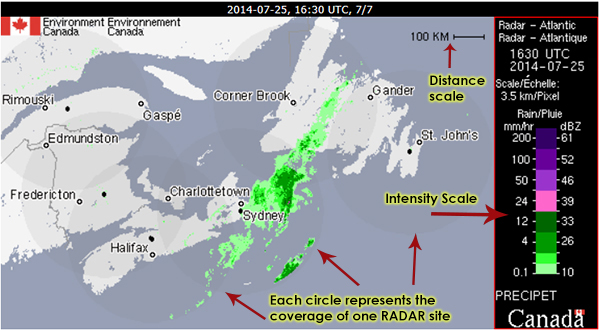 This is your local view of precipitation detected within the coverage of the local radar site. 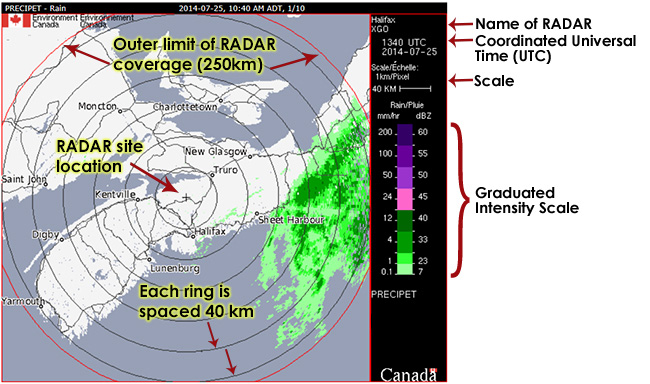 What am I looking at? (Radar Echoes)

When you look at a radar image, you are looking at a picture of precipitation distribution (called “echoes”) and its intensity.

Radar echoes are represented by a series of coloured pixels, as illustrated on the scale to the right of the radar image. The intensity scale on the right represents what is called “reflectivity in dBZ” (unit of reflectivity), and the scale on the left is the corresponding rate of fall which is an interpretation of how light or heavy the precipitation is. In the winter season, this reflectivity is linked to the snowfall rate in centimetres per hour (cm/hr), and in the summer months, the reflectivity is linked to the rainfall rate in millimeters per hour (mm/hr).

A good rule of thumb:

The higher the reflectivity value on a radar image, the heavier the precipitation rate that is being detected.

In some cases, the radar does not distinguish between real echoes (precipitation) and non-meteorological echoes (trees, hills, tall buildings). It is also important to understand some common interpretation errors, if you are hoping to accurately interpret the radar images.

What is a PRECIP-ET Product?

First, let’s mention that the type of image you are viewing is indicated at the bottom right-hand legend. The standard radar product Environment and Climate Change Canada now presents on its website is called a "PRECIP-ET" (PRECIPitation-ExTended) product replacing the previous PRECIP product (see explanation in the next section).

The PRECIP-ET (PRECIPET on images) is an extension of the PRECIP product (hence the use of ET in the product name). Compared to the previous PRECIP product, the PRECIP-ET performs a suite of additional quality control (QC) tests and tracks issues better. For example, Doppler filters might be rejecting moderate ground echoes in a particular area and thus weak meteorological echoes would not be detectible. In this case, PRECIP-ET would flag the missing data area, whereas PRECIP would simply treat the area as no echoes.  This additional quality treatment is why we have migrated to PRECIP-ET in 2013, to get an improved service.

The PRECIP-ET image is designed to show the precipitation close to the ground, by using Doppler technology processing for echoes within 128 km from the radar site for the C-Band radars and 240 km for the new S-Band radars. Doppler technology allows for better resolution of the precipitation echoes and also provides the ability to detect the movement of precipitation in relation to the radar (i.e. are the raindrops or snowflakes moving towards or away from the radar and at what speed). Beyond this 128 km limit, the echoes are displayed using the more conventional CAPPI processing which is explained below.

Three factors distinguish the PRECIP-ET product from the old conventional PRECIP one (available in our radar archiving images before 2013):

What is a CAPPI Radar Product?

Due to the curvature of the Earth, the height of a radar beam, in relation to the ground, increases as it travels further from the radar. When the radar is pointed down near the ground (a low elevation angle), the beam starts off near the ground but then its height above the ground slowly increases. By the time that same beam is 200 km from the radar, it is at a height of around 4 km above the ground. In order to get a better sense of what is happening at one approximate height above the ground (i.e. 1.5 km), a whole series of radar beams with different elevation angles (low, medium, high) are used to create one radar product. This type of radar product is called a CAPPI (Constant Altitude Plan Position Indicator). Since the CAPPI products do not use Doppler processing to filter out clutter like tall trees, hills and buildings, it can sometimes be contaminated by non meteorological echoes.

A picture may be worth a thousand words, but sometimes what you see isn't necessarily what you get. Just because something looks colourful on the radar screen doesn't mean there's rain or snow. Similarly, just because the echoes on the screen appear weak or don't appear at all, doesn't mean there isn't significant precipitation falling somewhere.

Here are some of the more common radar interpretation mistakes: 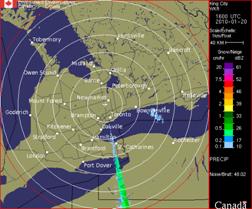