The original version was signed by
The Honourable Jody Wilson-Raybould, P.C., M.P.
Minister of Justice and Attorney General of Canada 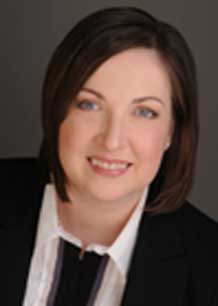 I am very pleased to present the first Departmental Performance Report for the Administrative Tribunals Support Service of Canada (ATSSC).

The creation of the ATSSC is consistent with the government's ongoing commitment to improve the effectiveness and efficiency of its administration and operations. By consolidating the provision of support services for 11 administrative tribunals, the government is strengthening overall capacity and modernizing operations to better meet the administrative needs of federal tribunals and to improve access to justice for Canadians.

This report outlines the ATSSC’s key accomplishments from its creation on November 1, 2014 to March 31, 2015. During that period, the ATSSC focused on developing and implementing management practices and controls by identifying and establishing governance structures, increasing the use of common processes and systems, standardizing internal service processes, where feasible, adopting new technologies, and making better use of facilities. Draft operational and strategic plans have been developed and once final, will guide the new organization as it continues to evolve.

Working collaboratively with the tribunals it serves, the ATSSC endeavoured to ensure that new working relationships, systems and processes were built and implemented with minimal disruption to the tribunals and Canadians. The independence of the tribunals on adjudicative and other substantive matters remained safeguarded.

For ease of reference, the 2014-15 Departmental Performance Reports of the tribunals supported by the ATSSC are annexed to this report.

I would like to express my sincere appreciation to ATSSC employees and to the tribunal chairpersons and members for the professionalism and collaborative spirit demonstrated on a daily basis. Our collective achievements have contributed to improving access to justice for Canadians, while establishing a solid foundation for the ATSSC to build upon for its success in the future.

The ATSSC is responsible for the provision of the support services and the facilities that are needed by each of the administrative tribunals it serves to exercise powers and perform duties and functions in accordance with their legislation and rules.

The ATSSC was established with the coming into force on November 1, 2014, of the Administrative Tribunals Support Service of Canada Act. The ATSSC is responsible for providing support services and facilities to 11 federal administrative tribunals Footnote 1 by way of a single, integrated organization.

Note that as the ATSSC came into force on November 1, 2014, figures for the period 2012-14 in the tables below do not exist. In addition, figures related to the 2014-15 Main Estimates and 2014-15 Planned Spending do not exist as the ATSSC was created after these processes were finalized.

Alignment of Spending With the Whole-of-Government Framework 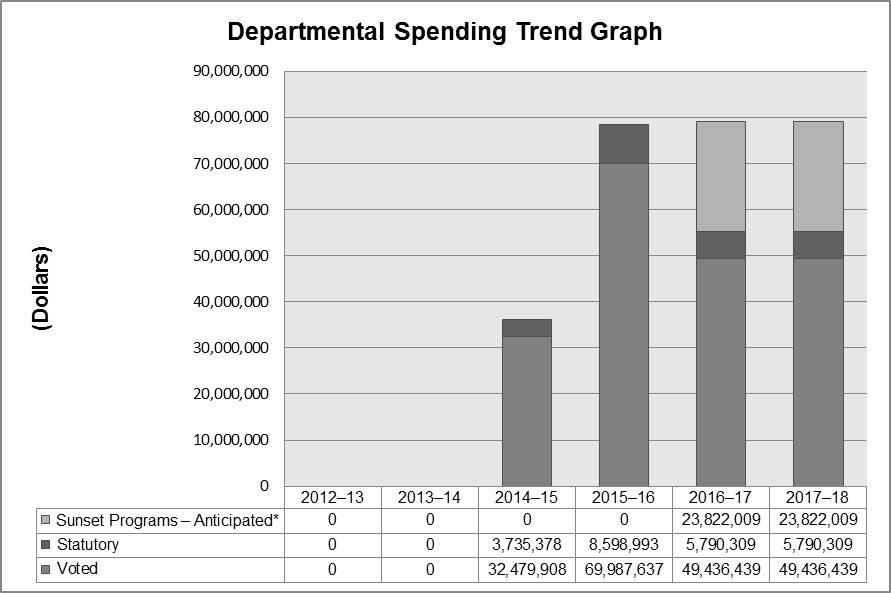 * The ATSSC will work with central agencies to renew funding totaling $23.8M that is set to sunset in 2016–17 and that is used to support the operations of the Social Security Tribunal and the Specific Claims Tribunal.

For information on the ATSSC’s organizational appropriations, consult the Public Accounts of Canada 2015, which is available on the Public Works and Government Services Canada website.

Efficient and effective services which support tribunal chairs and members in exercising their statutory responsibilities and ensure that their independence is protected in a manner which promotes Canadians' confidence in the federal tribunal system.

The Tribunal Specialized and Expert Support Services Program provides expert research, analysis, drafting support and advice as well as other support services including investigation and mediation to assist Tribunals in the discharge of their statutory responsibilities. These services are provided by ATSSC employees such as legal counsel, sectoral experts, tribunal assistants and research personnel.

The Registry Services Program provides registry services in support of tribunals. The Program works closely with tribunal chairs and members to ensure that matters before the Tribunals are heard and disposed of in a timely, fair, impartial and efficient manner and within statutory obligations. Services provided include: processing tribunal documents; maintaining and safeguarding tribunal records; providing information to the public regarding tribunal procedures; assisting in the scheduling and conduct of tribunal hearings and assisting in communicating tribunal decisions to the parties and the public. The Registry Services Program is also responsible for developing and monitoring service standards, assessing the performance of registry functions and implementing required improvements.

The program administers appropriations with respect to tribunal chairs' and members' salaries and other compensation pursuant to the terms of tribunals' enacting legislation and Governor-in-Council appointments.

The supplementary information tables listed is available on the ATSSC’s website.

The tax system can be used to achieve public policy objectives through the application of special measures such as low tax rates, exemptions, deductions, deferrals and credits. The Department of Finance Canada publishes cost estimates and projections for these measures annually in the Tax Expenditures and Evaluations publication. The tax measures presented in the Tax Expenditures and Evaluations publication are the responsibility of the Minister of Finance.

The Administrative Tribunals Support Service of Canada Act deemed all financial and human resources of the 11 tribunals to the ATSSC as of November 1, 2014 when the ATSSC came into force.

The tribunals supported by the ATSSC have prepared their final DPRs to address their performance against the measures in their respective 2014–15 Reports on Plans and Priorities for the period April 1, 2014 to October 31, 2014. Those reports are also available on the tribunal websites.

appropriation (crédit): Any authority of Parliament to pay money out of the Consolidated Revenue Fund.

Departmental Performance Report (rapport ministériel sur le rendement): Reports on an appropriated organization’s actual accomplishments against the plans, priorities and expected results set out in the corresponding Report on Plans and Priorities. These reports are tabled in Parliament in the fall.

Management, Resources and Results Structure (Structure de la gestion, des ressources et des résultats): A comprehensive framework that consists of an organization’s inventory of programs, resources, results, performance indicators and governance information. Programs and results are depicted in their hierarchical relationship to each other and to the Strategic Outcome(s) to which they contribute. The Management, Resources and Results Structure is developed from the Program Alignment Architecture.

Non-budgetary expenditures (dépenses non budgétaires): Includes net outlays and receipts related to loans, investments and advances, which change the composition of the financial assets of the Government of Canada.

Performance (rendement): What an organization did with its resources to achieve its results, how well those results compare to what the organization intended to achieve and how well lessons learned have been identified.

Performance indicator (indicateur de rendement): A qualitative or quantitative means of measuring an output or outcome, with the intention of gauging the performance of an organization, program, policy or initiative respecting expected results.

Planned spending (dépenses prévues): For Reports on Plans and Priorities (RPPs) and Departmental Performance Reports (DPRs), planned spending refers to those amounts that receive Treasury Board approval by February 1. Therefore, planned spending may include amounts incremental to planned expenditures presented in the Main Estimates.

A department is expected to be aware of the authorities that it has sought and received. The determination of planned spending is a departmental responsibility, and departments must be able to defend the expenditure and accrual numbers presented in their RPPs and DPRs.

Plan (plan): The articulation of strategic choices, which provides information on how an organization intends to achieve its priorities and associated results. Generally a plan will explain the logic behind the strategies chosen and tend to focus on actions that lead up to the expected result.

Priorities (priorité): Plans or projects that an organization has chosen to focus and report on during the planning period. Priorities represent the things that are most important or what must be done first to support the achievement of the desired Strategic Outcome(s).

Program (programme): A group of related resource inputs and activities that are managed to meet specific needs and to achieve intended results and that are treated as a budgetary unit.

Program Alignment Architecture (architecture d’alignement des programmes): A structured inventory of an organization’s programs depicting the hierarchical relationship between programs and the Strategic Outcome(s) to which they contribute.

Report on Plans and Priorities (rapport sur les plans et les priorités): Provides information on the plans and expected performance of appropriated organizations over a three-year period. These reports are tabled in Parliament each spring.

Statutory expenditures (dépenses législatives): Expenditures that Parliament has approved through legislation other than appropriation acts. The legislation sets out the purpose of the expenditures and the terms and conditions under which they may be made.

Strategic Outcome (résultat stratégique): A long-term and enduring benefit to Canadians that is linked to the organization’s mandate, vision and core functions.

Sunset program (programme temporisé): A time-limited program that does not have an ongoing funding and policy authority. When the program is set to expire, a decision must be made whether to continue the program. In the case of a renewal, the decision specifies the scope, funding level and duration.

Target (cible): A measurable performance or success level that an organization, program or initiative plans to achieve within a specified time period. Targets can be either quantitative or qualitative.

Voted expenditures (dépenses votées): Expenditures that Parliament approves annually through an Appropriation Act. The Vote wording becomes the governing conditions under which these expenditures may be made.

Planned spending for future years includes an estimated $18M associated with the ATSSC net vote authority to cover costs incurred on behalf of the Canada Pension Plan and Employment Insurance funds. The reduction in planned spending for 2016–17 takes into account the possible sunsetting of programs supported by the ATSSC. Total authorities available for use and actual spending amounts for 2014–15 exclude $9,477,811 of revenues netted against expenditures.