This quarterly financial report has been prepared as required by section 65.1 of the Financial Administration Act and in the form and manner prescribed by the Treasury Board. This report should be read in conjunction with the 2017-18 Main Estimates and Supplementary Estimates (A). This quarterly report has not been subject to an external audit or review. 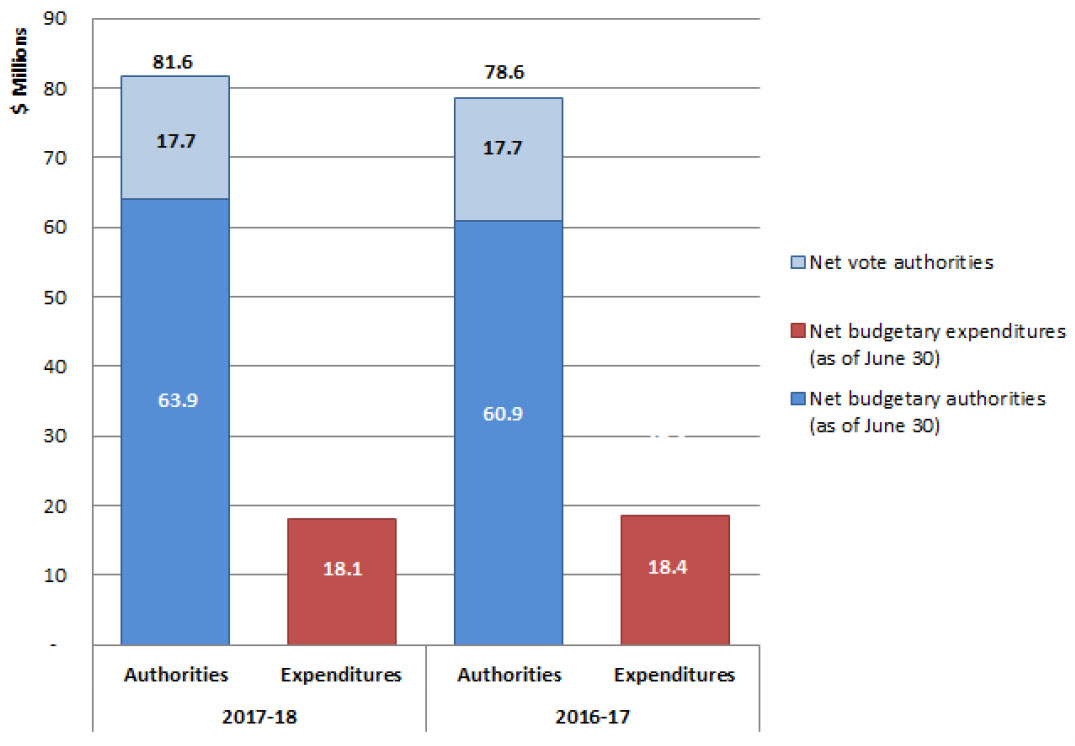 The ATSSC expended $18.1 million (22% of total authorities) in the first quarter of 2017-18. The majority of expenditures relate to personnel, which totaled $15.8 million (87% of gross expenditures). The remaining 13% primarily comprises of rentals (mainly software licenses), professional and special services (mainly consulting services and translation costs) and transportation and communications (mainly travel costs).

As of June 30, 2017, the total budgetary authorities available for use for the year increased from $60.9 million in 2016-17 to $63.9 million in 2017-18. This increase is mainly due to the reprofiling of funding from 2015-16 over and above the operating budget carry-forward that will serve towards office space consolidation and modernization as well as a reduction of the ATSSC’s statutory authority to cover the expenditures related to Employee Benefit Plans.

First quarter gross budgetary expenditures decreased slightly from $18.4 million in 2016-17 to $18.1 million in 2017-18. The distribution of expenditures by Standard Object for the first quarter of 2017-18, as per the Departmental Expenditures by Standard Object table below, saw an important decrease in “Other subsidies and payments,” which in previous years accounted for advance payments issued to Employment and Social Development Canada (ESDC) for the administration of the Social Security Tribunal. As of April 1, 2017 advance payments are no longer issued as the ATSSC has assumed all financial management and procurement responsibilities for the SST.

The ATSSC has identified three key risks and responses for 2017-18.