This quarterly financial report has been prepared by management as required by section 65.1 of the Financial Administration Act and in the form and manner prescribed by the Treasury Board. It should be read in conjunction with the 2015-16 Main Estimates. The Administrative Tribunals Support Service of Canada (ATSSC) had no items in the 2015-16 Supplementary Estimates (A) process. The report has not been subject to an external audit or review.

The ATSSC is responsible for providing support services and facilities to 11 federal administrative tribunals by way of a single, integrated organization.

These services include the specialized services required by each tribunal (e.g., registry, research and analysis, legal and other case-specific work), as well as corporate services (e.g., human resources, financial services, information technology, accommodations, security and communications).

Established on November 1, 2014, the ATSSC is consistent with the government’s ongoing commitment to improve the effectiveness and efficiency of its administration and operations. By consolidating the provision of support services for eleven administrative tribunals, the government is strengthening overall capacity and modernizing operations to better meet the administrative needs of federal tribunals and to improve access to justice for Canadians.

This quarterly report has been prepared using an expenditure basis of accounting. The accompanying Statement of Authorities includes the department's spending authorities granted by Parliament and those used by the department consistent with the Main Estimates for the 2015-16 fiscal year. This quarterly report has been prepared using a special purpose financial reporting framework designed to meet financial information needs with respect to the use of spending authorities.

As the ATSSC was established on November 1, 2014, there were no authorities or expenditures in the first two quarters of the previous fiscal year (2014-15); therefore, no variances can be reported from the results of that fiscal year.

For the period ending September 30, 2015, the ATSSC had total authorities of $81.0 million, including budgetary authorities of $63.3 million and vote-netted revenue (VNR) of $17.7 million. Budgetary authorities of $60.9 million from the Main Estimates and $2.5 million from Treasury Board Central Votes (Operating Budget Carry Forward) are partially offset by a reduction of $0.1 million for the department’s contribution to support Government of Canada back-office transformation initiatives. The VNR gives the department the authority to make recoverable expenditures on behalf of the Canada Pension Plan and the Employment Insurance Operating Account. Presented in Chart 1 below are the gross and net budgetary authorities and expenditures for the second quarter of 2015-16. For more details, refer to the Statement of Authorities. 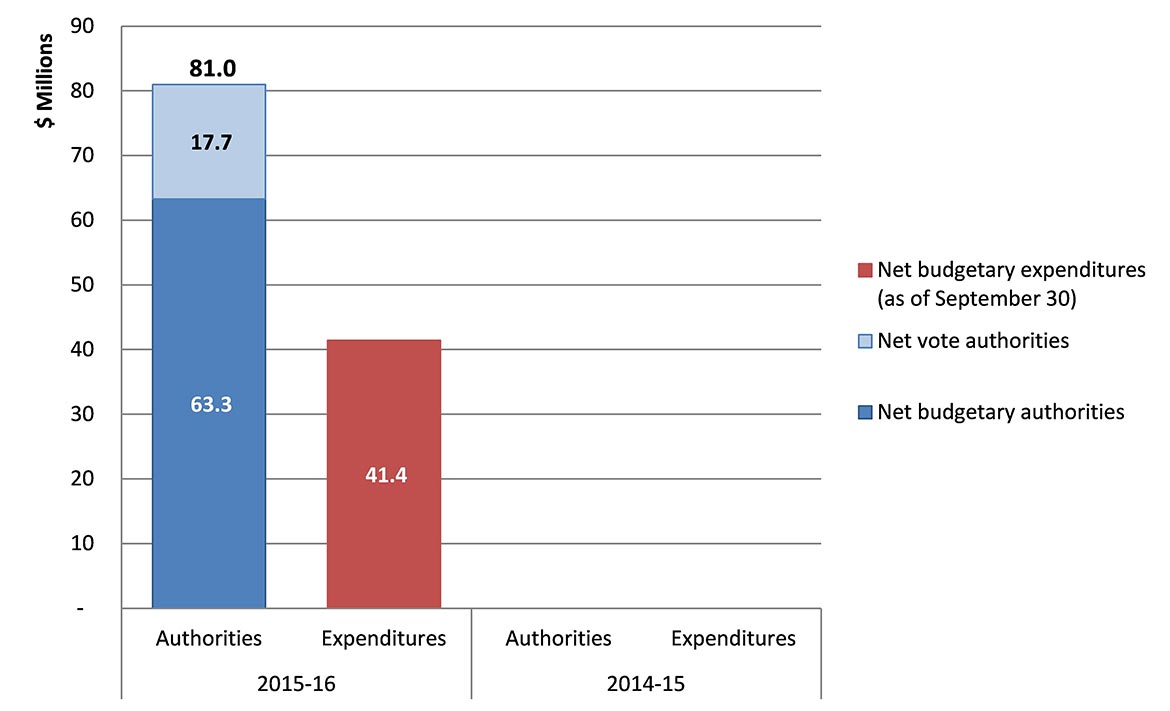 Chart Description: For the period ending September 30, 2015, the ATSSC had total authorities of $81.0 million, including $63.3 million of budgetary authorities and $17.7 million of vote-netted revenue. The ATSSC incurred a total of $41.4 million in expenditures in the first two quarters of fiscal year 2015-16.

The ATSSC incurred a total of $41.4 million in expenditures in the first two quarters. This represents approximately 51% of the total available authorities. The majority of the $41.4 million relates to personnel expenditures totalling $30.5 million, or 74% of the total expenditures for the quarter. The remaining 26% primarily comprises other subsidies and payments (mainly the balance of an advance payment to Employment and Social Development Canada (ESDC) for the administration of the Social Security Tribunal), professional and special services (mainly translation costs), and transportation and communications (mainly travel costs). Refer to the Departmental Budgetary Expenditures by Standard Object for more details.

There have been no significant changes to the programs or structure since the ATSSC was established on November 1, 2014. The Social Security Tribunal continues to be supported by ESDC as its full transition to the ATSSC is still in the planning stages.