A Strong and Growing Economy for the Middle Class

From: Department of Finance Canada

Across the country, a strong and growing middle class is driving economic growth—creating new jobs and opportunities for people to succeed.

Across the country, a strong and growing middle class is driving economic growth—creating new jobs and opportunities for people to succeed. Thanks to the hard work of Canadians, and supportive investments by the Government in people and in communities, Canada's economy is strong and growing, the unemployment rate is at its lowest level in 40 years, wages are rising at their fastest rate in eight years, business investment is recovering and the employment rate of working-age Canadians is at its highest level today than ever before in Canada's history.

Canadians work hard every day to build a better life for themselves and their families. Thanks to their efforts:

Canada's economy is strong and growing. At 3 per cent, Canada had the strongest economic growth of all the Group of Seven (G7) countries in 2017, and is expected to stay near the top this year and next.

There are more good, well-paying jobs. Canadians have created more than half a million new full-time jobs in the last three years, helping to push the unemployment rate to its lowest level in 40 years.

As a result of lower taxes and measures like the Canada Child Benefit, by this time next year a typical middle class family of four will have about $2,000 more each year to help with the cost of raising their children, save for their future, and help grow the economy for the benefit of everyone.

Canada's strong economy today makes it possible for the Government to continue investing in the middle class, laying a solid foundation for future generations. The Government is making future-focused investments in people, communities, and the economy while carefully managing deficits and protecting long-term fiscal sustainability. 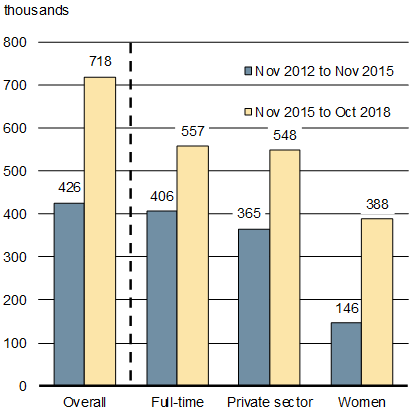 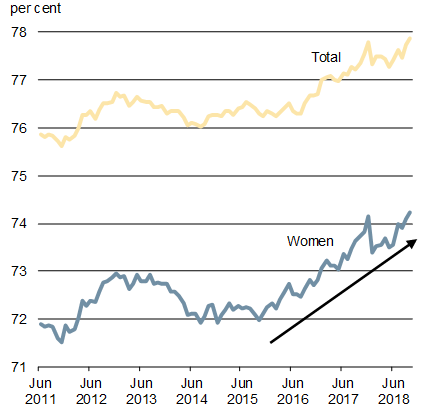 Stronger wage growth and more Canadians working in good, well-paying jobs have boosted consumer confidence over the past couple of years, which has further supported household spending. Recently, household spending growth has slowed, led by interest-rate sensitive spending. However, it remains at a solid pace. 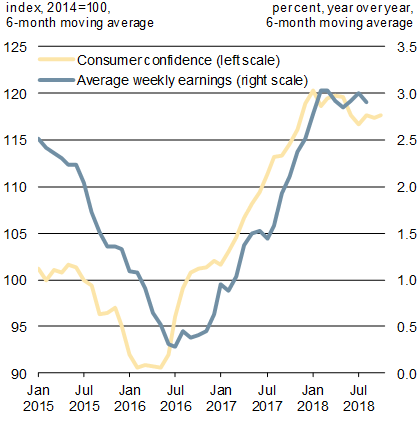 Notes: Survey of Employment, Payrolls and Hours average weekly earnings (all industries including overtime). Last data points are August 2018 for earnings and October 2018 for consumer confidence.
Sources: Statistics Canada; The Conference Board of Canada. 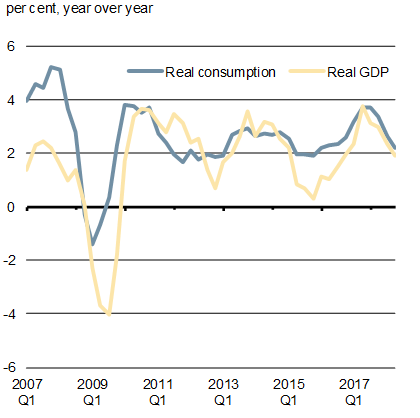 Businesses appear to be responding to capacity pressures, investing in a wide range of capital goods

Intensity at Which Industries Use Their
Production Capacity 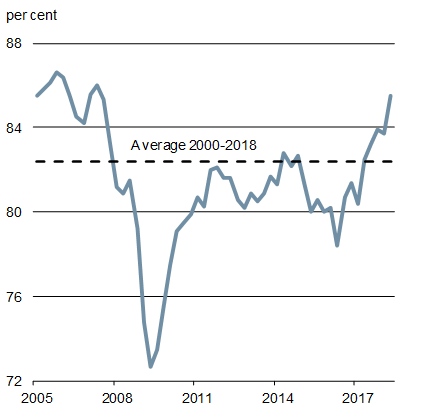 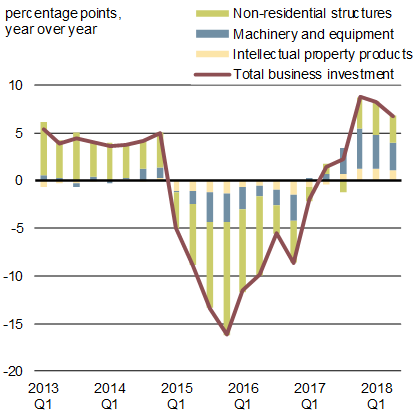 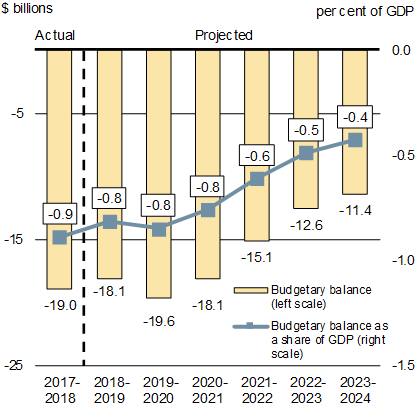 Note: 2017–18 has been restated to reflect the historical revisions published along with the Provincial and Territorial Gross Domestic Product by Income and by Expenditure Accounts for 2017, released on November 8, 2018.
Sources: Fiscal Reference Tables; Department of Finance Canada calculations. 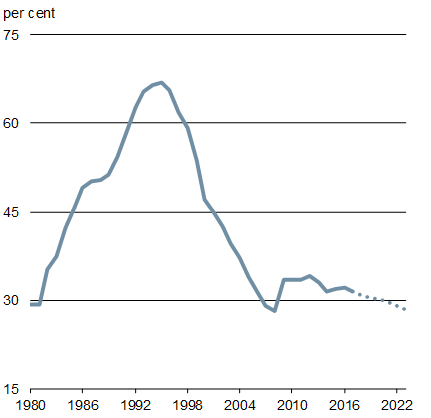 Note: Figures have been restated to reflect the historical revisions published along with the Provincial and Territorial Gross Domestic Product by Income and by Expenditure Accounts for 2017, released on November 8, 2018.
Sources: Fiscal Reference Tables; Department of Finance Canada calculations.

Prospects are good for continued growth in the Canadian economy—wages are rising at their fastest rate in eight years, and the recovery in business investment is expected to continue amid a positive investment climate. This will be further supported by measures included in the 2018 Fall Economic Statement and by the recently negotiated United States-Mexico-Canada Agreement on trade.

Canada's current positive outlook is also a reflection of our many competitive strengths, such as an abundance of natural resources, a highly skilled labour force, preferential access to global markets, and strong capacity for research, innovation and commercialization in important emerging fields.

While prospects are good, more work remains to improve the performance of Canada's economy and give hard-working middle class Canadians more opportunities to benefit from economic growth. The Fall Economic Statement takes the next steps to building an economy that works for everyone.