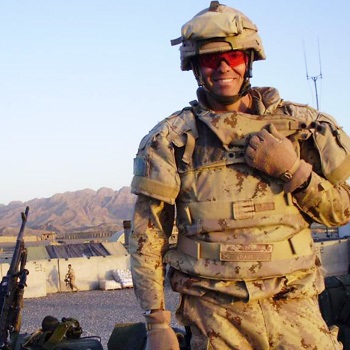 As the highest ranking Aboriginal member of the Canadian Armed Forces, Brigadier-General Jocelyn Paul has taken full advantage of the ‘limitless opportunities the Forces have to offer’ throughout his distinguished career. He served in Croatia in 1993-1994 as a platoon leader, and in 2009 as a battle group commander in Kandahar. He is currently deployed in Israel for Operation PROTEUS. When asked about his success, he claims, “I never planned to make it to the rank of Brigadier-General and I never thought that one day I would be involved in the Israeli-Palestinian peace process.”

My parents knew that the [Forces] was a great career opportunity and they were very encouraging in my decision to serve.

Brigadier-General Paul’s interest in a military career was sparked at a young age by his cousin who was serving in the Forces, and by his parents who saw the benefits of joining. “My parents knew that the [Forces] was a great career opportunity and they were very encouraging in my decision to serve.” In 1988, he took the plunge and joined the Reserve Force as an Infantry Soldier while completing a bachelor’s degree. He then transferred to the Regular Forces in 1991 while finishing a master’s program.

Brigadier-General Paul is an Infantry Officer and a member of the Royal 22nd Regiment. He says that the challenge of leading men and women in difficult situations is what pushed him towards pursuing that trade. His favourite part of the job is, “interacting with people and leading the best soldiers in the world.” He also finds globetrotting and having a positive impact on hard-hit communities and people’s lives to be very rewarding experiences.

In his spare time, he enjoys travelling with his family, as well as boating, hunting, and fishing. He also likes to read quite a bit about military, Canadian, and Aboriginal history. When it comes to balancing personal and professional commitments, he says, “I like to keep work issues at work as much as possible. When I go home, I focus on my family.”

According to Brigadier-General Paul, the ideal candidate for the Forces is, “A young man or woman willing to take any challenges and [is] eager to surpass him or herself.” He goes on to say that it’s important to follow your instincts, expand personal and professional networks, and listen to those who offer you a piece of advice.

Having already served for 27 years, when asked where he sees himself in five years, he responds by proudly saying, “Despite the fact that I will then be 53 years old, I will likely still be in uniform and ready to serve where my country needs me.”