125 Anniversary of the Confederation of Canada Medal

The official description, eligibility, criteria, and history of the 125 Anniversary of the Confederation of Canada Medal. 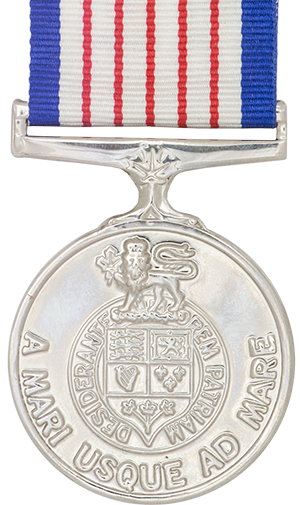 The medal was awarded to those making a significant contribution to their fellow citizens, their community, or to Canada. Persons deceased prior to 01 January 1992 were not eligible for consideration. This commemorative medal program is now closed. This medal is administered by the Chancellery of Honours at Rideau Hall.

Military nominees were selected by the chain of command based on merit. This medal program is closed.

The medal is circular in form, made of copper and zinc alloy, rhodium-plated (appears bright silver), and is 1.42 inches (36 mm) in diameter.

The ribbon is white with edges of blue and five red stripes equally spaced between the two blue stripes. It is similar to the Centennial Medal ribbon, except it has blue edges and one extra red stripe. The red and white are the official colours of Canada as appointed by King George V in 1921, the blue borders symbolize the motto of Canada, A MARI USQUE AD MARE (From sea to sea), and the five thin red stripes each represent a quarter century for one hundred and twenty five years.

The medal shall be worn in sequence prescribed in the Canadian Orders, Decorations and Medals Directive, and in the following manner: on the left breast, suspended from the ribbon described above, after the Queen's Silver Jubilee Medal and before the Queen's Golden Jubilee Medal.

There were 42 000 medals issued, of which 4 000 were awarded to members of the Canadian Forces.