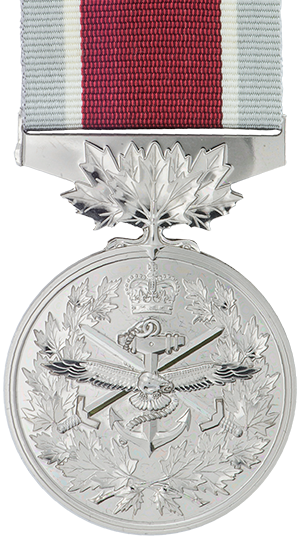 This general service award has been created as a means to recognize in a timelier manner those who provide direct support to operations in the presence of an armed enemy. Rather than creating a new honour for each new Canadian Forces (CF) operation as it arises, the General Campaign Star (GCS) and General Service Medal (GSM) — with their theatre or service specific ribbons — can be awarded in future to honour participation in any operation that meets the criteria provided that the service is not counted towards another service medal.

The General Service Medal (GSM) is awarded to members of the CF and members of allied forces serving with the CF who deploy outside of Canada — but not necessarily into a theatre of operations — to provide direct support, on a full-time basis, to operations in the presence of an armed enemy.

The GSM may also be awarded, depending on the operation, to Canadian citizens other than members of the Canadian Forces who are deployed outside Canada, either inside or outside a theatre of operations and working with the CF to provide direct support, on a full-time basis, to operations in the presence of an armed enemy.

The GSM is always issued with a ribbon specific to the theatre or type of service being recognized, and each ribbon has its own criteria.

Awarded to military personnel and Canadian civilians who served under the authority of the CAF:

Awarded to Canadian civilians who served under the authority of the CAF:

Awarded to military personnel and Canadian civilians who served under the authority of the CAF:

Awarded to Canadian civilians who served under the authority of the CAF:

Eligible service may be added to the eligibility list for the ribbon by the Chief of the Defence Staff in consultation with Armed Forces Council and on the recommendation of the Canadian Forces Honours Committee, provided the service in question meets the basic criteria and intent of the medal as described in the regulations.

The only civilians eligible are Members of the Public Service working for the CF, Canadian civilians under contract with the CF, and Canadian Police Officers serving under the authority of the CF in the locations and with the units described at the link above and between the dates indicated. Foreign civilians are not eligible for the GSM.

The only members of allied forces eligible are those who serve in missions on behalf of Canada. They are usually foreign exchange personnel who deploy with our units or personnel seconded to the CF specifically to serve in our missions. In all cases, they must be on the CFTPO filling a Canadian position, and they are usually assigned a CF service number. Foreign personnel working in concert with the CF or reporting to a Canadian superior in an international context are not eligible for Canadian service medals.

To be eligible to be awarded the Medal, direct support must be performed under Exceptional circumstances and the person must have been deployed specifically to provide this support on a full-time basis to the operations. Only when there is a certain level of risk, threat, hardship, or operational intensity can recognition be provided. Any support which is comparable in nature to normal duty or which is performed from the relative safety of a country distant from the theatre shall be excluded from eligibility.

The GSM is a silver-coloured circular medal, 36 mm across, bearing on the obverse a contemporary crowned effigy of Her Majesty the Queen of Canada surrounded by the inscriptions “ELIZABETH II DEI GRATIA REGINA” and “CANADA” separated by small crosses pattée. The crosses pattée represent military valour and merit. On the reverse are two crossed swords, an anchor, and a flying eagle superimposed on each other, the whole surrounded by two branches of maple leaves which form a wreath and surmounted by the Royal Crown. The wreath represents honour; the maple leaves represent Canada; the anchor, crossed swords, and eagle represent the three services of the Canadian Forces. The Crown as well as the effigy on the obverse represent the Queen of Canada and her role as the Fount of all honours.

A claw at the top of the medal is attached to a straight slotted bar. A central maple leaf overlapping two others ornaments this suspension.

The EXPEDITION ribbon is 32 mm wide with a central stripe of red (18 mm), on either side of which are stripes of white (2 mm) and light grey (5 mm). Red and white are the official colours of Canada as appointed by King George V in 1921.

The Medal is engraved on the edge with the service number, abbreviated substantive rank, initials, and surname of the recipient. Civilian recipients have only their name engraved on the Medal.

The rotation bars for the Medal are silver in colour with a raised edge and bear either one or five maple leaves.

Recipients of the GSM may be awarded a first Rotation Bar after a total of 210 days of eligible service, including the days taken into account for the award of the original medal, and additional bars are awarded for each subsequent period of 180 days.

The GSM-EXP shall be worn in the sequence prescribed in the Canadian Orders, Decorations and Medals Directive, and in the following manner:

The GCS and GSM were created by Her Majesty The Queen in March 2004. Initially, the medals were issued each with only one ribbon (those currently used for South-West Asia) with bars specifying the operation being recognized. Two bars were created, namely ALLIED FORCE and ISAF+FIAS.

The inaugural ceremony took place on 29 November 2004 in the ballroom of Rideau Hall in Ottawa. On this occasion, Her Excellency, the Right Honourable Adrienne Clarkson, CC, CMM, COM, CD, Governor General and Commander-in-Chief of Canada, presented the Medal to 17 representative recipients, 6 with ALLIED FORCE bar and 11 with ISAF+FIAS bar. The first presentations of the General Campaign Star were also made during that event.

In 2009, the GCS and GSM were modified so that the existing bars were abolished, being replaced with theatre or service-specific ribbons, thus allowing the use of bars to recognize multiple rotations where appropriate. The EXPEDITION ribbon was created at the same time to provide a flexible tool of recognition for operations for which it is not possible or practical to create a separate ribbon.

Captain Carl Gauthier of the Directorate of History and Heritage, DND, prepared the design. The Canadian Heraldic Authority at the Chancellery of Honours, Rideau Hall, completed the final artwork.