The official description, eligibility, criteria, and history of the International Commission for Supervision and Control Indo-China (ICSC). 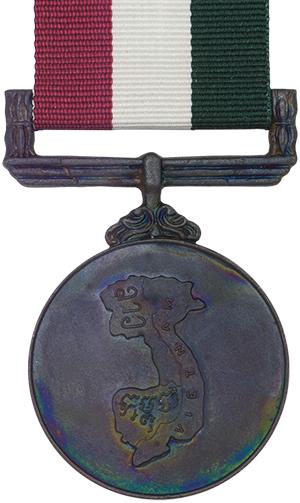 The ICSC Cambodia monitored the Geneva Accords and helped the Khmer resistance forces disband and return home and the Viet Minh to leave the country. Much of the work was done from 1954 to 1955, and Canada had only token representation after 1958. The commission withdrew completely in 1969.

The medal is a circular dark brown (bronze) medal, 1.42 inches (36 mm) in diameter:
On the obverse the emblem of the ICSC: crossed flags, a maple leaf on the left one and a central horizontal line on the right one, with a dove of peace where the flag staffs cross and lions between the flags facing left, centre, and right. Around the edge are the words INTERNATIONAL COMMISSION FOR SUPERVISION AND CONTROL - PEACE with the word PEACE at the bottom and in larger, more widely-spaced letters.
On the reverse the reverse has a map of Indochina showing the three countries — Vietnam, Cambodia, and Laos — with their names in the script of the respective countries.

A floral attachment is welded to the top of the medal and joins a wide bar marked with three indented horizontal lines. A narrow horizontal bar is held above the first bar by ends supports and the ribbon passes between.

The ribbon has three equal stripes of dark green, white, and red. The green represents India and the red represents Canada and Poland. The white stripe represents peace.

The medal shall be worn in sequence prescribed in the Canadian Orders, Decorations and Medals Directive, and in the following manner: on the left breast, suspended from the ribbon described above, after the Non Article 5 Medal for NATO Logistical Support to the African Union Mission in Sudan and before the ICCS medal.

The recipient's rank, surname and initials appear on the edge of the medal.
The following is a list of members who have died while serving in the theatre of operations: