The official description, eligibility, criteria, and history of the Non-Article 5 NATO Medal for Service on NATO Operation UNIFIED PROTECTOR - LIBYA. 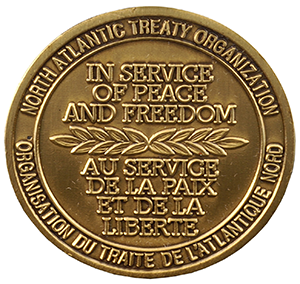 In the spring of 2011, a multi-state coalition began a military intervention in Libya in response to events during the Libyan civil war. The United Nations Security Council Resolution 1973 was implemented to create a Libyan no-fly zone and to take all necessary measures to prevent attacks on civilians by the government forces of Colonel Muammar Gaddafi. The NATO Operation UNIFIED PROTECTOR formally began on 23 March 2011 and ended on 31 October 2011.

Awarded for thirty consecutive or 60 cumulative days of honourable service under NATO Operation UNIFIED PROTECTOR commencing on 23 March 2011 and ending on 31 October 2011. Service as part of or in direct support of OUP within the political boundaries, territorial waters, and airspace of Libya is eligible as well as service in or over the central southern Mediterranean Sea between 10 degrees East and 28 degrees East and South of 41 degrees North, service at the support Bases of Trapani and Sigonella, and at NATO and Canadian Supporting Headquarters in Naples and Poggio Renatico (Italy).

Aircrew flying from a location other than those listed above will accumulate one day's service for the first sortie flown into the theatre on any day. Additional sorties flown on the same day receive no further credit.

The medal is always issued with a bar inscribed "OUP-LIBYA/LIBYE".

The medal shall be worn on the left breast, suspended from the ribbon described above, after the Non-Article 5 NATO Medal for North Atlantic Council Approved Operations and Activities in Relation to Africa and before the International Commission for Supervision and Control Indo-China (ICSC) Medal.