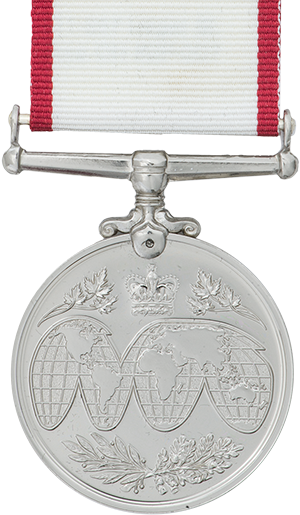 The OSM with HUMANITAS ribbon is awarded to eligible persons who served in approved humanitarian missions conducted in response to a disaster or human conflict including rescue, relief, and reconstruction outside Canada for at least 30 cumulative days between 1 August 2009 and 27 April 2015, or 14 cumulative days of service from 28 April 2015 onward.

This ribbon replaces the HUMANITAS bar to the Special Service Medal as of 1 August 2009. Those who earned the SSM-HUMANITAS retain it but no other eligible mission will be added to its eligibility list. The change was made because the SSM is reserved for members of the CF only and there was desire to recognize police officers and Canadian civilians serving with the CF and the police in humanitarian missions. Only service on approved humanitarian missions from 1 August 2009 onward can be credited toward this new medal.

Other eligible service may be added to the eligibility list for the ribbon by the Chief of the Defence Staff in consultation with Armed Forces Council and on the recommendation of the Canadian Forces Honours Committee, provided the service in question meets the basic criteria and intent of the medal as described in the regulations.

The only civilians eligible are Members of the Public Service or Canadian civilians under contract with the Government of Canada in the theatre and at the dates indicated. Foreign civilians are not eligible for the OSM.
The only members of allied forces eligible are those who serve in theatre on behalf of Canada. They are usually foreign exchange personnel who deploy with our units or personnel seconded to the CF specifically to serve in our mission. In all cases, they must be on the CFTPO filling a Canadian position and they are usually assigned a CF service number. Foreign personnel working in concert with the CF or reporting to a Canadian superior in an international context are not eligible for Canadian service medals.

The tradition generally followed since the mid-19th century has been to depict who the medal is from on the obverse, what the medal is for on the reverse, and who the medal is granted to on the edge. The effigy of Her Majesty and the Crown represent not only The Queen as Canada’s Head of State (highlighted by the word CANADA and the maple leaves on both sides of the medal) but also as the FONS HONORIS (the Fount of All Honours). The Queen is the only person who can create an official honour in Canada and all Canadian Honours are bestowed in Her name. The maple leaves represent Canada with those conjoined on one stem on the reverse coming from the Royal Arms of Canada. The globe represents the spectrum of Canada’s involvement and service throughout the world while the laurel and oak leaves represent honour, strength, and victory.

The ribbon is 32 mm wide with a central stripe of white (27 mm), on either side of which are stripes of red (2.5 mm). Red and white are the official colours of Canada as appointed by King George V in 1921, and white also represents the hope Canadians bring to people in need throughout the world.

The OSM-HUM shall be worn in the sequence prescribed in the Canadian Orders, Decorations and Medals Directive, and in the following manner: