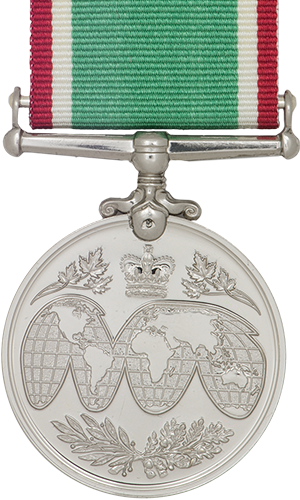 The OSM with SIERRA LEONE ribbon is awarded for 30 cumulative days of service in Sierra Leone between 31 July 2002 and 16 February 2013, or 21 cumulative days of service from 17 February 2013 onward. Primarily intended for CAF members who served with the British-led International Military Advisory and Training Team (IMATT) following the Lome Peace Agreement (Op SCULPTURE).

Service with the United Nations Mission in Sierra Leone (Operation CROCODILE) is not eligible for this medal as it is recognized by the award of the UNOMSIL/UNAMSIL Medal.

The tradition generally followed since the mid-19th century has been to depict who the medal is from on the obverse, what the medal is for on the reverse, and who the medal is granted to on the edge. The effigy of Her Majesty and the Crown represent not only The Queen as Canada’s Head of State (highlighted by the word CANADA and the maple leaves on both sides of the medal) but also as the FONS HONORIS (the Fount of All Honours). The Queen is the only person who can create an official honour in Canada and all Canadian Honours are bestowed in Her name. The maple leaves represent Canada with those conjoined on one stem on the reverse coming from the Royal Arms of Canada. The globe represents the spectrum of Canada’s involvement and service throughout the world while the laurel and oak leaves represent honour, strength, and victory.

The ribbon is 32 mm wide with a central stripe of light green (22 mm), on either side of which are stripes of white (2.5 mm) and red (2.5 mm). Red and white are the official colours of Canada as appointed by King George V in 1921, and the green comes from the flag of Sierra Leone.

The OSM-SL shall be worn in the sequence prescribed in the Canadian Orders, Decorations and Medals Directive, and in the following manner: