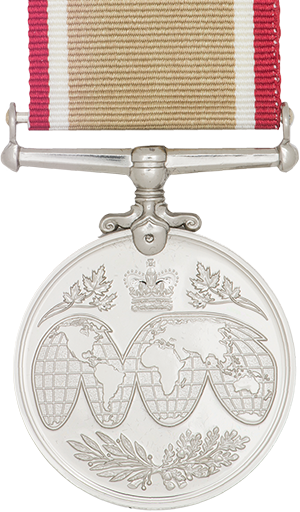 The OSM with SOUTH-WEST ASIA ribbon is awarded to non-DND eligible persons who served the theatre of operations consisting of the political boundaries of Afghanistan, the Persian Gulf, the Gulf of Oman, the Gulf of Aden, the Red Sea, the Suez Canal, and those parts of the Indian Ocean and the Arabian Sea that are west of sixty-eight degrees East longitude and north of five degrees South latitude, as well as the airspace above those areas, or provided direct support to operations conducted in those areas from outside Canada for at least 30 cumulative days between 7 October 2001 and 13 Mar 2014 or for at least 21 cumulative days from 14 March 2014 onwards.

Eligible service may be added to the eligibility list for the ribbon by the Chief of the Defence Staff in consultation with Armed Forces Council and on the recommendation of the Canadian Forces Honours Committee, provided the service in question meets the basic criteria and intent of the medal as described in the regulations.

The OSM is a silver-coloured circular medal, 36 mm across, bearing on the obverse a contemporary effigy of Her Majesty The Queen wearing a Canadian diadem composed of alternating maple leaves and snowflakes surrounded by the inscriptions “ELIZABETH II DEI GRATIA REGINA” and “CANADA” separated by small maple leaves. On the reverse of the Medal, from top to bottom, appear the Royal Crown on either side of which are three maple leaves conjoined on one stem, a Goode interrupted homolosine equal-area projection of the globe, and a laurel branch crossed with an oak branch.

The Medal is made of cupro-nickel and lacquered to prevent tarnishing. It is manufactured by the Royal Canadian Mint. The Medal is engraved on the edge with the service number, abbreviated rank, initials, and surname of military and police recipients and with the forenames and name of civilian recipients.

The ribbon is 32 mm wide with a central stripe of sand colour (22 mm), on either side of which are stripes of white (2.5 mm) and red (2.5 mm). Red and white are the official colours of Canada as appointed by King George V in 1921, and the sand colour represents the challenge of the South-West Asia theatre of operations.

The rotation bars for the Medal are silver in colour with a raised edge and bear either one or five maple leaves.

The OSM-SWA shall be worn in the sequence prescribed in the Canadian Orders, Decorations and Medals Directive, and in the following manner: